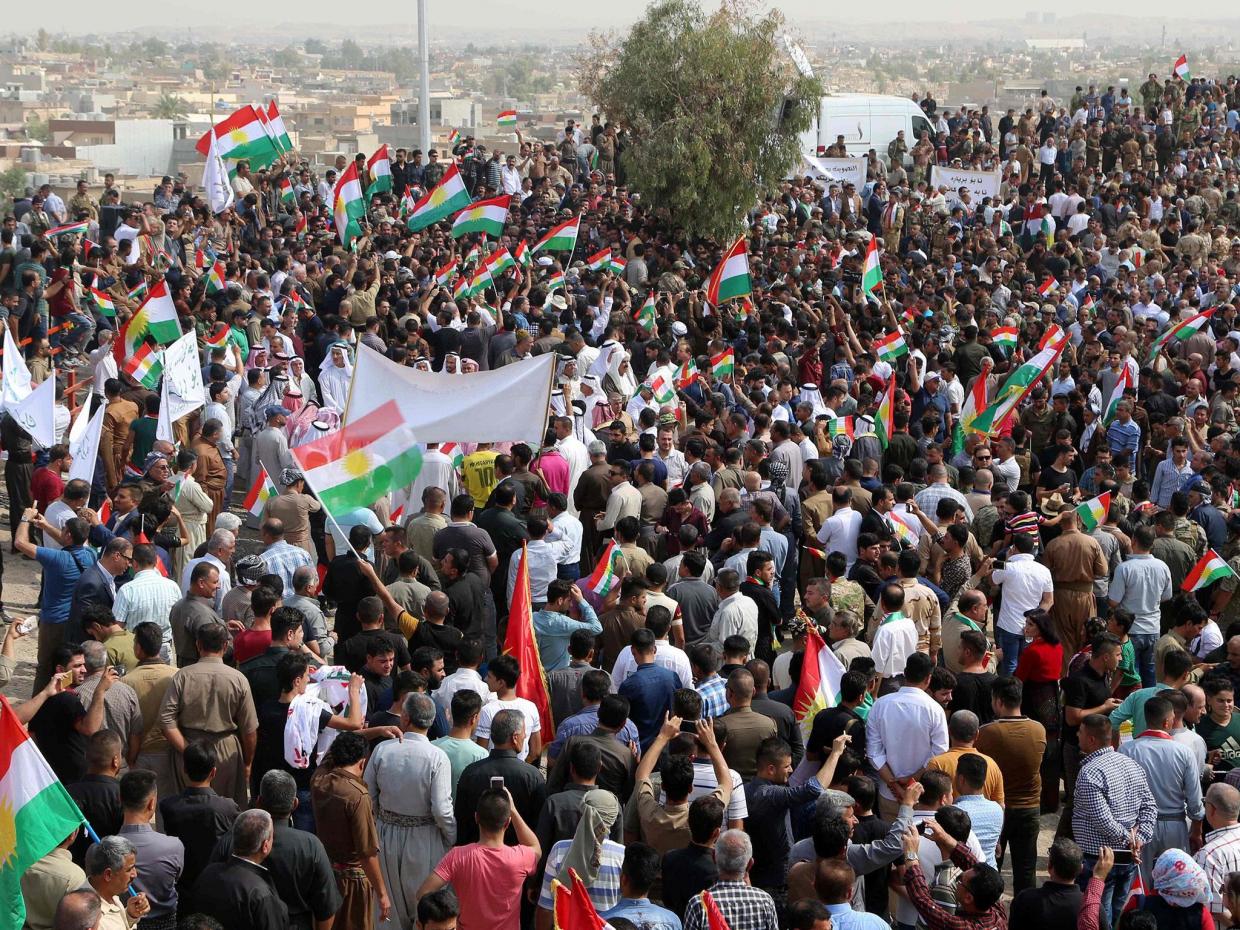 The Kurdish leadership is coming under intense international pressure to postpone the referendum on independence due to take place in Kurdish-controlled parts of northern Iraq on 25 September.

Outside powers see the poll as destabilising Iraq and neighbouring countries at the very moment when Isis and its self-declared caliphate are being defeated. But Kurdish President Masoud Barzani, who called the referendum, says he intends to go ahead with it and it would be a humiliating failure for him to back down at this late stage, having rekindled the fires of Kurdish nationalism so successfully.

“Barzani and his advisers do not take the threats from Iran and Turkey seriously, saying that they have heard them all before and nothing happened,” says the veteran Kurdish leader Omar Sheikhmous. He adds: “I hope they are right.”

He himself warns that the Kurds are very isolated regionally and internationally, pointing out that the UN, US, UK, France and Germany are opposed to the referendum, as are neighbouring states such as Iran and Turkey as well as the Iraqi government in Baghdad. He draws a parallel with the historic betrayal of the Iraqi Kurds by the US and Iran to Saddam Hussein in 1975, when they similarly found themselves without allies.

Mr Barzani is accused by his critics of calling the poll to secure his own power as leader of the Kurdistan Regional Government (KRG) and head of the Kurdistan Democratic Party (KDP) by exploiting Kurdish patriotism. He can take advantage of the weakness and divisions of his traditional Kurdish political rival, the Patriotic Union of Kurdistan, which cannot oppose a referendum without being charged with betraying the Kurdish right to self-determination for which they have fought for 100 years.

By playing the nationalist card, Mr Barzani also diverts the attention of voters away from the disastrous economic state of the KRG since 2014 when it lost its share of central government oil revenues and the price of its own oil plummeted. Irbil is full of half-completed buildings with rusting cranes beside them while many government employees have not been paid for months.

Even if the referendum was born out of political manoeuvring within Iraqi Kurdistan, it has now built up its own momentum as Kurds rally around their red, white and green flag. There have been enthusiastic mass rallies all over KRG. “Barzani has shown that he is a real leader and has stood up to pressure to cancel the vote,” says Kamran Karadaghi, a commentator on Kurdish affairs and previously chief of staff to the former Kurdish President of Iraq Jalal Talabani. He recalls that politicians and officials in Baghdad used to make jokes in the past about Kurdish threats to secede from Iraq, but believes they will do so no longer.

Mr Karadaghi says that the Baghdad government has made a mistake in “denouncing the referendum as a sort of Frankenstein”, which will inevitably produce violence and war. He believes that this overreaction on the part of Baghdad and foreign powers serves only to anger and provoke the Kurds, citing as an example the threat by former Iraqi Prime Minister Nouri al-Maliki who demanded this week that the referendum be cancelled and said that “we will not allow the creation of a second Israel in northern Iraq”.

Despite the political uproar it has provoked, the referendum does not oblige Mr Barzani to secede from Iraq and establish an independent Kurdish state, though it will show that such a move has massive popular support. It will be very different from the British vote for Brexit in the referendum in 2016 because it does not force Kurdish leaders to break away from Iraq. A more certain result of the referendum will be that it will bolster Mr Barzani and the KDP in presidential and parliamentary elections 35 days later on 1 November. Previously, he held his post unconstitutionally, having outstayed his term as president which ran out in 2015, and effectively closed down the Kurdish parliament by preventing its speaker entering the Kurdish capital Irbil where it sits.

In Irbil, the KRG authorities do not appear to have taken any concrete measures on the ground to open the way to practical independence. This is partly because the KRG already behaves, in most respects other than international recognition, very much like an independent state, having achieved political and military autonomy under a US air umbrella when Saddam Hussein withdrew the Iraqi army in the aftermath of the Gulf war and Kurdish uprising in 1991. This was enhanced further by the US invasion in 2003 when the Kurdish peshmerga joined the anti-Saddam coalition, advancing south and capturing Kirkuk and Mosul. They later withdrew from Mosul city, though not from much of the province around it, but never from Kirkuk and its oil fields.