Iraq’s Resistance Reveals How U.S. Troops Will Be Removed From Its Country 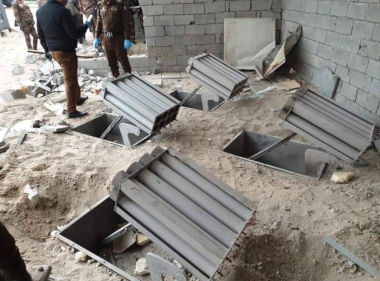 Yesterday the U.S. attacked five sites in Iraq and killed 3 Iraqi soldiers of the 19th Division, two policeman and a civilian. The strikes came after some 10+ rockets, fired by unknown people, had hit the joint base Camp Tali and had killed 2 U.S. and one British soldiers.

Today the U.S. received the revenge for its strikes.

The U.S. Central Command had argued that the “defensive precision strike” against the five sites created deterrence i.e. they would prevent other attacks:

Even hawkish analysts find that the argument is nonsense.

The U.S. claims that the group Kataib Hezbollah, part of the Popular Mobilization Forces (PMF) and under command of the Iraqi government, fired the missiles. But the positions the U.S. hit were not Kataib Hezbollah positions. U.S. intelligence in Iraq is not up to date with regards to where Kataib Hezbollah units or those of the other 20+ PMU groups are stationed.

After asking a military source in 19th Commando Division about the Al-Atheer facility and presence of “Iranian missiles”, the response I got was that KH withdrew from the site 7+ days ago and the unit took their place.
So yeah, the Mussayib site was under Iraq Army.

British forces were supposed to join yesterday’s U.S. strike but the Wall Street Journal reports that the Brits were called back by their government because the attribution of the original rockets strike to Kataib Hezbollah was shady and because there was no legal justification for the strikes.

The Iraqi government announced that it would protest at the United Nation about the U.S. breach of its sovereignty. Ayatollah Sistani condemned the U.S. attack and even the Iraq Joint Operational Command, which includes coordinating U.S. officers, protested against the strikes.

The Iraqi parliament and government have told the U.S. to leave Iraq. The Trump administration is not willing to do that. In consequence more U.S. soldiers will have to die in Iraq.

That the “deterrence” strikes did not deter anything was proven today when another rocket salvo was fired at Camp Taji in broad daylight:

A hail of rockets landed on a military base housing U.S. and other coalition troops north of Baghdad Saturday morning, wounding three coalition soldiers and two Iraqi soldiers.

The same base, Camp Taji, was the target of a rocket attack on Wednesday which killed three servicemen, including two Americans and one British.

The U.S. in Iraq is not fighting some “Iran backed” groups but is an occupation force and therefore a legitimate target for Iraqi government forces:

“We can’t forget that the PMF is a recognized entity within the Iraqi security forces; they aren’t isolated from the security forces and often are co-located on the same bases or use the same facilities,” said Sajad Jiyad, a researcher and former managing director of the Bayan Center, a Baghdad-based think tank.

“Now the (Iran-backed) groups who supported the initial strike in Taji, who were the most outspoken, feel obliged, authorized, maybe even legitimized to respond, ostensibly to protect Iraqi sovereignty but really to keep the pressure up on Americans,” he added.

“There are no red lines anymore,” Jiyad said.

(I bet $10 that the “(Iran backed)” in that quote is not from Sajad Jiyad but was added by the NBC/AP writer or editor. Sajad Jihad often stresses that these groups do have motive and means to act on their own.)

(Added: Sajad Jihad has now confirmed to me that the politicizing words in the parenthesis are not from him but were added by the NBC/AP writers.)

The Iraqi police found the launch site from where today’s rocket volley was fired. Its pictures tell a lot about how this fight will go on until the U.S. occupation forces leave Iraq.

This is a fixed camouflaged position under a roof. It was probably built months if not years ago. The launcher cases were dug into the ground of some shed. They were already adjusted to the planned strike direction. To launch the rockets one had simply to clear the top of camouflage, pull up the rocket launcher from the front and set the height adjusting stick up. One man could do that within a few minutes. The electrical launch command would then come from remote by a wire or cellphone.

The setup of the position reminds one of similar positions the Lebanese Hizbullah has built in Lebanon and Hamas in Gaza. The people who set up this launch position in Iraq seem to have received some training from experienced staff.

If there is one well prepared positions aimed at Camp Taji how many others are there? Ten? One hundred? Or even a thousand? How many exist around other sites in Iraq where U.S. troops are stationed?

Previous strikes had come from mobile platforms. That the resistance in Iraq now revealed one of its fixed camouflaged launch sites is intentional. It is a warning to the U.S. to ponder about the above questions and potential consequences.

These secret launch sites are a real deterrence. In 2006 Israel attacked Hizbullah in Lebanon with the intention to disarm the group. But Hizbullah’s defenses were stubborn and hundreds of rockets were fired each day against Israeli positions. Israeli bombers then tried to find the launch sites but those where hidden and not detectable from the air. In the end it was Israel which had to file for peace. Since then its forces have not dared to again enter Lebanon.

The U.S. in Iraq has no way to protect its troops from such unpredictable rocket volleys. It has no way deter or even win against the forces that are now working to evict it from Iraq as well as other places in the Middle East.

It should finally recognize that and leave.