Is the global economy heading for another recession?

Posted by Editor on Thursday, November 8, 2018 · Leave a Comment 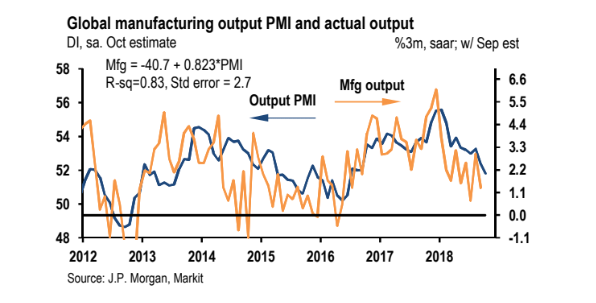 The mid-term Congressional elections saw a swing to the opposition Democrats in the Lower House and the Republicans were ousted as the majority party.  This is a blow to President Trump who mounted a campaign based on fear of immigrant caravans flooding into the US from Latin America and supposed rising crime provoked by the Democrats. This line of attack did not work.  But the perceived strong US economy seems to have had the effect of consolidating Trump’s position in the Senate.  There the Republicans gained seats. Losing control of the lower house means that any further tax and financial handouts to big business and the rich are likely to be curtailed. But as the Republicans increased their hold on the Senate,Trump can expect to continue with his wild foreign policy outbursts and his ‘trade war’ with China.

Although there are more ‘progressive’, Sanders-type Democrats elected to Congress, the Democrat party remains a stalwart supporter of (and funded by) Wall Street and big business. As Democrat House leader Nancy Pelosi has made clear, “I have to say, we’re capitalist ― and that’s just the way it is”. She added that “However, we do think that capitalism is not necessarily meeting the needs with the income inequality that we have in our country.”  But she says nothing about how to reverse this income inequality (let alone wealth inequality).  Even the ‘left wing’ of the Democrats as led by Senator Elizabeth Warren, stay firmly in the capitalist camp – merely looking for ways to make it “accountable”.

So the Americans now face a second half of the Trump presidential term with little changed.  Except that there are increasing concerns that the supposed Trump economic boom is fast coming to an end. Back in August, I said that Q2 2018 would be the peak in US growth as the effect of Trump’s one-off cuts dissipate, with the impact of Trump’s protectionist policies on global growth to factor in.  “Economic activity is weakening again in Europe.  And then there is the emerging ‘emerging market’ debt crisis – Argentina, Turkey, Venezuela onto Brazil and South Africa.  So the last quarter is not going to be exceeded this quarter.”

And so it has proved.  Ex-Goldman Sachs chief economist and now writer for the UK’s Financial Times, Gavyn Davies delivered his latest global economic forecast.  Headlining the piece as “Global slowdown begins to look more troublesome”, Davies reckons the recent stock market ‘correction’ was “remarkable for its extent, the frequency of consecutive negative days, and the synchronised decline in all the major markets.”  Investors were becoming increasingly worried about a new global economic recession.

Davies goes on that “the flow of economic data suggest that there was indeed a decline in world activity in October.”  And he agrees with my own April conclusion that “the global growth rate clearly peaked late in 2017”.  He concludes that “the period of above trend average growth that was so powerful last year proved short-lived and now seems to have been mainly cyclical, rather than secular, in nature.”  Exactly.

Davies estimates that global economic growth has slowed from 5% in 2017 to just a 3% rate now, about 0.7% below the long-term trend.  China is slowing, Europe is slowing, only the US has been holding up.

Davies reckons the US is set to slow from here as Trump enters the next two years of his presidency.  However, Davies is still confident that world capitalism will be fine because “a significant slowdown in the US should be offset by rebound in China, Japan and the Eurozone” so that growth will get back on trend.

This optimistic view (which probably remains the consensus among mainstream economic views) is not supported by others.  John Mauldin put it simply in a recent post on his blog: “All good things come to an end, even economic growth cycles. The present one is getting long in the tooth. While it doesn’t have to end now, it will end eventually. Signs increasingly suggest we are approaching that point. Whenever it happens, the next downturn will hit millions who still haven’t recovered from the last recession, millions more who did recover but forgot how bad it was, and millions more who reached adulthood during the boom. They saw it as children or teens but didn’t feel the full impact. Now, with their own jobs and families, they will. Again, there’s no doubt—none, zero, zip—this will happen. The main question is when.”

Mauldin’s main argument for a fast approaching new recession is one spouted by the Austrian school of economics, represented in official circles by the Bank for International Settlements (BIS), an international research agency for the world’s central banks.  And the cause of the next recession for the BIS?  Burgeoning global debt and the cost of servicing that debt.  Mauldin points out the huge rise in public sector debt levels that Trumps tax cuts and big business handouts are creating. “We are one recession away from having a $30 trillion US government debt total. It will happen seemingly overnight. And deficits will stay well above $1 trillion per year every year after that, not unlike now.”

I too have emphasised the rising level of debt both before the global financial crash and the Great Recession and after – contrary to the perception that I am just a ‘monocausal’ rate of profit man!  The high level of debt was a trigger for the crash of 2008-9; has been a depressing factor on the ability of the major capitalist economies to recover to previous rates of growth; and will be an important trigger in the next recession.

But it is corporate debt that is much more important as the motivator of a crash than the public debt that the neoclassical supporters of ‘austerity’ always look at.  Household and corporate debt is growing fast, too, and not just in the US.  Mauldin explains that US companies are significantly more leveraged now than they were ahead of the 2008 crisis. “We saw then what happens when the commercial paper market seizes up, and that was without a Fed in tightening mode. Now we have a central bank both raising short-term rates and slowly ending its crisis-era accommodations. Recent comments from FOMC members say they have no intent of stopping, either. A few high-profile junk bond defaults could ignite fears quickly.”  Everywhere now central banks are tightening liquidity (graph below of the top four central banks rate of money ‘printing’).

Mauldin warns: “There are trillions of dollars of low-rated corporate debt that can easily slide into the junk debt category in a recession. Since most public pension, insurance, and endowment programs are not legally allowed to own junk-rated debt, I can see where it could easily cause a debt crisis along the lines of the previous subprime crisis.”

What the Austrians don’t explain is why rising corporate debt could become a trigger for a new crisis – apparently it is just a fact of life in capitalist expansion like having a wild party one night eventually turns into a long and painful hangover the next morning.  The Marxist explanation is that when the profitability of capital in the productive sectors of the economy falls away, then credit is no longer the handmaiden of investment-led growth but turns into an oppressive squeeze of profits and production. Credit helps to fuel a rising economy but increases the degree of the crash when it comes, and then slows the recovery as credit becomes debt that weighs down on revenues and profits.  Below is a table that shows how increased debt since the end of the Great Recession no longer helped real GDP growth but hindered it.

And that is the danger ahead.  As the BIS showed in a September report, there is a large number of what are called ‘zombie’ businesses in the major economies which do not earn enough profits to cover the interest on their existing debt.  So they cannot invest and grow but just become the ‘undead’.  Around 12-15% of all quoted companies in the major economies are in this position – and this before interest rates on debt have risen significantly.

So can Trump and the US economy avoid a recession in the next two years?  Davies reckons that the US can because the rest of the world will recover to faster growth.  But there is no evidence that profitability, investment and production are likely to pick up in 2019 in Europe, Japan or the rest of Asia.  On the contrary, look at the latest measure of business activity in the Eurozone – the so-called PMI.  The composite PMI came in at 53.1 in October 2018, the weakest growth rate in the private sector since September 2016 as manufacturing expansion eased to a near four-year low (PMI at 52.0 vs 53.2 in September) and services output rose the least since January 2017 (PMI at 53.7 vs 54.7 in September).

And just look at the state of the Italian economy, as Italy’s budget with the EU takes on a Greek-style battle.

Then there is the UK.  British capital is suffering from the uncertainties of Brexit.  British small and medium-sized British factories are braced for the worst profits outlook in at least nine years, according to a recent survey that showed companies putting investment plans on ice ahead of Brexit.

Globally, manufacturing output growth is dropping back fast to 2016 levels.

According to JP Morgan economists and their model, overall global growth slipped back to a 3% annual rate in October, after peaking at about 3.7% at the beginning of 2018.

And there are increasing signs that US economic growth has also peaked.  The latest real GDP report for Q3 2018 showed a 3.5% annual real GDP growth rate (or 3% up from the same period in 2016).  But 2.1% of that GDP growth was actually inventory building, ie stock not sold.  Eventually production will have to slow so that this stock can be run down. And the Atlanta GDP Now forecast for the fourth quarter of 2018 is 2.9%, a further slowing.

Also in Q3. US non-residential business investment grew only 0.8% annualized, a sharp deceleration from the first quarter’s 11.5% rate.  Capital spending had accelerated from a slump in 2015 because mining, oil and gas investment rebounded as energy prices rose. Excluding mining, oil and gas, business spending on structures such as offices, factories and stores did jump in the first quarter, perhaps because of the Trump tax cut, but then cooled.

Moreover, non-financial profits remain below 2014 levels and, as I showed in a recent post, the rate of profit on capital in the US last year was flat at best over 2016, and well below the level of 2014.

The slower the US economy grows and the more the Federal Reserve hikes interest rates, the more the squeeze will be on the capitalist corporate sector and its ability to service their debts. Economists at Goldman Sachs, who have compiled ‘financial conditions’ into a single index, estimate that easier financial conditions helped bolster growth throughout 2017, led by surging stocks. In 2018 that contribution ebbed, as stocks plateaued and then in recent weeks dropped. Combine flat to lower stocks with higher bond yields and a generally firm dollar, and Goldman estimates financial conditions are now subtracting from, rather than adding to, growth, and that drag will peak in mid-2019.

There is a simple macro accounting identity for Marxists (the opposite of the Keynesian):  Profits + Government surpluses = Investment and the Current Account. If profits are set to fall while Trump runs huge government deficits (6% of GDP), then investment must fall and the current account deficit (3% of GDP) must narrow. That means a collapse in production and imports – a slump.

Timing a recession is notoriously hard (I’ve tried!).  And this long, crawling depressive ‘recovery’ has defied the odds; as only one recovery on record (from 1991-2001) has lasted as long as a decade. But there will be no escape for American capitalism as Trump enters the second half of his presidential term.