Is There a Plot to Depopulate Palestinian Refugee Camps in Lebanon? 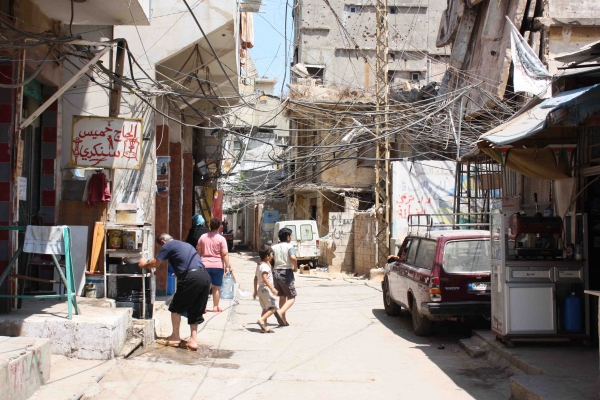 An eerie video composed of a recorded audio prayer and a photo of one ‘Hajj Jamal Ghalaini’ occasionally pops up on Facebook. The voice is that of an alleged religious sheikh, praying for the well-being of the man in the photo for saving the Palestinian refugee youth of Lebanon, by facilitating their departure to Europe.

The video would have been just another odd social media post, were it not for the fact that Ghalaini is a real person, with his name recurring in the ongoing tragedy of Palestinian refugees in Lebanon. Many have credited their successful ‘escape’ from Lebanon by citing this person, who, kindly, they say, has made the journey to Europe far cheaper than all other human smugglers.

We know little about Ghalaini, except that he seems to operate brazenly, without much legal repercussions from Lebanese authorities or the Palestine Liberation Organization (PLO), which is, supposedly, the caretaker of Palestinian refugees in Lebanon.

Something strange is going on.

Immediately after the US Administration of Donald Trump began to promote its ‘Deal of the Century’, Palestinian refugees – a fundamental issue in the Palestinian national struggle which has been relegated years ago – have, once more, taken center-stage.

Although Trump’s plan is yet to be fully revealed, early indications suggest it drives to sideline Jerusalem entirely from any future agreement between Israel and the Palestinian Authority. Moving the US embassy from Tel Aviv to Jerusalem, and Trump’s own assertion that ‘Jerusalem is off the table’ is enough to confirm this assumption.

Another component of Trump’s ‘deal’ is to resolve the issue of refugees without their repatriation and without respecting international law, especially United Nations Resolution 194, which calls for the Right of Return for Palestinian refugees and their descendants, who were driven out from their homes in historic Palestine in 1948.

Many news reports have been pointing to an elaborate American plot to downgrade the status of refugees, to argue against UN figures indicating their actual numbers and to choke off UNRWA, the UN organization responsible for refugees’ welfare, from badly needed funds.

Lebanon has been a major platform for the ongoing campaign targeting Palestinian refugees, particularly because the refugee population in that country is significant in terms of numbers and their plight most urgent in terms of its need for remedy.

There appears to be an active plan, involving several parties, to deprive Lebanon’s Palestinian population from their refugee status and to circumvent the ‘Right of Return’.

To some, this may seem like wishful thinking, since the ‘Right of Return’ is ‘inalienable’, thus non-negotiable.

Yet, obviously, without refugees collectively demanding such a right, the issue could move from being an urgent, tangible demand into a sentimental one that is impossible to achieve.

This is why the depopulation of Lebanon’s refugee camps, which is happening at an alarming speed, should worry Palestinians more than any other issue at the moment.

I spoke to Samaa Abu Sharar, a Palestinian activist in Lebanon and the director of the Majed Abu Sharar Media Foundation. She narrated that the nature of the conversation among refugees has changed in recent years. In the past, “almost everybody from young to old spoke about their wish of returning to Palestine one day; at present the majority, particularly the youth, only express one wish: to leave for any other country that would receive them.”

It is common knowledge that Palestinian refugees in Lebanon are marginalized and mistreated most, when compared to other refugee populations in the Middle East. They are denied most basic human rights enjoyed by Lebanese or foreign groups in Lebanon, or even rights granted to refugees under international conventions. This includes the right to work, as they are denied access to 72 different professions.

Left hopeless, with a life of neglect and utter misery in 12 refugee camps and other ‘gatherings’ across Lebanon, Palestinian refugees have persisted for many years, driven by the hope of going back to their Palestinian homeland one day.

But the refugees and their Right of Return are no longer a priority for the Palestinian leadership. In fact, this has been the case for nearly two decades.

The situation has worsened. With the Syrian war, tens of thousands more refugees flooded the camps, which lacked most basic services. This misery was further accentuated when UNRWA, under intense US pressure, was forced to cancel or downgrade many of its essential services.

A suspiciously timed census, the first of its kind, by the Lebanese Central Administration of Statistics, conducted jointly with the Palestinian Central Bureau of Statistics last December, resolved that the number of Palestinian refugees in Lebanon stands at only 175,000.

The timing is interesting because the survey was conducted at a time that the US Administration has been keen to lower the number of Palestinian refugees, in anticipation of any future agreement between the PA and Israel.

According to UNRWA statistics, there are more than 450,000 Palestinian refugees who are registered with the UN.

There is no denial about an influx of Palestinian refugees wanting to leave Lebanon. Some have done so successfully, only to find themselves contending with the misery of yet a new refugee status in Europe. Expectedly, some have returned.

Clearly there are those who are keen to rid Lebanon of its Palestinian population, thus the disregard for Ghalaini and other such human trafficking networks.

“There is more than one organized network that facilitate the immigration of Palestinians at prices that have recently gone down to make it more accessible to a larger number of people,” Abu Sharar told me. The conclusion that many of these young men and women now draw is that “there is no future for them in Lebanon.”

This is not the happy, triumphant ending that generations of Palestinian refugees in Lebanon have hoped and fought for over the years.

Ignoring the misery of Palestinian refugees of Lebanon is now coming at a heavy price. Relegating their plight till ‘the final status negotiations’, a pipe dream that never actualized, is now leading to a two-fold crisis: the worsening suffering of hundreds of thousands of people and the systematic destruction of one of the main pillars of the Palestinian refugees ‘Right of Return.’