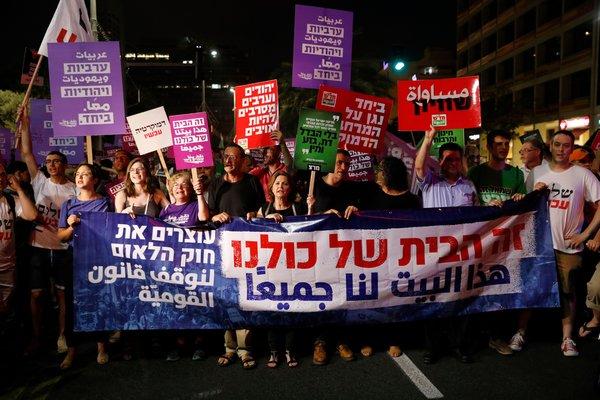 On July 19, 2018, the Israeli Knesset enacted a law that illegally enshrines a system of apartheid. The legislation, which has the force of a constitutional amendment, strips away any pretense that Israel is a democracy. Moreover, it violates customary and treaty-based international law.

Absent is any guarantee of self-determination for the 1.8 million Arabs who comprise 20 percent of Israel’s population. But, “we refuse to be second-class citizens,” said Ayman Odeh, chairman of the Joint List, the Palestinian parties in the Knesset. Odeh added that Israeli Prime Minister Benjamin Netanyahu’s regime is “digging a deep pit of fear, racism and authoritarianism to divide us from each other. But they can never erase us from the homeland we share.”

Members of the Knesset — Israel’s parliament — had tried for seven years to enact such a law. Although Barack Obama, like US presidents before him, supported Israel’s apartheid policies, Donald Trump took that support to a new level by recognizing Jerusalem as the capital of Israel in December 2017.

Adding insult to injury, the new law proclaims Hebrew the official language of Israel, with Arabic granted “a special status.”

Only Jews are welcome to emigrate to Israel under this law. And it purports to legalize the illegal Jewish settlements on occupied Palestinian land, stating, “The state views the development of Jewish settlement as a national value and will act to encourage and promote its establishment and consolidation.”

Adalah, the Legal Center for Arab Minority Rights in Israel, declared that the new law “entrenches the privileges enjoyed by Jewish citizens, while simultaneously anchoring discrimination against Palestinian citizens and legitimizing exclusion, racism, and systemic inequality.”

In a statement analyzing the law, Adalah refuted Israel’s claim of being a democracy: “No country in the world today is defined as a democratic state where the constitutional identity is determined by ethnic affiliation that overrides the principle of equal citizenship.”

Although Israel has long practiced discrimination against Palestinians, the Basic Law will pose obstacles to litigation in support of human rights. “It will make it much harder for us to challenge any cases of discrimination against Palestinians, because this racist notion of Judaization will become a constitutional norm,” Adalah attorney Suhad Bishara said. “Before this law, there have been opportunities to challenge these practices based on constitutional norms. This space to challenge will disappear, because Jewish superiority is now constitutional.”

This law does not even mention non-discrimination, equality or minority rights, and thus violates the Convention Against Racial Discrimination, a treaty Israel has ratified. That convention requires states parties to “condemn racial segregation and apartheid and undertake to prevent, prohibit and eradicate all practices of this nature in territories under their jurisdiction.” Racial discrimination is defined in the convention as “any distinction, exclusion, restriction or preference based on race, color, descent, or national or ethnic origin which has the purpose or effect of nullifying or impairing the recognition, enjoyment or exercise, on an equal footing, of human rights and fundamental freedoms in the political, economic, social, cultural or any other field of public life.”

Furthermore, the new law’s encouragement of the building of Jewish settlements on Palestinian lands violates the Fourth Geneva Convention and the Rome Statute. Both treaties prohibit an Occupying Power from transferring parts of its own civilian population into the territory it occupies. And both treaties consider such transfer to be a war crime.

The Basic Law Institutionalizes the System of Apartheid in Israel

Israel has long maintained a system of apartheid. Israel controls all ingress and egress to Gaza, limits Gazans’ access to medicine, subjects Palestinians to arbitrary arrest, expropriates their property, maintains separate areas and roads, segregated housing, different legal and educational systems for Palestinians and Jews and prevents mixed marriages. Only Jews, not Palestinians, are allowed to return to Israel-Palestine, in spite of international laws guaranteeing the Palestinians’ right of return.

“The Nation-State bill that Israel passed … cements Israel as an apartheid state — from the West Bank to Gaza to Jerusalem to Haifa,” Rabbi Alissa Wise, deputy director of Jewish Voice for Peace, said in a statement.

Moreover, under the Rome Statute, “inhumane acts committed in the context of an institutional regime of systematic oppression and domination by one racial group over another racial group, with the intent to maintain that regime” constitute apartheid.

Both the Apartheid Convention and the Rome Statute classify apartheid as a crime against humanity.

Israel has not ratified the Apartheid Convention or the Rome Statute. But apartheid is prohibited by jus cogens.

Last year, Richard Falk, former UN special rapporteur on human rights in the Palestinian territories and professor emeritus at Princeton University, and Virginia Tilley, professor of political science at Southern Illinois University and an authority on apartheid, co-authored a report commissioned and published by the UN Economic and Social Commission for Western Asia.

That report found “beyond a reasonable doubt” that Israel’s treatment of the Palestinians constitutes “the crime of Apartheid,” which the authors characterized as a “crime against humanity under customary international law and the Rome Statute of the International Criminal Court.”

The report concluded by recommending participation in Boycott, Divestment and Sanctions (BDS), a nonviolent worldwide movement challenging the Israeli occupation.

The BDS movement was launched in 2005 by representatives of Palestinian civil society. They called upon “international civil society organizations and people of conscience all over the world to impose broad boycotts and implement divestment initiatives against Israel similar to those applied to South Africa in the apartheid era … [including] embargoes and sanctions against Israel.”

This call for BDS specified that “these nonviolent punitive measures” should last until Israel fully complies with international law by 1) ending its occupation and colonization of all Arab lands and dismantling the barrier wall; 2) recognizing the fundamental rights of the Arab-Palestinian citizens of Israel to full equality; and 3) respecting, protecting and promoting the rights of Palestinian refugees to return to their land as stipulated in United Nations General Assembly Resolution 194.

“If ever there was a time for boycott, divestment and sanctions against Israel’s system of oppression, it is now,” said Omar Barghouti, co-founder of the BDS movement, in response to Israel’s Basic Law. “No Israeli law will erase our right to self-determination in our homeland or the right of our refugees to return home. No Israeli far-right government, with all the … support it receives from xenophobic and outright fascist forces in the United States and Europe will ever extinguish our aspiration for freedom, justice and equality.”

Marjorie Cohn is professor emerita at Thomas Jefferson School of Law, former president of the National Lawyers Guild, deputy secretary general of the International Association of Democratic Lawyers and an advisory board member of Veterans for Peace. An updated edition of her book, Drones and Targeted Killing: Legal, Moral, and Geopolitical Issues, was recently published.
Feature image:A protest in Tel Aviv this month against the new law, which has been advanced as flagship legislation of the most right-wing and religious governing coalition in Israel’s 70-year history.CreditAbir Sultan/European Pressphoto Agency, via Shutterstock
Tweet