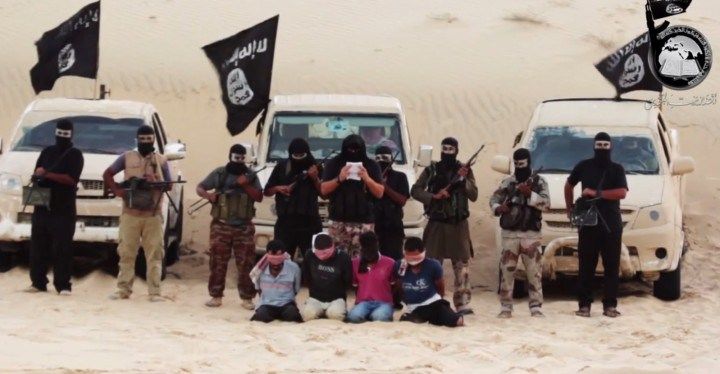 Thirty thousand barrels of oil a day. $19 million a month. That’s apparently the revenues that are flowing to the Islamic State. Its oil exports flowing through Turkey. And now and investigative report accuses Israel of being one of the principal middlemen for Islamic State oil. Now joining us to talk about how all this works, and how it can work given supposedly the bombing campaigns that are going on, is Vijay Prashad. Vijay joins us from Northampton, Massachusetts. He’s the George and Martha Kellner Chair in South Asian History, professor of international studies at Trinity College. His latest book is Letters to Palestine: Writers Respond to War and Occupation. Thanks for joining us again, Vijay.

JAY: So first of all, what do we know about how the oil gets out? It seems a little bizarre to me that such industrial-scale exports can take place without all the various countries that are supposedly attacking IS being able to stop this.

PRASHAD: Well, first I should say that there are a number of reports and studies that have been conducted. The Financial Times has done some reporting. Al-Araby Al-Jadeed has done a major study on the I think 26th of November, which they called Raqqa’s Rockefeller. The Russian government has released their own paper on what they claim is going on between the ISIS territory, Turkey, and Israel. I did a report called ISIS Oil. So there’s a number of people who have been looking at the phenomena of ISIS oil and how it’s both being taken out of the ground and where it’s going, how ISIS is able to make money.

The story is rooted actually in phenomena that predate ISIS. In other words, there are oil fields in northern Iraq in the Kurdish autonomous region where for many years the Iraqi regional government of Kurdistan has been in some kind of competition with the government in Baghdad, the central government. And oil has been siphoned out of these northern fields, these Kurdish fields, into, onto big trucks, smuggled into Turkey. And then they’ve gone out through [sehan] port, through Malta, often to Israel.

So this is a rather old network that has at least been going for 15 years or so. When ISIS took control of these fields about 18 months ago, they simply used the same networks, smuggling networks. They organized it, they’ve created in Mosul a, you know, an institution called Office of Resources, which controls things that were as far afield as oil smuggling to soft drink distribution. They do a variety of things, this Office of Resources.

As far as the oil is concerned, they’ve, as I said, utilized the old smuggling rings that had been used by the Kurdish regional government, so that oil travels across the border into Turkey. There is some preliminary refining that happens, because Turkey at least in this respect seems to be rather particular that you can only bring crude oil into Turkey if you have a license from the Iraqi government. If the oil is partly refined, then it can cross without that license. So there’s crude refining of the oil. Bribes are paid at the border. And the trucks cross over and dispatch their crudely refined order onto trucks of another smuggling network. So the first set of trucks will return, essentially, to Mosul and to the oil fields in Iraq, and some of them in [inaud.] in eastern Syria.

Inside Turkey, the al-Araby al-Jadeed report skims this over, but here the story is quite fascinating. Because you know, yes, indeed, al-Araby al-Jadeed shows that there is a influential middleman. They call him Uncle Fareed. Fareed had, you know, he has various names, who at least takes charge of some of the trucking networks. But once the oil comes into mainstream Turkey, particularly in the three ports, one in which is [sehan] port, which is run by the Turkish government, there is a mysterious company called BMZ which takes control. And it turns out that BMZ has a familiar name as one of its owners. And that’s the third child of President Recep Tayyip Erdogan, and his name is Bilal Erdogan.

And Bilal Erdogan is one of the owners of BMZ. BMZ recently bought two major oil tankers. Why would they be buying oil tankers unless the flow of oil had increased in recent months? And they, through [sehan], take the oil out to Malta, where it is, again, ship, put onto a different ship, and it goes to Israel. From where it is either consumed in Israel, or it’s laundered or sold out to European markets. To that’s basically how the oil flows.

What we don’t quite know yet, and I think what requires some investigation, is how the finance works. You know, how the payments are taking place. The banking networks that are involved, et cetera. But most of the money as far as the Islamic State is concerned, up to the border with Turkey, is done in cash. So there the question of banks don’t apply. That’s essentially, you know, how the oil travels.