Israel: Netenyahu in alliance with neo-Nazis 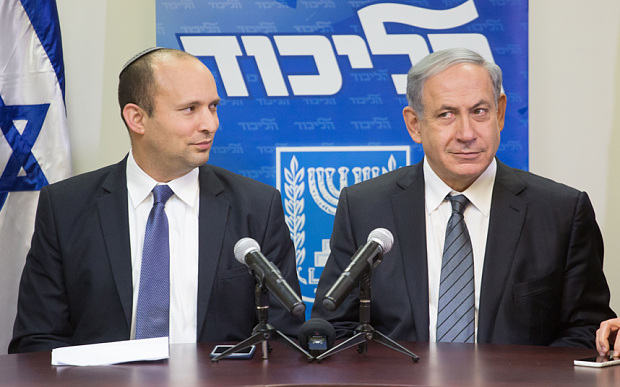 In 1984 rabbi Meir Kahane of the ultra-nationalist Kach party entered the Israeli parliament (knesset), having received over 25,000 votes. Kach stood on a programme which, as The Times of Israel’s Michael Aarenau noted, even members of rightist Likud party likened to the Nazis’ 1935 Nuremberg race laws.[1]https://blogs.timesofisrael.com/banned-in-1988-assassinated-in-1990-mainstreamed-in-2019-kahane-lives/?utm_source=The+Blogs+Weekly+Highlights&utm_campaign=blogs-weekly-highlights-2019-02-21&utm_medium=email

In 1988, when polls suggested that Kach could get between four and 12 seats, Kahane was banned from standing by the supreme court. The reason had nothing to do with opposition to racism, but a fear that the image of Israel would be damaged. In the four years that Kahane was a knesset member, when he spoke all the other 119 members would often walk out.

However, even in 1984 what Kahane said openly the other Zionist parties muttered behind closed doors. But yesterday what was trefa (unclean) has now become kosher. What used to be Zionism’s forbidden fruits have now become its delicacies.

Fearing defeat by the centre-right bloc of Benny Gantz’s Resilienceand Yair Lapid’s Yesh Atidparties,Binyamin Netanyahu, Likud’s leader, called on the far-right Jewish Home and National Union religious settlers’ parties to unite with Otzma Yehudit,the direct descendants of Kach, to contest the April 9 elections to the knesset. He hopes that such an alliance would win enough representation and give Likud the coalition partners needed for it to retain office. Netanyahu has reportedly promised the new bloc two ministries.

One can get an idea of Otzma Yehudit’spolitics from its leader, Michael Ben Ari, who was a member of the knesset, representing the National Union, between 2009 and 2013. Apart from instigating a pogrom against black African refugees in south Tel Aviv, Ari is famous for tearing up a copy of the New Testament that a missionary sent him and putting it in a trash bin.

In September 2010, responding to an observation that, for every Israeli killed, six Palestinians had died, he remarked: “For every one dead on our side, we need to kill 500, and not six.” Ben-Ari holds leftwing Jews and human rights organisations in particular contempt, referring to them as “germs” that need to be eradicated. During the 2012 ‘Operation Pillar of Defence’, he stated: “There are no innocents in Gaza … Mow them down! Kill the Gazans without thought or mercy!” This is the man who Netanyahu is going out of his way to ensure will be a member of the next knesset.

It would be wrong, however, to simply concentrate on Otzma Yehudit. There is also Jewish Home – which had six members of the last government, including the education and justice ministers – and is no slouch, when it comes to racism and bigotry. Jewish Home knesset member Bezalel Smotrich, who describes himself as a “proud homophobe”, has distinguished himself by advocating separate maternity wards for Jewish and Arab women, on the grounds that his wife did not want to give birth next to a woman whose child might become a “terrorist”. However, despite the outrage these comments provoked, it is a fact that five of Israel’s seven major hospitals allow Jewish women to give birth in Arab-free wards.

In 2013, the deputy defence minister, rabbi Eli Ben Dahan of Jewish Home, openly stated of Palestinians: “To me, they are like animals – they aren’t human.” Despite considering gays an abomination, he holds that “A Jew always has a much higher soul than a gentile, even if he is a homosexual.”

The Israeli far right today commands at least 250,000 votes. But it is split between at least four parties, meaning that these votes could be wasted. When Kahane was elected in 1984, Israel’s proportional representation system meant a party which gained 25,000 votes was guaranteed a seat, but in the 2013 knesset the threshold was increased from 2% to 3.25%. The idea was to exclude the Arab parties – but the latter united to form the Joint List, becoming the third largest grouping in the knesset, with 13 seats.

So now, in the words of Ynet, “A dynasty of racism and provocation is on its way to the Israeli parliament.”[2]www.ynetnews.com/articles/0,7340,L-5467651,00.html  Yet Israel’s Arab population will ask, what is new? Whether it was Labor or Likud in government, they have suffered ongoing violence and institutional discrimination. What we are seeing today is Zionist ideology and practice catching up with each other. Whereas Israeli Labor governments spoke the language of collectivism and social democracy, they practised ethnic cleansing and exclusion. But the new, openly fascist right has taken the hypocrisy out of Zionism and in the process left Labor Zionism high and dry.

When Meir Kahane preached that Israel could either be a Jewish state or a democratic state he was stating a truth that generations of ‘left’ Zionists have preferred to ignore. Labour Zionism spoke of a ‘Jewish democratic state’, which was always an oxymoron. What happens if the Arabs’ higher birth-rate meant they become the majority? Would the Zionist parties acquiesce in a non-Jewish state or would there be a new round of ethnic cleansing, as in 1948?

In other words which is more important: a democratic or a Jewish state? For Zionism a Jewish state was always the most important goal – which was why a Jewish majority was ensured for the new Israeli state through the expulsion of 90% of the Arabs in 1948. In the words of one of the key organisations of Israeli apartheid, the Jewish National Fund (JNF), “over 70% of the Jewish population in Israel opposes allocating … land to non-Jews, while over 80% prefer the definition of Israel as a Jewish state, rather than as the state of all its citizens”.[3]www.kkl-jnf.org/about-kkl-jnf/kkl-jnf-id/jewish-people-land.

Successive Zionist governments, beginning with the Labor administrations of 1949-77, were opposed to mixed marriages and sexual relationships between Jews and Arabs. That was why marriage between a Jew and a non-Jew was made impossible. As Hannah Arendt noted at the time of the Eichmann trial in 1961,

Israeli citizens, religious and non-religious, seem agreed upon the desirability of having a law which prohibits intermarriage … there certainly was something breathtaking in the naivety with which the prosecution denounced the infamous Nuremberg laws of 1935, which had prohibited intermarriage and sexual intercourse between Jews and Germans.[4]H Arendt Eichmann in Jerusalem Old Saybrook 2011, p7.

But what Labor and Likud whispered under their breath Kahane and the thugs of Lehava openly practised. During his four-year stint in the knesset Kahane proposed a series of laws which outlined what a Jewish theocratic state would look like. They included:

Not only did much of this come straight from the 1935 Nazi Nuremburg law: much of it merely codified existing practice.

For example, hundreds of communities in Israel are Jewish-only. That was the purpose of the 2011 Admissions Committees Law: to keep out Arabs (as well as black and Sephardi Jews). This was reinforced by the 2018 Jewish Nation-State Law, which advocated Jewish settlement as a “national value”. The JNF has been implementing Jewish-only settlement since the early 20th century, but the difference is that Israel’s far right now wishes to make explicit that which was always implicit. What was previously normal, but not written down in law, is now becoming codified and rigid.

If the idea of Arabs as slaves seems far-fetched, we should remember that the Sephardic chief rabbi of Israel, Ovadia Yosef, ruled in 2016 that non-Jews should be expelled from Israel – apart from a few, who “will be allowed to remain in the land and fulfil roles reserved for gentiles in the service of Jews”.[5]www.timesofisrael.com/chief-rabbi-non-jews-shouldnt-be-allowed-to-live-in-israelThat role was made clear in a sermon he gave in 2010. “Goyim [non-Jews] were born only to serve us. Without that, they have no place in the world – only to serve the people of Israel.”

Even though Kahane died at the hands of an assassin in 1990, his ideas have lived on. The coming elections are likely to see the further decline of labour Zionism – Meretz, which as the ‘Marxist’ Zionist Mapam was the second largest party in the 1949 knesset, may be wiped out entirely. The Israeli Labor Party, which until 1977 formed every single government, is presently forecast to gain less than 10 seats (down from 24).

Naturally this is causing apoplexy among Zionism’s liberal supporters. Batya Ungar-Sargon, opinion editor of Forward, has stated that “Netanyahu just invited Israel’s equivalent of the KKK to join the government”.[6]https://forward.com/opinion/419676/netanyahu-just-invited-israels-kkk-to-join-the-government-american-jews/?utm_source=PostUp&utm_medium=email&utm_campaign=Daily%20Newsletter%20RSS&utm_maildate=02/21/2019 Ungar-Sargon wrote: “These are the David Dukes and the Richard Spencers of the Jewish state – people who believe that Jewish sovereignty depends on the oppression, ethnic cleansing and even murder of Israel’s Arab population.” Although, of course, oppression, ethnic cleansing and murder are hardly novelties for the Palestinians.

American Jews, who have been shaken by the recent murder of 11 of their compatriots at Pittsburgh, are amongst the most liberal of America’s white population. They are especially sensitive, since the Trump administration combines white supremacy, demonisation of refugees and a not-too-hidden anti-Semitism with ardent support for Israel and Zionism. They are looking aghast, as Israel moves off the political radar.

The American Jewish establishment is also shaken not just by the open association of Netanyahu’s open association with fascists and racists, but by his brazenness. For decades these leaders have turned a blind eye to all sorts of racist atrocities and provided cover for Israel’s repeated massacres. But what they cannot stand is that Israel no longer seems to care what others think of it. They know Trump will support them regardless. As Susie Gelman, a major Zionist philanthropist, asks, “Is there any line of decency and morality that [Netanyahu] will not cross?” She complains that “Netanyahu’s actions are feeding the estrangement of young American Jews from Israel”, which is her real concern, before assuring her interlocutors that “I still feel committed to the Israeli people”, making a fatuous distinction between the Israeli government and “the people of Israel”.[7]ww.haaretz.com/us-news/.premium-u-s-jewish-leaders-slam-netanyahu-for-promoting-kahanists-1.6957235  Perhaps it has not occurred to Ms Gelman that the reason why Netanyahu can get away with what he does is that the Israeli people support and vote for him.

As Ha’aretz notes, the main concern of America’s Jewish establishment is not the fact of Israeli racism and ethnic cleansing, but that “Netanyahu’s move will hurt Israel’s image and create rift with Jewish Americans.”[8]w.haaretz.com/us-news/.premium-u-s-jewish-leaders-slam-netanyahu-for-promoting-kahanists-1.6957235

It is hard to stifle a laugh when the CEO of the Anti-Defamation League, Jonathan Greenblatt, whines. “There should be no room for racism and no accommodation for intolerance in Israel or any democracy.”[9]https://twitter.com/IfNotNowOrg Where, one wonders, was Jonathan when the chief rabbi of Safed, Shmuel Elihayu, issued an edict in 2011, declaring that Jews were forbidden to rent rooms and apartments to Arabs? When criticised, Eliyahu was backed by hundreds of Israeli rabbis. To this day Eliyahu is a paid state official.

Zionism is coming out in its true colours. The old hypocrisies have become redundant. Ideology and practice are being brought into line. The logic of a Jewish ethno-nationalist state is, self-evidently, that non-Jews do not belong – just as Jews themselves were not welcome in similar states in the Europe of the 1930s.

Today there are large elements in Israel, in particular amongst the religious Zionists, for whom the Palestinians represent the ancient foe of the Hebrews, the Amalekites. In Exodus 17:14, God told Moses: “I will utterly blot out the memory of Amalek from under heaven” – every man, woman and child would have to die. For those who are aware of the biblical story of Esther, Netanyahu is indeed the Jewish Haman.