Israel: The Struggle of Refugees and Palestinians is One 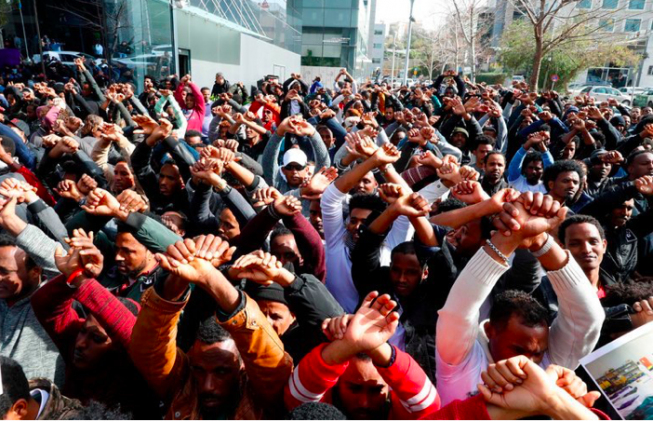 There have been two important developments these past weeks in Palestine. The first began on March 30 in Gaza, when the Israeli army brutally massacred 18 Palestinian demonstrators, with hundreds wounded. The murders took place during Land Day demonstrations, a yearly commemoration of the 1976 murder of six Palestinians demonstrating against land theft in 1948 Israel. The massacre coincided with the Jewish holiday Passover, which, in bitter irony, symbolizes the liberation of Jews from slavery in Egypt. Just a few days later, the IDF shot and killed nine more Palestinians at a demonstration.

The second event is the announcement by the Israeli government that it will no longer seek to deport African refugees back to Africa, where they will face persecution, misery and in many cases, almost certain death. Instead, 16,000 refugees will be deported to Western countries (although it is still not entirely clear which countries have agreed to accept refugees), and the rest will be settled in different parts of the country.

These two phenomena may seem independent but they are deeply connected. The plight of both the Palestinian people and of the African refugees stem from the racist nature of the Zionist colonialist state, and only by uniting can their oppression be ended.

For years now, African refugees in Israel have been the victims of a savage campaign of racist incitement. As early as 2012, an anti-refugee demonstration held by Likud MKs and Zionist fascist groups led to what can only be described as a pogrom, where both refugees and Israelis of color were attacked by the incited mob. Since then, refugees have been the victims of violence and persecution, with the threat of deportation constantly looming over their heads. Indeed, many have already been deported, with fatal results.

Over time, this wave of racist incitement met with resistance by refugee, progressive and left-wing groups. This movement came to a head just over a week ago, when a demonstration against the planned deportation of the refugees attracted a crowd of some 20,000 people to Rabin Square in Tel-Aviv.

The turn-out was impressive, and the roster of speakers and participating organizations included both refugees and Mizrahi Jews, specifically from the poor neighborhoods of Southern Tel-Aviv. This is significant, since the government has been cynically exploiting the worsening conditions in these neighborhoods — a direct result of its attacks on the standard of living of the working class — to turn the people of the neighborhoods against the refugees. In contrast to this, Mizrahi activists have pointed out the connection between the Mizrahi and refugee struggles.

However, all is not well. Although this unity in struggle is admirable and has managed to attract the support of many Israelis, it has come at a price. A telling moment came during the speech by refugee activist Monim Harun, where he received rapturous applause after mentioning that he had to flee Sudan’s “Islamist” regime. Loud applause was also heard whenever a speaker thanked the audience for supporting the refugees, and several speakers took pains to stress that they would leave Israel the moment they could return to their home countries.

These may seem like petty criticisms, but they in fact demonstrate a dangerous strategy: garnering sympathy for the refugee struggle by playing into the racist logic of the majority of the Israeli public.

The Danger of Divide-And-Rule

Last week, the refugee struggle claimed a major victory: Israeli Prime Minister Binyamin Netanyahu has officially cancelled his original plan to deport the refugees to African countries, where many of them would be in danger. This follows a decision by the supreme court, announced a few days after the pro-refugee demo, to delay the deportation.

This is an important victory, which leftists must support. But it is only a partial victory. Many refugees still face deportation, and others will be forced to relocate within the country. Lives will still be uprooted, and this solution still plays into the Zionist idea that the mere presence of non-Jews in the country is insidious. African refugees in Israel will still face racism and discrimination, and as time goes by and their number increases, the campaign against them will surely return, more pitched and nasty than ever.

It is also impossible to ignore the timing of this announcement, just as the mass murder of 18 civilians by Israel at the Gaza border was widely condemned, with evidence surfacing of premeditated murder and the complicity of army command. By momentarily taking the jackboot off the necks of the refugees and applying it to a more standard victim, Israel can lessen the pressure it faces and encourage refugees to not demand a more radical solution to their problems. This need by the Zionists to save face has only increased since 9 more were murdered in a more recent protest.

It is worth pointing out that this divide-and-rule tactic cuts both ways: two months ago, Interior Minister Arye Dery said that he prefers Palestinians take the jobs currently given to the African migrants. This is especially cynical given Dery’s membership in a government that has continued to attack the working class, poor and especially the Palestinian people as a whole, both in the 1948 and 1967 territories. But it also plays on the same logic with which speakers at the refugee protest asked to sooth the Israelis: “The Palestinians are not coming to live in south Tel Aviv, they are not coming to live here – they come to work in the morning and return [home] at night.” In other words, Dery has more faith in the Zionist state’s ability to control the Palestinians through a racist apartheid policy.

As is always the case with Palestine, the root problem is the racist and colonialist nature of Zionism, which seeks to drive out the Palestinian people and maintain a Jewish majority in as much of the territory of Palestine as possible. As long as this situation persists, Palestine will never be safe for Palestinians, Africans, or indeed, even Israeli Jews.

A joint movement of Palestinians and Africans is not without basis. Despite not being revolutionary parties, support from Hadash and Balad for the refugee struggle shows that there is widespread sympathy for this struggle from 1948 Palestinians. In place of the cynical attempts of Zionist politicians to promise jobs to one group at the expense of the other, Palestinians and Africans could fight together for a better future for all. Such a movement would not only be important in its own right, but will be a boon to the struggles against oppression and imperialist exploitation all over the region.