Kirkuk redux was a bloodless offensive. Here’s why 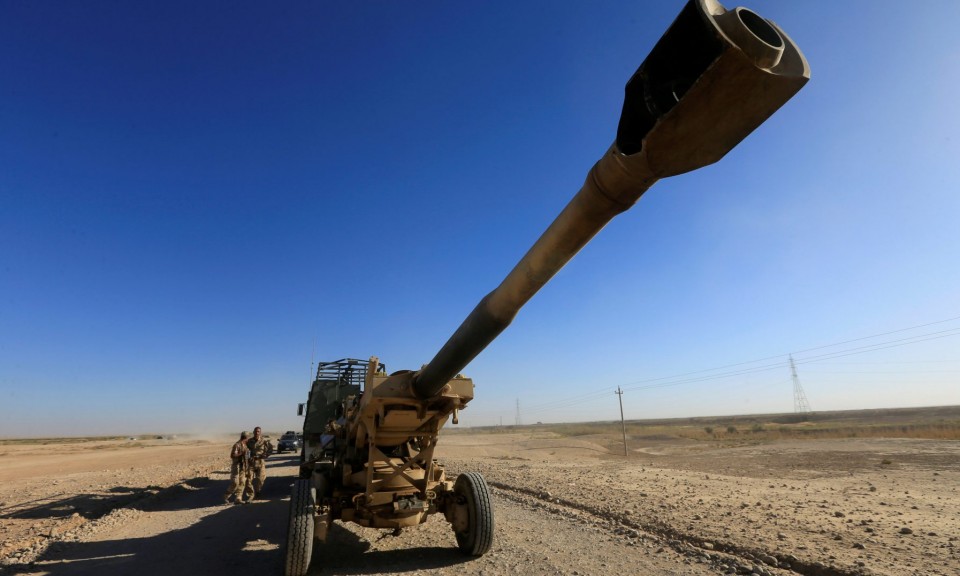 The Battle of Kirkuk lasted less than 24 hours. In a lightning – and mostly bloodless – offensive, the Iraqi Security Forces (ISF) retook control of the North Oil Co. and North Gas Co. headquarters, the K1 military base, the Bai Hassan oil field, and two domes of the Kirkuk oil field on Monday.

Baghdad did what it had previously said it would do: reestablish federal authority over the key strategic assets of Kirkuk province, which had been controlled by the Kurdish Peshmerga since the 2014 Islamic State offensive.

But why did it take only 24 hours? There are two main reasons. One, the eternal, internal split between the Kurdistan Regional Government (KRG), led by wily tribal schemer Masoud Barzani, and the Patriotic Union of Kurdistan (PUK) party of the late Jalal Talabani; and two, a brokered deal for Baghdad’s advance.  The Kurdish Peshmerga described the takeover as “a flagrant declaration of war” and vowed that Baghdad will pay a “heavy price.” That’s largely rhetorical.

The Pentagon – which has 10,000 US troops still in Iraq and is allied with Baghdad in the fight against ISIS but kept close links with the Kurds during the 2003-2008 occupation years – has been essentially helpless. The “coalition” the Pentagon essentially leads against ISIS insisted clashes between Peshmerga and Iraqi government forces were a mere “misunderstanding,” and stressed it is not supporting any of the belligerents.

Kirkuk province was occupied by the Peshmerga in 2014 as the Iraqi Army collapsed and ISIS occupied Mosul and its environs.

The KRG has been autonomous, in practice, ever since Daddy Bush imposed a no-fly zone on Saddam Hussein’s Iraq after the 1990-91 Gulf War. It is composed of three provinces: Sulaymaniya, Erbil and Dohuk. Annexing Kirkuk is pure wishful thinking.

Still, Kirkuk was included in the recent referendum on independence (92% said “yes”), which Iraqi Prime Minister Haider al-Abadi has repeatedly stated violated the Iraqi constitution as the Kurds “chose their personal interests over Iraq’s interests.”

Kirkuk is largely mixed: there are Kurds, Arabs (both Sunni and Shi’ite), Turkmen and Assyrian Christians. Historically, Kurds consider Kirkuk as “our Jerusalem” and refuse the 1960s-1970s “Arabization” that made it more Iraqi.

The 2005 Iraqi constitution – with predominant Shi’ite and Kurdish input, and largely influenced by Washington – included the possibility of a referendum in Kirkuk. This referendum never happened. What happened after 2014 was some “soft” ethnic cleansing by Barzani: nearly three million non-Kurds were “encouraged” to flee Kirkuk province.

The holy of the holies, once again, is oil. Kurdistan’s energy reserves are estimated at around 45 billion barrels of oil and 150 trillion cubic meters of gas. Both the KRG and Baghdad each export roughly 565,000 barrels of oil a day to the Mediterranean port of Ceyhan in Turkey – not far off the volume of OPEC member Qatar. Major clients are Israel and Germany, with Turkey only in sixth place. The KRG’s fields are largely operated by foreigners such as Genel and Gulf Keystone, in addition to Gazprom, Rosneft and Chevron.

There’s no Route B for Kurdish energy exports. When the Baghdad oil route was seized by ISIS in 2014, the Peshmerga captured several oil fields around Kirkuk and the KRG built its own alternative pipeline to the Turkish border.

What makes matters even more complex is that for the past three years Baghdad has had no choice but to use the new Kurdish route for its exports to Turkey, even as it brands Kurdish oil exports illegal. Now Baghdad is vowing to immediately rebuild the federal pipeline, totally bypassing Kurdistan.

So the KRG, to survive, depends on the oil-to-Turkey connection. In the wake of the referendum, their situation is beyond critical. Ankara has been adamant: don’t even think about independence. Erdogan has all but spelled out that he could shut down the pipeline at any minute. Meanwhile, Deputy Prime Minister Bekir Bozdag has announced the closure of Turkish airspace to the KRG, stressed Iraqi territorial integrity, qualified the referendum as illegal, and endorsed Baghdad’s offensive on Kirkuk. Tehran has also given its backing to Baghdad imposing a full land and air blockade on the KRG.

The non-Battle of Kirkuk featured only a few clashes between the ISF and the Peshmerga. A key reason is the internal Kurdish split. The Peshmerga actually accused a faction of the PUK of “plotting” against the Kurds and of committing “a great and historic treason.”

Barzani – technically the commander-in-chief of all Kurdish armed forces – did see the writing on the wall. He ordered the Peshmerga not to attack the ISF, only to react, “using every power,” according to his assistant Hemin Hawrami.

Prime Minister al-Abadi took no time to appoint an Arab politician, the current leader of the Arabic Council in Kirkuk Rakan Saeed, to replace Kurdish Najmaldin Karim as the governor of the province. Al-Abadi had previously instructed the ISF to “cooperate with the Peshmerga and avoid confrontations, and to protect all civilians.”

The going really gets tough when it comes to the role of the Hashd al-Shaabi, the People Mobilization Units (PMUs) that fight side by side with the ISF.

Karim Nuri, a commander with the Hashd al-Shaabi, told Kurdish news agency Rudaw that anyone fighting against the ISF is “the same as ISIS.”

Enter the nefarious Zalmay Khalilzad, a.k.a. “Bush’s Afghan” and former US Ambassador to Iraq, furiously tweeting that Iran’s “IRGC-backed militia led by terrorist Mahdi Mohandis has begun an assault on Kirkuk.” Mohandis is the deputy head of Hashd al-Shaabi.

Khalilzad is spinning a narrative that will be digested as fact all across the Beltway – that the PMUs are “using Abrams tanks provided by the US to the Iraqi armed forces against the Peshmerga.” He even asked Trump, rhetorically: “Shouldn’t we disable these tanks to prevent their use by Quds force proxies?”

Shwan Shamerani, commander of the Peshmerga’s second brigade in Kirkuk, actually doubled down, stating that “the Iraqi army and the Hashd al-Shaabi are not the only state that are attacking us. We have intelligence with 100 percent accuracy that there are also the Iranian army and the Revolutionary Guards among them.”

A Hashd al-Shaabi operative clarified that the PMUs especially want to protect the Shi’ite majority areas of Kirkuk. Half of the Turkmen who also claim Kirkuk are Shi’ites; Turkmen are currently about 10% of a total population of 1.2 million.

He stressed that the Hashd al-Shaabi take their orders from Baghdad – from Hadi al-Amiri, the head of the Badr organization, which is loosely linked with the IRGC, and from Mohandis, the commander of the PMUs, but not from Iran. “We had hoped that we would get support from neighboring countries but this didn’t happen,” he said. “We get all our equipment from the central government.”

The key, irrefutable fact on the ground is that the PMUs work side by side with the ISF. And there’s nothing the Pentagon can do about it.
The impotence of the US$1 trillion US Warfare State is reflected in Pentagon spokeswoman Laura Seal’s wording: despite the KRG’s “unfortunate decision to pursue a unilateral referendum… we continue to support a unified Iraq.”

And that leads us to the definitive answer to why the Battle of Kirkuk was essentially bloodless, as Asia Times confirmed with Baghdad diplomats. It has to do with Washington’s supreme bête noire: Tehran.

Qassem Soleimani, the head of the IRGC’s elite Quds Force, is considered a “terrorist” all across the Beltway. But it was this “terrorist” who brokered a complex deal between the PUK, the PMUs and Baghdad to make the Kirkuk takeover as smooth as possible. Way beyond the fight against ISIS, Soleimani has been a master negotiator with Sunnis, Shi’ites and Kurds alike – no distinctions. No wonder Barzani had to retreat. No one wanted an Iraqi civil war.

What we have just witnessed is the near breakout of warfare between two alleged US “clients” in Southwest Asia. And yet civil war – along with the balkanization of Iraq – was prevented. The facts on the ground speak for themselves.

Also appeared on CounterPunch on October 20, 2017