Posted by Editor on Tuesday, September 3, 2019 · Leave a Comment 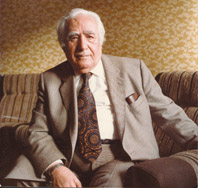 Cigerxwin (“The bleeding heart”), is a pseudonym for Sheikmous Hasan. He came from north Kurdistan and was mainly known as a poet. He made a great impact on Kurdish poetry through his work. He produced books on Kurdish history, literary history , Kurdish grammar and also a dictionary. He was born in 1901 or 1903 in the Kurdish village of Hesar close to city the of Mardin within the then Ottoman Empire. In 1925 he fled to Syria, in 1958 to Iraq and in 1970s to Lebanon. In 1979 he again fled from oppression to Sweden aged 76. Here he was able to publish several collections of poetry that no publisher in the Middle East had wanted to publish, due to the infected Kurdish question. Cigerxwin has often been called the father of Kurdish literature. He died in Sweden in 1984.

who am I, you ask ?
The Kurd of Kurdistan,
a lively volcano,
fire and dynamite
in the face of enemy.
When furious,
I shake the mountains,
the sparks of my anger
are death to my foes.
Who am I ?

I am in the east,
forts and castles
towns and hamlets,
rouks and boulders,
What irony, what a shameful day !
A slave I am now for blood suckers
Yet I saved the Middle East
from the Romans and the crusaders.
Who am I ?

Ask the Near East,
Ask the Middle East,
villages and towns,
plains and deserts.
They were once all mine
when by war and knowledge
I defeated rivals
to become crowned over an empire
stretching to the borders of India.
Who am I ?

I am the proud Kurd,
the enemies’ enemy,
the friend of peace-loving ones.
I am of noble race,
not wild as they claim.
My mighty ancestors
were free people.
Like them I want to be free
and that is why I fight
for the enemy won’t leave in peace
and I don’t want to be forever oppressed.
Who am I ?

I shall free my land
from the tyrants;
from the corrupt Shah and Mollas,
from the Turkish juntas so we may live free
like other nations,
so my gardens and meadows
are mine again;
So I can join the struggle
for the good of mankind.
Who am I ?

It was I who defeated
Richard the Lionheart
My own blood I shed
to defend these regions.
A thorn I was in my enemies’ side;
in my shadow lived the Arabs, Turks and Persian;
many a king held my horse’s head.
Yes I am the warrior,
I am Saladin,
the King of Egypt, Syria and Israel.
Who am I ?

I am Ardeshir,
I am Noshi Rawan.
In the acient days
rivals feared my caesars
regretted my animosity.
I knew no fright;
in love with adventure;
from India to Greece
they paid me tribute.
Who am I ?

Yes, I am the Kurd,
the Kurd of Kurdistan
who is poor and oppressed today.
My castles and forts
are now demolished;
my name and my fame’
swindled by my assailants,
those who set germs into my body
to paralize my existence
making a nameless soul of me;
a nation with no friends.
Who am I?

I am the one who despite it all
remains the unyielding Kurd;
still formidable to the enemy.
The smell of dynamite is again in my nostrils
and in my heart the strong desire to erupt.
I am the fighting valiant of mountains
who is not in love with death
but for the sake of life and freedom
he sacrifices himself
so that the land of his ancestors,
the invincible Medes;
his beloved Kurdistan , may become unchained.
Who am I?

One of my ancestors was the Blacksmith Kawa
who slayed Dahak, the notorious tyrant
to break off chains from Kurdish shoulders
and save many heads from the sword and death.
The day his vicious reign ended
was called NOWROZ, the New Day.
When Nowroz comes winter departs
taking with it the dark harsh times
to make place for light and warmth.
This is the time, as Zoroaster says,
the evil spirit Ahriman is defeated
at the hand of Ormazd, the god of wisdom and light.
Who am I?

I am the maker of Nowroz;
again I shall become my own master,
the ruler of my land
so I may enjoy the fruits of my orchards,
relish the sacred wines of my vineyards
and put an end to a dark era
by seeking salvation in knowledge and science;
I shall make another new day
and breathe the pure air of the liberty.
Who am I?

I am Kordokh, the good old Khaldew;
I am Mitan; Nayri and Sobar;
the son of Lo Lo; Kardok and Kodi;
I am the Mede, the Gosh, Hori and Gudi;
I am the Kurmanc, Kelhor; Lor and Gor;
yes, I have always been and remain the Kurd.
Despite centuries of suppression
in a country by force divided.
Who am I?

I am the son of Lor, Kelhor and Kurmanc
who have lost crown and reign
to become powerless,
betrayed in the name of religion
to carry rosaries in their hands
duped by the rulers,
deprived of might and wealth,
fighting each other, divided and torn
while my oppressed Kurdistan,
my wretched Kurdistan
remains prosessed.
Who am I?

The son of the Kurdish nation
awaken from deep sleep,
marching forward,
proud as a lion
wanting the whole world to know;
I shall struggle and continue the path to freedom;
I shall learn from great men,
Like Marx and Lenin.
I make a vow to my ancestors,
to Salar, Shergo and Deysem,
that this of mine will remain vigorous, unyielding, stronger than death.
Let it be known;
I announce with no fear;
Liberty is my goal;
I shall advance in this path.
Who am I ?

I am not blood thirsty;
no, I adore peace.
Noble were my ancestors;
sincere are my leaders,
We don’t ask for war but demand equality
but our enemies are the ones who betray and lie.
Friendship I seek and offer my hands
to all friendly nations.
Long live Kurdistan;
death to the oppressor!!!
Translation: Shahin Baker.