Lebanon: Past weighs heavy on present 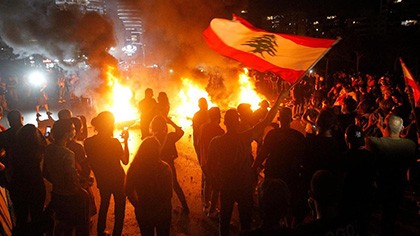 Less than a week after the massive port explosion that cost more than 200 lives, the entire Lebanese government resigned. Of course, long before that, serious students of the Middle East thought of Lebanon as a failed state. The grossly unfair constitution, the inbuilt sectarianism, the bungled response to Covid-19 and the subsequent economic crisis triggered protests across the country … against hunger, unemployment, inflation, endemic corruption.

Having said that, if every government that presided over a botched or inconsistent response to the current crisis resigned, we would be without a government in the UK, the United Sates, Spain, Italy, Iran, India, Brazil … What distinguishes Lebanon is the fact that it is an artificial state, created by dominant post-World War I colonial powers – Britain, but mostly France – for the purpose of serving their imperial interests. As Robert Fisk wrote a few days ago,

Emmanuel Macron’s immediate promise amid yesterday’s fires – that France will stand “always” by the crippled nation which it created in imperial hubris a hundred years ago – was one of the more piquant ironies of the last few hours.1

As was also the case in relation to the pandemic, the Lebanese government had been warned by its own security officials that “2,750 tonnes of ammonium nitrate stored in Beirut’s port posed a security risk and could destroy the capital if it exploded”.2

The fertiliser explosion, plus years of sheer incompetent governance, have left none of the constitutionally recognised and embedded groups and leaders untainted. All have taken part in one or another intersectional government – Maronite Christians, Sunnis, Shias, Druze. Each looks after its own in what is a system of corruption. Things work, to the extent that they do, through clientelism. While ever-decreasing crumbs are delivered downwards, the designated elites and intermediaries grow ever richer, wealth being squirreled away to London, Paris, Nicosia and New York.

When it comes to the explosion itself, the facts seem reasonably clear. Not that that has stopped a crop of conspiracy theories springing up. The Saudi-sponsored sections of the Middle East media, pro-Israeli Zionists and Iranian supporters of Donald Trump are all desperately trying to blame Hezbollah, claiming, for instance, that the Shia group had been hiding military weapons amongst the towering sacks of fertiliser.

While [Hezbollah secretary general Hassan] Nasrallah is our greatest enemy to the north, he is Lebanon’s biggest problem from within. We see the tragedy that happened in Lebanon … Just think about what would happen if that were repeated with Iranian weapons in Lebanese villages … We are dealing with enemies who are operating and storing weapons in a civilian environment. If we have no choice but to fight, it might have difficult implications.

For their part, Iranian supporters of Hezbollah claim that there are photos showing a US or an Israeli plane or planes flying over the port seconds before the explosion …

Ironically, when the now departed government took office at the beginning of the year, it was heralded by the mainstream western media as an example of a ‘modern’ Middle Eastern administration – full of skilled technocrats with a suitable quota of women occupying ministerial posts.

The Sunni prime minister – a career academic at the American University of Beirut – was supported by the Shia groups, Amal and Hezbollah. Members of the Sunni coalition, the Free Patriotic Movement, held one third of the cabinet positions. The rest were divided between the (Christian Maronite) Marada movement, an Armenian and a Druze, as well as Amal and Hezbollah ministers. Some of the enthusiasm for the new government was based on the fact that almost all members of the new cabinet had a high-level degree or PhD. Apparently this was going to save Lebanon.

However, anyone with an iota of intelligence knew that the problem with previous governments had nothing to do with the educational level of ministers. It had everything to do with the way the state of Lebanon came into existence, and with it the inevitable foreign meddling in the daily running of the country – from the French colonial and neo-colonial era through to Bashar al Assad’s interventions, then Israeli invasion and subsequent warmongering – not forgetting the current competition between Saudi Arabia and Iran’s Islamic Republic. None of those states come out well and the angry crowds on the streets of Beirut leave no doubt about how they see the situation.

The day before the government’s resignation protestors gathered in huge numbers, blocking access to parliament. The ministry of foreign affairs was occupied. People blamed the political elite from all across the sectarian divide – not just for the August 4 explosion, but also for the disastrous handling of Covid-19. Sections of the pro-Saudi media tried to imply the demonstrations were only about Hezbollah, but that was never the case. Cut-out photos of president Michel Aoun, parliament speaker Nabih Berri and prime minister Hassan Diab, amongst many others, were used in mock hangings. The slogan was: “Resign or die!”

For four centuries Lebanon was part of the Ottoman empire, but in 1916 the two great colonial powers, Britain and France, entered into a secret diplomatic deal that has fuelled territorial and sectarian conflicts ever since. Basically, it was agreed to carve up the Middle East. Straight lines – sometimes referred to as ‘lines in the sand’ – were drawn on the map between the Mediterranean sea and the borders of Persia (itself already divided into Russian and British spheres of influence). That is how France ended up ruling modern-day Syria and Lebanon. Britain got what is now Iraq, Jordan and Israel/Palestine.

Although Lebanon was declared a republic in 1926, the constitution of the new state was written by the French colonial authorities. Independence was formally granted in November 1943. While the constitution declared Arabic to be the country’s official language, it also provided a role for French. It stipulated that the distribution of ministerial posts should be based on religion and locked in a Christian parliamentary majority – regardless of changing demographics. Now there is a clear Muslim majority, and in 1990, after the long and bitter civil war, the constitution was changed to provide for equal Christian and Muslim representation.

Of course, Lebanon is host to almost half a million Palestinians and 1.5 million refugees from Syria, who have no political representation. An important factor, when you consider that the population of the country totals just over six million. Most of the Palestinians are actually the descendants of those who fled across the border in the late 1940s.

Inevitably a constitution with a built-in sectarian divide leads to endemic conflicts. Civil war first broke out in 1975. A year later, Hafez al Assad (father of the current Syrian president) sent in troops to ‘restore peace’. One of their tasks was to control Palestinians – angered by the killing of thousands of refugees, following the siege of the Tel al‑Zaatar camp by Christian militias. Many Middle Eastern states approved of this ‘Arab deterrent force’.

In June 1982, after an attempt on the life of the Israeli ambassador in Britain, for which a Palestinian group was blamed, Israel launched a full-scale invasion. Israeli troops occupied west Beirut. After the pro‑Israeli president, Bachir Gemayel, was assassinated, Falangist militias besieged and then massacred thousands of Palestinians in the Sabra and Shatila camps.

In 1983 a suicide attack on the US embassy in Beirut killed 63 people and another bombing, at the headquarters of the ‘peacekeeping forces’ killed 241 US and 58 French troops. To this day the US blames Iran’s Islamic Republic for this humiliation. Weary of heavy casualties, the United States withdrew its forces in 1984, and Israel followed suit in 1985 – except for the southern Lebanese strip, which it declared a “security zone”.

The years 1988-90 saw two governments: the Maronite commander-in-chief, Michel Aoun, ruled in east Beirut, while prime minister Selim el-Hoss headed a mainly Muslim administration in west Beirut. Under the terms of the 1990 peace deal, the national assembly ordered the dissolution of all militias. Despite that, neither Hezbollah nor the Israeli-backed South Lebanon Army (SLA) complied. In 1996 Israel bombed Hezbollah bases in ‘Operation Grapes of Wrath’, when a UN base at Qana was also hit, killing over 100 displaced civilians.

However, when in 2000 Hezbollah defeated the pro-Israeli militia in the south, the SLA collapsed, and Hezbollah pressed home its advantage. Israeli troops were forced to withdraw from the occupied zone – the only time Israel has been decisively defeated in its entire existence.

In 2004 the United Nations called on Syria to withdraw from Lebanon, but Assad refused. Weeks of political deadlock ended with the departure of prime minister Rafik Hariri, who was killed a year later by a car bomb in Beirut. The year 2005 was marked by growing opposition to Syrian presence, with anti-Syrian rallies held across the country, and eventually Sunni prime minister Omar Karami’s cabinet was forced to resign. Syrian forces finally withdrew in April of that year.

The country has experienced relative peace since 2009 – although the political scene has remained turbulent and often dangerous, even by Middle Eastern standards. Political assassinations remain part of daily life and any visitor to Beirut will see armed militias in most districts, protecting their own sectarian turf.

In October 2019 Lebanon witnessed an eruption of protests. Faced with an economic crisis and under pressure from lenders, the government tried to reduce its $86 billion foreign debt to avert a currency crisis. The result: mass pauperisation.

In Beirut, protestors targeted super-rich areas, where luxury apartments and shops replaced the rubble of civil war. Government ministers and members of parliament were denounced as “thieves”. There were calls for “revolution” and the “overthrow of the system”. Of course, it is true that a lot of the blame lies with the way the pro-Saudi government was running the economy. However Hezbollah’s participation in this, and in subsequent governments – with their neoliberal economic policies, including the privatisation of community housing, as well as social and welfare services – are rarely questioned by what passes for the anti-imperialist left. Apparently one should not criticise Hezbollah because it is the declared enemy of the US and Israel.

Of course, Hezbollah has never claimed to be a socialist or an egalitarian force. Nonetheless, its extensive social welfare programme in the south of Lebanon has seen it grow and maintain mass support. Its schooling, healthcare and community services are not only on offer to loyal supporters. However, in Beirut and other major cities, its middle class followers espouse a neoliberal economic agenda. They do not even pretend to be religiously pure. At Hezbollah election rallies in the capital you see groups of women without headscarves and wearing low-cut, sleeveless T-shirts – the kind of clothing that can get you arrested in southern Lebanon. They happily wave the organisation’s yellow flags.

While the economic crisis fuelled protests in 2019, the port explosion has propelled masses of people into a frenzy. There have been desperate calls for foreign intervention, including from some of the former left. Incredibly, more than 50,000 Lebanese have signed a petition pleading for Lebanon to return to being a French mandate.

In response to such nonsense, let me emphasise this. There can be no internal solutions to the sectarian conflict in Lebanon. The same goes for the Israel/Palestine question. Each entity amounts to a narrow Ulster-like slither, carved out from the collapsed Ottoman empire and its Syrian province by Anglo-French imperialism. Lebanon as a Christian state and Israel as a Jewish state are not only inherently undemocratic. They are historically unviable.