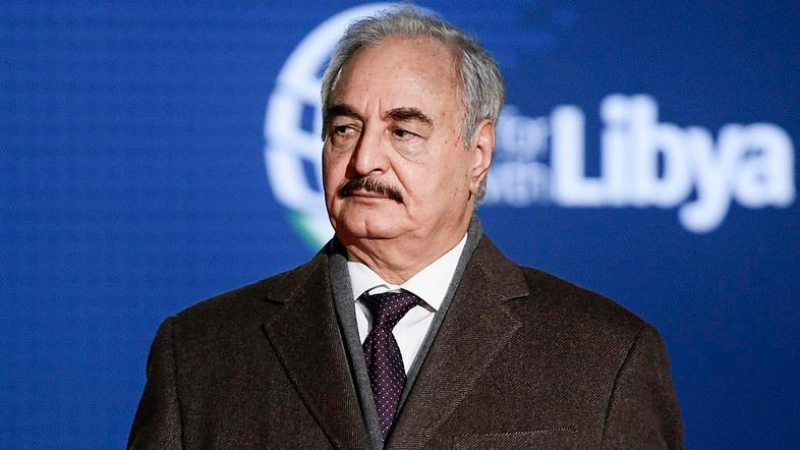 The West and the Gulf Arabs have condemned Libya to the strongman.

You can well imagine the tension when Libya’s beleaguered Prime Minister Fayez al-Serraj met with the UN envoy Ghassan Salamé in his office in Tripoli on Monday morning. Not far away, in the south of Libya’s capital, the troops of the Libyan National Army led by General Khalifa Haftar had made rapid advances. They had taken the shell of Tripoli International Airport and had made a dash toward the road that links Libya to Tunisia. Haftar’s troops, well-armed and well-disciplined, had moved northward toward the Ain-Zara neighborhood. On Monday, Haftar’s air force bombed the only working airport in Tripoli – at Mitiga. The United Nations wanted to let al-Serraj know that it would not abandon him.

It’s hard to follow the ins and outs of Libyan politics, particularly given the fragmentation of the country after the NATO war in 2011. NATO hit Libya very hard, destroying what institutions remained.

As soon as the bombs started falling, General Khalifa Haftar departed for Benghazi (in Libya’s east) from his home in Virginia, just a 10-minute drive from CIA headquarters.

Haftar had been a senior general in the army of Muammar al-Gaddafi, and it was Haftar who had led the charge into Chad during that ill-fated war in 1987. Haftar defected to the United States, dashed out of Libya with his family and arrived in Virginia. The United States government essentially gave Haftar exile status, keeping him in cold storage for when he might be useful. But Haftar was in for a surprise.

The U.S. government led by Barack Obama thought that it controlled the situation in North Africa, when in fact it was flat-footed. Obama’s team felt that it could continue to support Egypt’s Hosni Mubarak even after Egypt’s military had decided to do away with him. In Libya, they felt that their man – Haftar – would be able to take the reins and seize Libya for the United States. But when Haftar arrived in Benghazi, he found that the Gulf Arabs – notably the Qataris – had already chosen the next leader of Libya, their banker Mahmoud Jibril. The United States and France bombed Libya to a crisp and Qatar won the initial prize, with Jibril as the head of government.

Libya fell into the worst of the rivalries of the Gulf Arabs. Saudi Arabia and the United Arab Emirates – with their close friend Egypt – had a grand falling out with Qatar – and its close friend Turkey – in 2014. Egypt and the UAE, as well as Saudi Arabia, had already decided that Haftar would be their man against Qatar’s Jibril. The Egyptian and Emirati bombers gave Haftar air support as they continued his brutal war in Benghazi and then as he attempted a failed coup in Libya in 2014. Haftar appeared to the Saudis and the Emiratis as the Libyan version of Egypt’s president Abdel Fattah el-Sisi. Haftar saw that el-Sisi was given a long leash, not only by his Gulf Arab allies but also by the West, which said nothing about the human rights violations inside Egypt. If el-Sisi can get away with it, Haftar surmised, so can he.

NATO destroyed Libya, but the UN was forced to pick up the pieces. This has become such a familiar sight. The West bombs a country, then withdraws; the UN, often with peacekeepers from the Global South, has to do triage.

A few days ago, UN Secretary-General Antonio Guterres came to Libya. He had hoped to broker a peace. Nothing seemed possible. “I leave Libya with a heavy heart and deeply concerned,” Guterres said. Guterres had been accompanied in his trips to see al-Serraj, the UN-backed prime minister, and Haftar. Guterres, whose UN has sent in a succession of five envoys since 2011, was perhaps aware that the work the UN did to unite the country’s factions that led to the government of al-Serraj was soon to unravel.

Al-Serraj, who comes from a wealthy and well-connected family, was always the UN’s prime minister. It has long been said in Libya that al-Serraj’s government is more interested in “international” (meaning Western) support than in Libyan support. Basic needs of the population have not been met, with power and water being a challenge and security non-existent in parts of the country. Al-Serraj’s government has been bolstered by certain militias that came into their own during the NATO war. Disagreements over the role of political Islam tore apart Libya’s institutions, with a House of Representatives in the eastern city of Tobruk refusing to recognize the government in Tripoli.

Haftar and al-Serraj had several meetings. The United States, the Gulf Arabs, France, Egypt and Russia have been eager to see progress between the two sides. The prime minister and the general met in Cairo (February 2017), in Abu Dhabi (April–May 2017) and in Paris (May 2018). At each meeting, they substantially agreed on basic principles – a peaceful solution, for instance – but did not agree on specifics. Officials in al-Serraj’s government said that they hoped to bring in Haftar as the head of the army of the Government of National Accord. But Haftar had other dreams. He saw that there was unrest in Tripoli about the inefficiency and inconsiderateness of the government. There was even a protest against Salamé. Haftar is the kind of man who has great ambition but no real agenda. He will take all of Libya, but he has not said what he would do with it.

Oil and the West

Europe wants Libyan oil. Its sources of energy have been picked off one by one by the West’s conflicts. It first lost access to Iranian energy because of the United States and Israeli driven sanctions regime (2006 to the present). NATO’s war on Libya set back the possibility for Libyan oil – the easiest to refine kind – to travel across the Mediterranean Sea (2011). It then lost access to the Russian energy, including the crucial Russian–German Nord Stream gas pipeline, after the conflict in Ukraine (2014). There’s no doubt that Europe is eager for Libyan oil. It has said so quite directly.

Haftar’s troops seized the southern oil fields in Libya (including the largest, Sharara, directly south of Tripoli) and are in control of most of the oil installations on the coastline. He is already – substantially – in charge of the oil. If Haftar is able to take the oil terminals in Zawiya, then he controls all the oil and its exits.

There is a good reason why the United States withdrew its forces from Libya as Haftar approached Tripoli. It does not want to be forced to defend the UN government against a man who will soon be anointed leader of the country. France has very close links with Haftar. Its defense minister Jean-Yves Le Drian has been a regular guest in Libya, meeting both al-Serraj and Haftar. Sources near Haftar say that Le Drian and the general are very comfortable with each other.

If Haftar takes Libya, the Saudis and the Emiratis would have their tentacles across most of North Africa (Egypt and Libya). Last year, Saudi Crown Prince Mohammed bin Salman toured the rest of North Africa, including Algeria. He received the cold shoulder from both the people and the leaders. Things will change for him if his close proxies are in charge of half of the north.

The West and the Gulf Arabs have condemned Libya to the strongman.

Europe has another worry: the refugees. There is a sense that Haftar will bring stability to the country and stop the movement of people northward. European values are fairly clear: they want oil to travel northward, not people. Haftar, at the cost of the Libyans themselves, will make that happen.