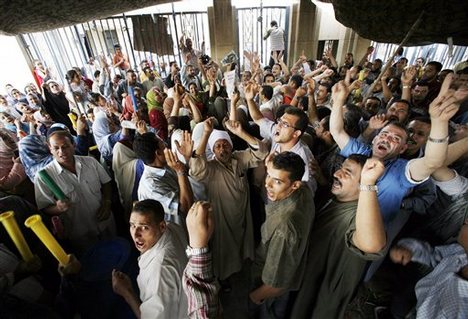 Over 2,000 workers from the state-owned Misr Spinning and Weaving Company in Mahalla called off their partial strike on Wednesday. Five of the strike leaders, all women, are currently facing a disciplinary hearing and face potential suspension or sacking.

The workers have threatened to resume the strike on Sunday if their demands are not met.

Five factories, making up one fifth of the productive capacity of Egypt’s largest textile mill, initiated the strike on Tuesday to demand the payment of overdue bonuses and augmented food allowances in light of rising inflation and he government’s recent austerity program.

One worker, who wished to remain anonymous, told Mada Masr, “While none of our demands have yet been met, it was decided that we would call off our strike action until Sunday in order to give company administrators the opportunity to begin fulfilling our demands.”

They added that negotiations with administrative officials began on Wednesday, coinciding with the disciplinary hearings of five strike leaders.

The worker expressed concerns about the women facing disciplinary action, pointing to previous work stoppages which saw labor leaders relocated, “simply because they spoke out for our rights, and because they led others in exercising their right to strike.”

The workers have been demanding that their monthly LE220 bonuses be calculated as part of their basic wages, rather than a separate payment, the payment of an overdue 10 percent “social bonus,” and the augmentation of their daily food allowance from LE7 to LE10. They have also called for the re-operation of several stalled factories, and the removal of their union committee which they claim aligns itself with management policies.

During Wednesday’s meeting company representatives argued that the 10 percent bonus is still being debated by Parliament, and that the company could not immediately meet the strikers’ demands due to a lack of liquidity and recent financial losses.

Once a mainstay of Egypt’s textile industry, the Misr Spinning and Weaving Company in Mahalla has seen a decline over the past decade, and currently faces debts of several hundred million pounds, although the exact figure has not been disclosed.

The striking workers are considering a comprehensive strike starting on Sunday if administrators do not adequately attempt to meet their demands, or if they take punitive action against the five women facing disciplinary hearings.

On Thursday, the New York-based Human Rights Watch issued a statement calling on the government and Egyptian-based companies to recognize workers’ right to strike, and to drop all criminal charges that have recently been leveled against dozens of laborers across the country.

While Article 15 of the Egyptian Constitution recognizes workers’ right to strike, security forces have repeatedly been deployed in recent months to put down labor protests and work stoppages.