Map for a future Palestine, Israel: Trump’s ‘deal of the century’ 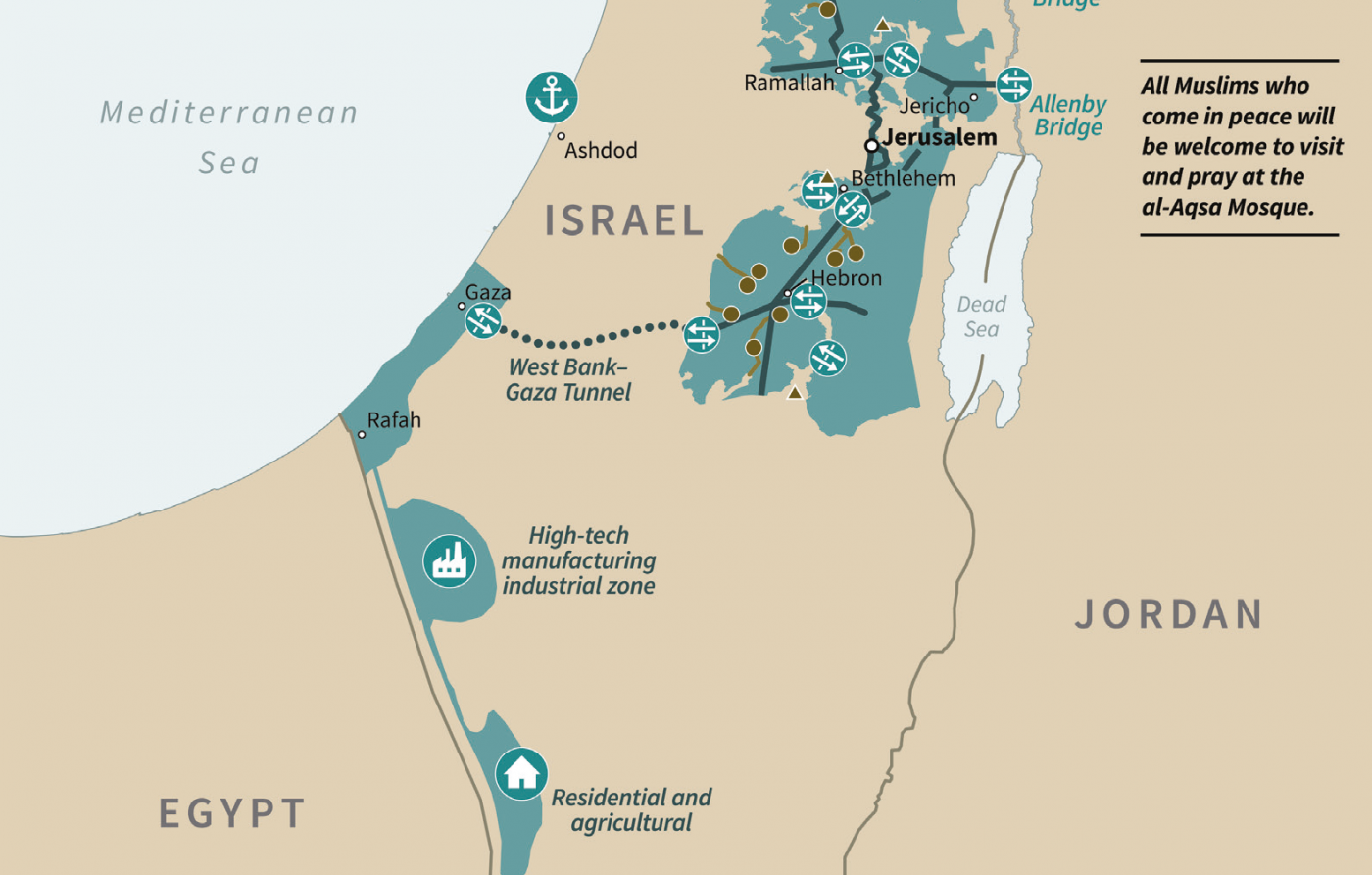 US President Donald Trump on Tuesday unveiled new details of his long-touted plan to address the Israel-Palestine conflict.

The 181-page document contained conceptual maps showing how Israel and a future Palestinian state could look if Palestinians agreed to sign up to the plan, which was endorsed at the White House by Israel Prime Minister Benjamin Netanyahu.

This is how the territories of Israel and Palestine would look under Trump’s plan:

The maps shows a series of Palestinian cantons pockmarked with illegal Israeli settlements marked as “enclave communities”. One lists 15 such communities, but stresses that the list is “not all inclusive”.

Commentators already have noted that the map goes nowhere near showing the archipelago effect in reality, and shows Palestinian territory to be much more coherent than it would be on the ground.

Connecting the various communities are segregated Palestinian and Israeli roads, much like today. These Palestinian roads, however, are labelled “major”.

Some Palestinian areas are linked by bridges and tunnels, the most prominent being one between the West Bank and Gaza Strip.

South of Gaza, in the Negev desert, are a “high-tech manufactory industrial” area and a “residential and agricultural” zone. It is not clear if this is intended to be sovereign Israel or part of a future Palestinian state.

All routes between Palestinian communities are thin corridors, and easily severed.

Four triangles mark “strategic sites” – presumably Israeli military bases. They all appear to be either within the Palestinian cantons or adjacent.

Beside the Mediterranean cities of Haifa and Ashdod appear large anchor icons. Port access for the Palestinians, apparently.

Jerusalem, marked by a star on the map of Israel but just a dot on the Palestinian one, will “remain undivided west of the security barrier”.

The status quo over the Al-Aqsa compound will be maintained, a map says. But “all Muslims who come in peace will be welcome to visit and pray at the al-Aqsa Mosque”.

“Boundary representation is not necessarily authoritative,” both maps warn. And they’re correct, because up to the north the Lebanese border is marked only by a dotted 1949 armistice line.

“Terms and conditions” apply, the Palestinain map reminds us.

In more detail, the first map is entitled “The state of Israel”.

The second map is entitled “A future State of Palestine”.

This article is available in French on Middle East Eye French edition.

The actual geographical achipalago of the proposed Palestinian entity