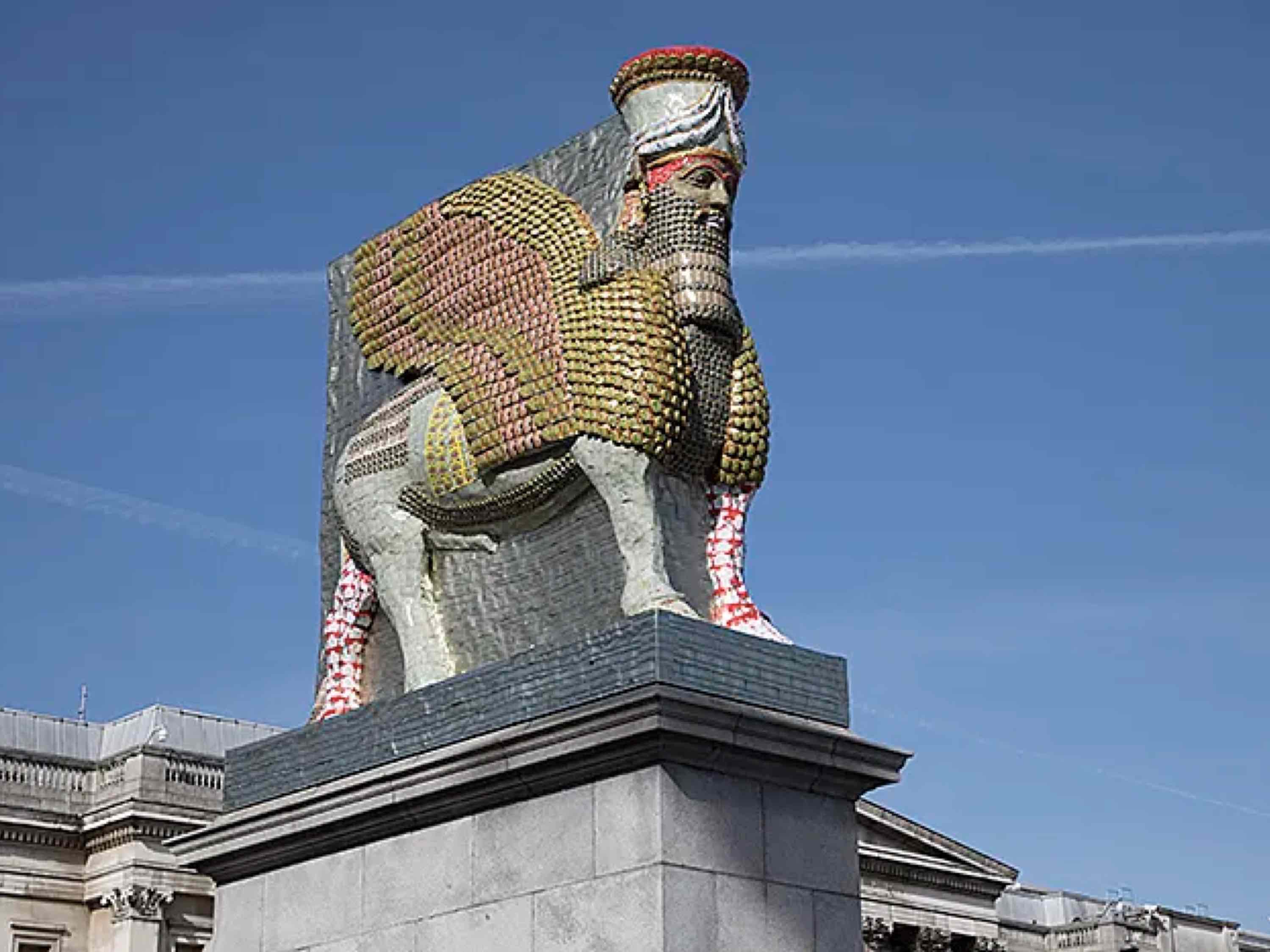 Whitechapel Gallery, London: The Beatles play a presidential funeral while Nimrud’s Palace is rebuilt with sardine cans in this angry, thought-provoking journey though time.

Michael Rakowitz’s fascinating Whitechapel show is filled with surprises. It is also an exhausting experience. An inflatable grey building greets you, corralled behind a timber ramp and elevated walkway. A simplified, pneumatic vinyl housing block, it puffs itself up, then flags wheezily and slumps like a drunk to one side. Then up it comes again, undefeated. Designed as a modernist estate in 1954, the Pruitt-Igoe development in St Louis was initially a segregated area, and although that didn’t last, the estate was predominantly occupied by African Americans and left to decay. So bad did it get that the whole thing was dynamited in 1972 and the rubble used as landfill for luxury homes in the suburbs. Up it comes, down it goes.

Over the way is another utopian project with a better provenance: Vladimir Tatlin’s unrealised 1919-20 Monument to the Third International, intended to be taller than the Eiffel Tower and erected in what is now St Petersburg. This model has been cobbled together from reclaimed timber and cables and gas pipes of The Block, a planned neighbourhood of affordable housing for the Indigenous Australian community in Sydney. This too was allowed to deteriorate and was demolished, and Rakowitz collaborated with the community to build this version of Tatlin’s Monument, which has had a secondary function as a broadcast tower for an Indigenous Australian radio station. The Russian Revolution and Dreamtime, Rakowitz’s analysis of the social conditions of The Block and the inappropriateness of the original concept, is all laid out in a series of drawings and handwritten commentaries alongside the tower.

Rakowitz’s work feeds on backstories and explications. You have to stay with it and negotiate the complexities, or you might be left wondering why there is a whole gallery devoted to the breakup of the Beatles and John Lennon’s murder, the death of Egyptian president Nasser, and an overlay of Liverpool’s Cavern Quarter with a map of Jerusalem. Footage of the four fractious mop-tops intercut with Nasser’s funeral and a great live performance of Get Back by a Palestinian band, Sabreen, from a Jerusalem rooftop in 2010, all need unpacking: it isn’t all a foot-tapping Beatles nostalgia trip. Stick around, you might learn something – and find yourself moved, and angered, and overwhelmed by the sorrows and destruction of the world.

Rakowitz’s remade version of the winged god that stood at the Nergal Gate of Nineveh from 700 BC until its destruction by Isis in 2015 is still standing on Trafalgar Square’s fourth plinth. This beautiful polychrome reconstruction, made entirely from snipped-up and riveted-together Iraqi date-syrup cans (more than 10,000 of them), is part of a larger ongoing project, The Invisible Enemy Should Not Exist, which itself forms part of the Whitechapel show.

Here, the decorative friezes in the ninth century BC Northwest Palace of Nimrud, once the banqueting hall where Assyrian sovereign Ashurnasirpal II received guests, have been reconstructed using commercial packaging: Moroccan tinned sardines in tomato sauce, Maggi halal chicken soup. The branded packaging of Al-Kbous Tea, Middle Eastern chewing gum and many other products sourced from Assyrian grocery shops in Chicago are used to create fields of colour, flowers and figures. They cross walls and turn corners, recreating the layout of the original rooms.

There are whole areas missing, corresponding not only with what Isis destroyed but to the earlier losses and pillaging of the site by adventurer western archaeologists, who removed – or looted – entire sections of the reliefs, which then found their way into European museums.

More than 15,000 artefacts were looted from the National Museum of Iraq in Baghdad after the city fell to US troops in 2003, and Rakowitz has, since 2007, been trying to reconstruct them all. He calls these objects “ghosts or apparitions”. A selection stand on a big trestle table, all remade using glued newspaper and cardboard, the ubiquitous date cans and wrappers. All are meticulously labelled, and appended with remarks and statements. It is sad and funny, horribly entertaining, and leaves one impressed by the ingenuity with which these objects – pots, vases, figures, helmets, daggers, reliefs, musical instruments, stone cylinder seals, inscribed clay tablets (the first evidence of writing) and much besides – have been bricolaged and refashioned.

Made for 2012’s edition of the great five-yearly art exhibition Documenta, What Dust Will Rise conflates the Nazi burnings of sacred Jewish books and the accidental bombing of the Fridericianum Library in Kassel by the RAF in 1941, the destruction of the Bamiyan Buddhas by the Taliban and the revitalised stone-carving tradition of the local Hazari craftsmen in Afghanistan. The Hazari have carved stone books from the travertine limestone of the destroyed Buddhas, which sit among Rakowitz’s commentaries, handwritten on the display furniture, which unravel, contextualise, recomplicate the exhibits. Everything is filtered through history and circumstance, and Rakowitz’s unlikely alignments of times and places, the redoubling of the echoes he finds, and the stories objects can tell. There is no end to them, and they are all connected.

Featured image: The Lamassu on the fourth plinth in Trafalgar Square, London. Lamassu, one of the deity-statues, used to guard the entrance to the city of Nineveh, on the outskirts of the modern city of Mosul in northern Iraq. Rakowitz made the copy out of date-syrup cans and packaging material. The original monument was destroyed four years ago by Isis -Daesh. It was created more than 2,500 years ago.

For an excellent article on Michael Rakowitz, his life and art see Financial Times