Morocco’s Movements Take to the Streets for Water, Labor Reforms, and Human Rights 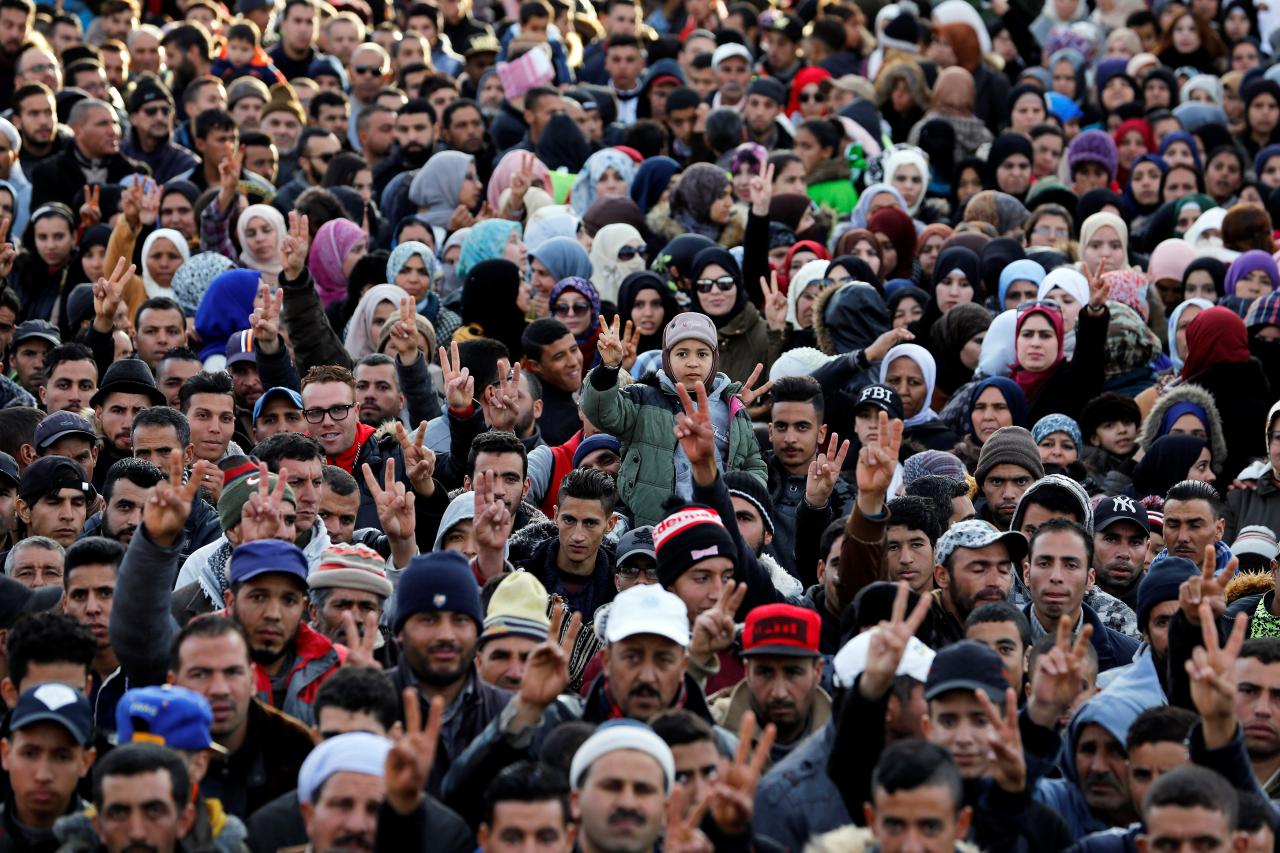 Last December, the brothers Houcine and Jedouane Dioui died while working in a coal mine in Jerada, a small city in northeastern Morocco. The young men were caught in a flood in a clandestine, unsafe mine where they were forced to labor to make ends meet.

The deaths of the Dioui brothers proved to be a spark that ignited a protest movement in this impoverished region of the country. Protests filled in the streets in the wake of the tragedy and continued for some three months. Protesters gathered to demand an “economic alternative” in a region where unemployment is high and young people need to work in dangerous mines to survive.

In response to activists’ demands, the government attempted to launch a dialogue between political authorities and representatives of the movement in Jerada.

But just as the movement’s demands were resonating throughout the country, with people marching to nearby towns, Jerada activists Amine Mkallech and Mustapha Dainane were arrested.

While demonstrators clamored for their release, on March 13 of this year, the Ministry of the Interior responded by forbidding “unauthorized protests.” The following day, dozens of people were injured in clashes with police forces and numerous protesters were arrested. According to the Moroccan Association of Human Rights (AMDH), at least sixty-two people have been detained in connection with the Jerada protest movement.

Since then, the movement has had a new focus: the release of what local activists call “political detainees,” in this case, Jerada protesters arrested by police. On April 10, the first verdicts on the detainees were made public. The activists Dianane and Mkallech were sentenced respectively to ten and eighteen months in jail, officially in connection with a car accident that happened two days before their arrest. On April 19, seven people were tried for, among other charges, “harming and assaulting public officers” and participating in an “armed gathering,” according to Jawad Tlemsani, head of the Oujda bureau of the AMDH.

Participants in the Jerada movement continued protesting despite the government’s deployment of police forces, but the gatherings had a lower intensity, with spontaneous sit-ins in a few areas. The mobilization has greatly weakened since the momentous early days. Now, most activists devote their time and energy to attending the trials taking place in Oujda, 60 kilometers away from Jerada. According to Tlemsani, three sit-ins have taken place so far outside the courtroom, drawing the families of the detainees and a few activists.

“There is a considerable setback in human rights and freedom of expression in the country right now. People have stopped protesting in Jerada. There is a heavy police presence and people are afraid. Everyday, there are reports of new arrests,” said Tlemsani.

The depletion of social movement energy as a result of government crackdowns is an outcome that is all too common in Morocco. However, the general dynamic that drives the movements will last, according to human rights activist Abdellah Lefnatsa. He explained the protests will continue as long as the government doesn’t address the demands of the movement and more broadly, the unequal distribution of wealth. “The new element here is that the repression hasn’t put an end to the movements throughout the country,” he said.

Khadija Ryadi, former AMDH president and 2013 recipient of the UN Prize in the Field of Human Rights, shared a similar point of view: “The repression can stop this movement but it will not prevent other movements.”

Morocco has witnessed an unprecedented level of government repression since May of last year, when a movement in the Rif region of the country rose up to demand higher levels of employment, access to healthcare and education, and an end to corruption. Hundreds have been arrested in this struggle, called the Hirak (the movement), while human rights organizations have also drawn attention to several cases of state torture of detainees.

According to Lefnatsa, the scope of this government crackdown, with over four hundred still currently behind bars, is unique in Morocco’s recent history. In the last two decades, Moroccan authorities have never initiated a similar wave of arrests in such a short period of time, he explained. Although the repression is heavier now, this period of crackdowns dates back to 2012, after the birth of the February 20th Movement, a pro-democracy struggle that arose in the wake of similar uprisings in Tunisia and Egypt during that time.

“The regime made concessions in 2011 but it considers it has been cheated. What it has given – a new constitution, anticipated elections, a rise in the salaries of public servants – has only lasted a few months. And as early as 2012, the repression started,” Lefnatsa said.

According to the AMDH, at least 300 people have been jailed since 2011 in connection with the February 20th Movement. But while most human rights organizations have focused on the Hirak,a more recent number of arrests has been disregarded. Youssef Raissouni, from the central bureau of AMDH, has drawn attention to another 124 people arrested for “political motives,” including students, human rights defenders, and trade unionists.

Meanwhile, the struggle in Jerada points to the deeper economic and political crises in that region of the country. The coal mines have long been the main source of employment in this city. Though they were officially shut off at the end of the 1990s, due to a lack of profit, people kept on working there despite the safety risks.

The protests shed a new light on the illicit exploitation permits several local officials – dignitaries as well as elected officials – have benefited from, enabling them to take advantage of a cheap workforce. Local activists have adamantly demanded an investigation into the officials’ responsibility in the shady coal trade in which desperate locals are forced to suffer.

In an effort to calm things down, the Minister of Energy, Mining and Sustainable Development Aziz Rebbah, as well as the Minister of Agriculture Aziz Akhannouch, went to Jerada as early as January. A few weeks later, on February 10, the head of Morocco’s government Saadeddine El Othmani, met with local elected officials and business representatives in Oujda, the biggest city in the region. He announced the withdrawal of the exploitation permits, the start of agricultural projects in the region, and financial help for the housing and health coverage of former miners in need.

But the government’s promises failed to convince the protesters.

“These movements are caused by the deterioration of social and economic conditions,” said the human rights leader Ryadi. “People don’t accept this situation anymore and the only way they can make themselves heard is to take it to the streets.”

Before the movement in Jerada, the Hirak, and the February 20 Movement, other uprisings emerged throughout the country, Ryadi explained. In Sefrou, people spoke up against high prices of basic goods and services, and in Sidi Ifni, they denounced unemployment. Most faced serious government repression.

Most of these struggles were not “continuous” like those in Jerada and in the Rif, where they went on for months and involved all society – women, the elderly, sometimes children – despite the crackdown.

In recent months, several other towns have been shaken by occasional protests. They have no structural links to the larger Moroccan movements, but share most of the same slogans and demands for employment, development, an end to corruption, and more government support. In Outat El Haj in the region of Fes-Boulmane, in Zagora in the south, and in Errachidia in the east of the country, people have expressed similar economic and social demands.

The recent movement in Zagora was part of a longer-term struggle for access to water and health infrastructures dating back to the early 2000s. Last summer in that region, during a period of high temperature and drought, people rose up for access to water as it had become scarce in many people’s home. Several sit-ins and marches were organized for water up until last November, when the arrest of thirty-one protesters – as well as a drop in temperatures and the return of (undrinkable) tap water in people’s homes – weakened the movement. Yet, Brahim Rizkou of the AMDH bureau in Zagora explained that if the situation doesn’t improve and the weather conditions are difficult this summer, the inhabitants of Zagora will take it to the streets once more.

Morocco’s movements are on the march. The coming weeks and months will likely be critical as pressure builds to release political prisoners, protests continue, and temperatures rise.

IlhemRachidi is a freelance reporter based in Morocco. Rachidi has written extensively on protest movements and human rights issues, publishing articles in the French newspaper Mediapart (where she has worked as a correspondent for four years), Rue89, Al Monitor, and The Christian Science Monitor.

See these related Toward Freedom reports on Morocco by IlhemRachidi:

“People Are Not Afraid Anymore:” The Legacy and Impact of Morocco’s February 20th People’s Movement

The Press and the Palace: Moroccan Journalists Denounce Government Crackdown on Media

The Hirak: A Moroccan People’s Movement Demands Change From the Streets