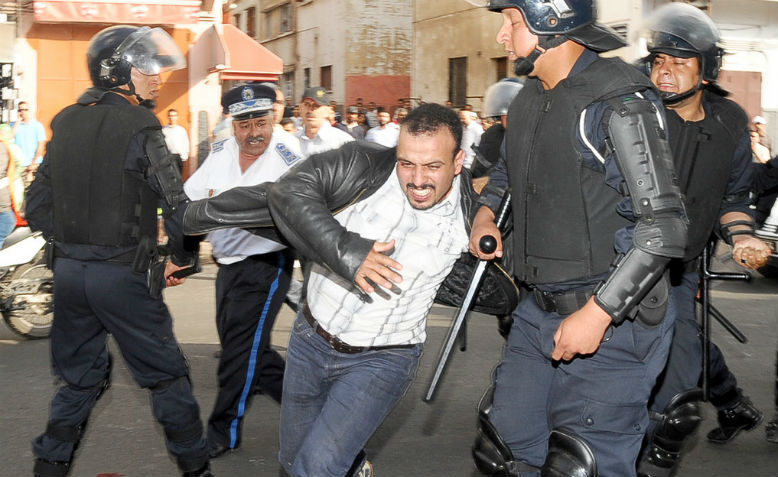 On Wednesday 26 October, the well-known Moroccan historian and human rights activist Maâti Monjib and five of his colleagues were hauled into the High Court at Rabat to answer charges of “attacks on national security” and “receiving foreign funds.” They are facing up to five years in prison for their activities as investigative journalists, human rights advocates and members of the “February 20th Movement” –  the Moroccan version of “Arab Spring” of 2011.

Two days later, anti-government demonstrations spread across Morocco after social media spread the story of Mousine Fikri, a fishmonger crushed to death inside a garbage truck as he tried to block the destruction of a truckload of his fish confiscated by police. The February 20  Movement, long assumed dormant, sprang back to life and took the lead in organizing the protests, which spread to forty cities.

These two events – the Monjib trial and the demonstrations sweeping the country — are hardly unrelated. Monjib and his co-defendants, journalists, media activists, and fighters for human rights, were already a thorn in the side of the regime even before the 2011 rising. Since then they and their colleagues have courageously struggled for media freedom while building the on-line infrastructure of information and interaction that makes possible real-time on-the-ground mobilizations like those taking place this week. Their efforts have not gone unrewarded, despite years of government harassment including base defamation campaigns in official media, bogus arrests on morals charges and the current treason trial. As today’s headlines illustrate, social media remain a potent tool in the hands of the oppressed, and the authoritarian regime of King Mohammed VI had “good” reasons to persecute media activists like Monjib and his friends.