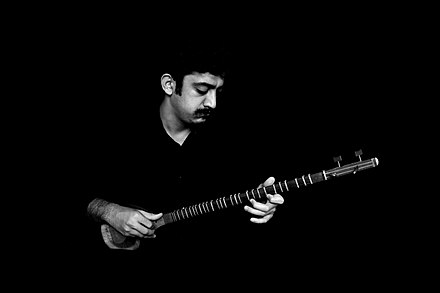 One of the songs was recorded during an air strike, parts of another by a fleeing refugee aboard a boat.

The man behind the album is himself technically on bail from Iran’s notorious Evin prison – even the photographer, who created the cover art, has spent three years behind bars for his creative work.

Middle Eastern, which was released this year by Sony Music Entertainment, is a unique project that brought together nearly 100 musicians from across 12 countries, including, Yemen, Syria, Iraq and the Palestinian territories.

It is the brainchild of Mehdi Rajabian, 30, an Iranian musician who has twice been jailed for his musical activities and is currently serving a suspended three-year jail sentence.

He hopes the album will promote peace and unity in one of the world’s most troubled regions.

“The only point here is peace, comfort for the Middle East,” he tells The Independent from Iran.

“Right now, the only communication politicians understand is war, human-rights violations, and suppression. But we talk back to them with music. The only weaponry and power we possess is the language of music.”

Rajabian was first jailed in Iran in 2012 when he was just 17 years old, after starting an underground record label that looked to sign women artists.

In ultra-conservative Iran, female singers can face prison time on charges of immorality if they perform in public or sing solo.

For three months he was held in solitary confinement.

When he was released on bail, he continued his musical activities and so in 2015 was re-arrested and eventually sentenced to three years in jail together with his filmmaker brother Hossein, on charges of “insulting Islamic sanctities” and “illegal audio-visual activities”.

The brothers, who say they were tortured in jail, staged two hunger strikes. He says he lost 15kg before he was released.

“I could have died at any stage of the process.”

After Amnesty International and musicians across the world intervened, Rajabian was released on bail in late 2017, but still has a suspended prison sentence hanging over his head.

His music could land him behind bars once again in one of the world’s most terrifying prisons, but he is determined to push ahead with his project – which was first dreamed up in jail.

“War and human rights violations have always been a part of the Middle East,” he says.

“I feel like music is a language which has no borders, and so we can unite different countries together and scream a message of peace. This album was the result of that idea.”

He says albums like Middle Eastern are needed now more than ever because a crackdown on music and art in the wider region has become so extreme it can “no longer just be called censorship”.

“In Iran, artists are being physically eliminated.”

Through his work, and study of Middle Eastern music, Rajabian says he has met many musicians in the region and so brought those together who had experienced human rights violations, “bombardment, war and suppression”.

The album took a year to produce with the songs recorded in each of the artists’ countries, in order to reflect the musical traditions of each place, as well as the suffering the creators go through.

Among the contributors are Mohamed Saed from Egypt, a country now in the grips of a military dictatorship; Al Fares from war-ravaged Yemen, and Bassem Hawwar, a rebab player from Iraq.

Rajabian, who places the setar, a type of Iranian lute, features on the first track.

The photograph used as the cover was taken by award-winning Iranian photojournalist Reza Deghati, 66, who was arrested in his early 20s for activism and jailed for three years.

According to an interview with Al Jazeera, the image is of a hole in a damaged ceiling in a palace that belonged to Iraq’s brutal former leader Saddam Hussein.

“Through the songs you can feel what people of these 12 countries feel,” Rajabian continues.

“Although our musicians haven’t met each other in person, the music shows they share the same feelings. It shows the Middle East is exhausted by the same torment.”

Posted on the Independent May 2020