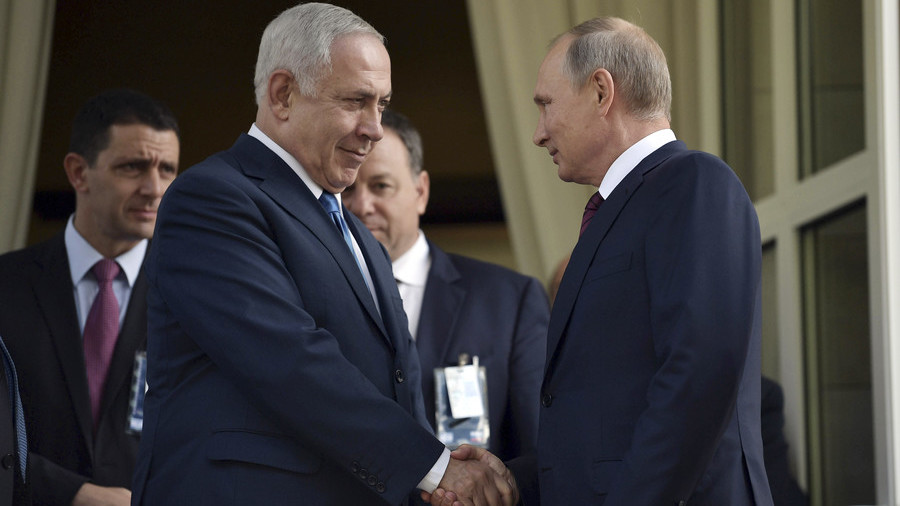 On July 11, Israeli Prime Minister Benjamin Netanyahu made his third visit to Russia this year to meet with President Vladimir Putin. The talks were dominated by the Syrian issue and the possibility of an Iranian departure from the Arab republic in exchange for Israel not interfering in the military operation in the south of Syria led by government forces. Although the topics on the agenda weren’t new, what made Netanyahu’s visit more important this time around was that it occurred just days before the US-Russia summit set for July 16 in Helsinki. Washington is allegedly seeking to raise the issue of Iran’s presence in Syria and has Israel’s full support for this move.

In the run-up to the Netanyahu visit, Russia outlined two topics for his talks with Putin: a Middle East settlement and the situation in Syria. The former, however, ended up being more of a backgrounder. Moscow had earlier invited the Israeli prime minister to attend the final game of the FIFA World Cup on July 15, where Netanyahu could have found himself in the stadium together with Palestinian President Mahmoud Abbas. Yet Netanyahu, who is reluctant to meet with Abbas, opted for an earlier visit, while the Palestinian leader will come for the final as originally planned. Israel could have ignored the Russian invitation altogether, especially given the fact that Putin and Netanyahu saw each other only two months ago, on May 9. But the situation on the ground in Syria demanded a personal encounter.

“Every visit, every meeting of ours is an opportunity to work together to improve security and trust in the region and the world,” Netanyahu said in his opening remarks. “Of course, our focus is on developments in Syria, the presence of Iran. This is not new to you.”

Putin responded: “We are aware of your concerns. Let us discuss them in detail.”

Iran’s presence in Syria and its role in the Middle East in general is a favorite topic of Israeli politicians. In this respect, there wasn’t much new in what Netanyahu would tell Putin, perhaps except for the compromise the Israelis had earlier agreed on with the Americans: The Iranians would have to leave Syria in exchange for President Bashar al-Assad staying in power. If the leaks in the US media are to be believed, this is what President Donald Trump was going to discuss with Putin in Helsinki.

Netanyahu is apparently looking to act as a middleman between Putin and Trump. In principle, it’s understandable — what satisfies Israel in Syria will satisfy Washington. Russia’s position on this matter is known: Not only should there not be Iranians in Syria, but the Americans shouldn’t be there as well. Netanyahu confirmed that the US presence in Syria was also discussed at his meeting with Putin.

“This issue is always being raised and I’ll leave it for the conversation between Trump and Putin themselves,” Netanyahu told Israeli journalists before his departure for Moscow. “The Israeli position is to hear the American position.” Netanyahu believes the American position boils down to the idea that the United States will only leave Syria when Iran does so. Thus the nature of the Russian-Israeli agreement on Iran — if there actually is one — remains a mystery.

The Israeli daily Haaretz was the first to release a version of the Putin-Netanyahu talks. Referencing its official source, Haaretz said, “Putin conditioned Iranian pullout from the border with Israel by Israel not preventing reinforcement of the Assad regime.” This rather sensational version was soon replaced by a more neutral one: “Russia is working to remove Iranian forces from Israel’s northern border.” In parallel, “Israel is avoiding destabilizing Assad’s regime in Syria.” While the latter appeared on the Hebrew site, the English edition had an important specification: Israel was only doing so “as [Assad] retakes Syria’s south.”

“We won’t take action against the Assad regime, and you get the Iranians out,” the anonymous official quoted Netanyahu as telling Putin during their meeting.

Another Israeli source privy to the talks, who spoke with Al-Monitor on condition of anonymity, refused to say who suggested certain conditions and just noted that “it’s a mutual understanding coming from both sides,” adding that what was said about the negotiations is not far from what Haaretz first reported.

“It’s Israel’s interest to keep Iran out of Syria. And Russia isn’t too happy to have Iran in Syria as well,” the official said.

When questioned by Al-Monitor on whether Russia could really do something to make Iran depart Syria, the official replied: “Don’t underestimate Russia. We have faith and knowledge that Russia has leverage to do a lot.”

For Moscow, however, Iran’s exit is not something to be achieved in the immediate prospect. In the context of the Syrian conflict it will happen sooner or later. Moscow can thus promise anything with a clear conscience. Not today, however, but when it is a good time for Tehran.

As for the departure of pro-Iranian militias, this fits into the trilateral Russia-US-Jordan agreement on the southwestern de-escalation zone. Russian diplomats have emphasized on multiple occasions that there should be no “non-Syrian forces” in the area. Based on observers’ accounts, pro-Iranian militias do not — at least officially — take part in the Syrian army offensive in the south. To a large degree, this is to the credit of the Russian military, but it also occurred, to some degree, over concerns of new Israeli strikes. Yet some pro-Iranian militias have just probably put on Syrian army uniforms. Israeli media insist Russia promised to keep Iran within 100 kilometers (62 miles) from the Israeli border and has already been partially delivering on this commitment. Russian diplomatic sources clarified to the Kommersant newspaper that, at first, the initial arrangement implied 80 kilometers, yet Israelis have been gradually raising demands on the full departure of the Iranians from Syria.

Israeli journalists who accompanied Netanyahu in Moscow said the agreement on the 80-kilometer line has nonetheless been observed. As for those who apparently “changed uniforms to remain,” Netanyahu confirmed that Israel reserves the right to deliver a strike as soon as it identifies such elements. He also stressed that Israel “has no problem with the Assad regime,” but the main problems include the presence in Syria of fighters from Hezbollah, the Islamic State and Iran.

Whether Moscow managed to persuade Israel to stay away from the Syrian army offensive near Israel’s northern border remains to be seen. But as the latest incident with the drone showed, many seek to provoke Israel in a bid to upset its relations with Russia. The effect, however, will likely be the opposite.

When talking to journalists, Netanyahu sought to emphasize that Israel has no contradictions with Russia and that they are working together on Syria. He felt it was important to stress that Russia still gives Israel the needed leeway on Syrian territory. It was especially important in light of the drone that was downed by the Israeli army just as Netanyahu was on his way to Russia. The Israelis shot the drone down as soon as they learned it wasn’t Russian. Shortly after the talks in the Kremlin, Israel followed up with its own strikes on Syria, which Russia didn’t prevent.

Moscow allows Israel to behave the way it wants to in Syria under two conditions: If the Israelis strike Syrian positions only in retaliation to Syria’s own offenses, or when Israelis attack non-Syrian forces. In all other instances Russia responds with severe criticism, summoning the Israeli ambassador to the Foreign Ministry, something that also doesn’t really prevent Israelis from doing as they please. At the official level, however, no one would confirm this pattern. On the contrary, in all public statements Russian politicians stress the importance and strength of ties with Iran and its indispensable role in the Syrian settlement.

It certainly is no coincidence, in this respect, that Ali Akbar Velayati, a top aide to Iran’s supreme leader, came to Moscow exactly on the same day as Netanyahu.

Marianna Belenkaya writes on the Middle East for Russian daily Kommersant and is an Arab studies scholar with almost 20 years of experience covering the Middle East region. She served in the Russian Foreign Ministry’s press pool from 2000 to 2007 as a RIA Novosti political commentator and was later the first editor of the RT-Arabic Service (Rusiya Al-Yaum) website until 2013. She has written for the Nezavisimaya Gazeta, the Russian Profile Magazine and Al-Hayat and is now a regular contributor to the Carnegie Moscow Center. On Twitter: @lavmir