‘No’ – it’s not over yet! The AKP government in crisis following rigged referendum. 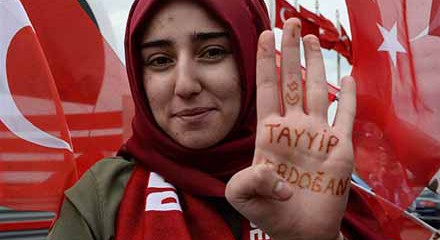 The shambles that followed the April 16 referendum to amend the constitution confirmed the widely held expectations of the left: president Recep Tayyip Erdogan and his Justice and Development Party (AKP) failed to gain sufficient support for the amendments giving the president huge powers, and have resorted to wide-scale voting fraud.

The body chosen to provide the result with a thin veil of legitimacy was the Supreme Electoral Council, which oversees all electoral procedures. It consists of seven principal and four alternate judges elected from among members of Supreme Court of Appeals and Supreme Court of Administrative Law. Each ballot box was supposed to be overseen by nominees from four political parties working under a “man of good repute”.

The votes are tallied after the voting has closed in the presence of representatives of the political parties, and both valid and invalid votes are recorded. Nowadays, almost all party representatives take a photo of these returns with their mobile phones and send it to their party headquarters, where special teams tally the returned votes and follow up the procedures to ensure that the correct results are entered into the central computers.

This elaborate and cumbersome system is a nightmare in general elections, where many parties and candidates are on the ballot. Many aspects of tallying, returns and computer results are disputed and it sometimes takes weeks or even months to settle all of them. But it was claimed the system would work much more efficiently in a simple ‘yes’ or ‘no’ referendum.

However, with political power concentrated in the hands of the few, and with the blissful ignorance – or cooperation – of the state, the system is open to all kinds of abuse. Electoral fraud has always been a problem, but since the 1946 general election, widespread electoral fraud has not been attempted. In that year, despite huge support the opposition was brutally suppressed and allocated only a handful of seats in parliament. There was no judicial oversight and, while voting was open, counting was done in secret.

And now Erdogan, armed with emergency powers, has overseen a similar scenario. This time, however, judicial oversight was turned into a mockery by the eight justices appointed by the high courts in the aftermath of the botched military intervention of July 15 2016. Under the pretext of getting rid of secret members of the Islamist Gülen movement said to be entrenched in state institutions, oversight was severely hampered.

Today the independence and impartiality of the judiciary is practically non-existent in Turkey, and this is reflected in the Supreme Electoral Council, which made highly controversial decisions on the hoof. Despite the presence of a clear rule to the contrary in the electoral law, the council decided during counting that unstamped ballot papers were to be deemed valid. There was no need to count them and record them separately. This meant that virtually anything stuffed into the ballot box was deemed a valid vote and in fact more than 1,200 ballot boxes recorded only ‘yes’ votes without a single exception. Around 7,000 ballot boxes contained votes which equalled or even exceeded the number of registered voters and more than 60% of them recorded a ‘yes’.

While the electoral roll is supposed to be signed by the person casting their vote, in many instances it carried an identical signature for all voters! In some centres unstamped ballot papers were stamped retrospectively during counting and objections from the electoral observers were ignored.

As you might expect, such a massive fraud has created a huge backlash. Amid the hullaballoo it became apparent that the Supreme Electoral Council had used the correct procedures for ballots cast abroad, and declared many unstamped ballots to be invalid in countries where the ‘no’ vote was high. These shameless double standards also resulted in the gross violation of electoral law in Kurdistan. The social media is full of photos and videos depicting armed men – mostly the infamous ‘village protectors’ – brandishing their weapons outside balloting centres and claiming wipe-out ‘yes’ votes from among ‘their own’ electoral districts.

There are also many instances of “erroneous data entry” in regard to the inputting of the returns into the central computer system. Sometimes the figures for ‘no’ and ‘yes’ votes were transposed!

Pots and pans in unison

The main opposition People’s Republican Party (CHP) stated that it did not accept the results as valid, and that the extent of the fraud and subsequent cover-up was so widespread that recounting was virtually ruled out. CHP representatives lodged objections at more than 600 balloting centres and the party demanded that the results be declared null and void. Thousands of citizens have been attempting to lodge individual objections and there have been long queues outside provincial electoral council offices.

In several cities there have been large protest marches – welcomed by the banging of pots and pans from balconies or windows as they passed. This new movement could grow rapidly, provided the different sections of the opposition can act unitedly. During the campaign the left supported the slogan “#No” and now the new slogan on the streets is “#No – it’s not over yet!”

The final ‘verified’ outcome of the referendum will be declared in two to three weeks, but it will not be easy to get the population to accept it. Provided the parliamentary opposition is prepared to go all the way, there are quite important avenues open to it to overturn the result, but if it fails to do so the popular opposition will certainly attempt to force the state to rescind the referendum. The coming days will see a combination of legal battles and mass protests.

Meanwhile, more than 290 Kurdish prisoners are on hunger strike. The initial group has now reached its 60th day, which means that Wernicke-Korsakoff syndrome is likely to set in, leaving permanent damage to the nervous system. However, the authorities are refusing to allow them vitamin B supplements.

In addition, 13 Kurdish MPs, together with dozens of writers, authors and journalists, are still in detention. And virtually the first thing the government did after the referendum was to propose a three-month extension of its brutal emergency rule – the docile parliament rubber-stamped it before going into recess.

But the AKP government is shell-shocked. Despite the coalition formed with the racist Nationalist Movement Party (MHP), it is apparent that it cannot win a democratic election. So in the run-up to the 2019 mandatory election it will try to soldier on, looking for opportunities to win back popular support.

The AKP’s nationalist-Islamist rhetoric has forced it into a corner – it can no longer hope for support from the European Union. The threat to bring back the death penalty was intended to draw in support from the most backward masses, but it has also resulted in further isolation in the international arena. The only friends Erdogan still has are in the reactionary regimes of the Gulf.

This situation opens up new possibilities for the popular opposition in Turkey. Will we be able to use it to advance our cause, or will it end in despair? Only time – and struggle – will tell.