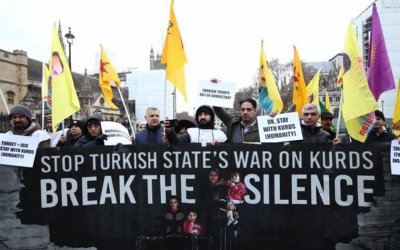 The Alliance of Middle Eastern and North African Socialists condemn Turkeys invasion of Northeastern Syria and its deadly assault on the Kurds.

Last week, after U.S. president Trump announced  the withdrawal of US troops from Northeastern Syria on October 9th,  Turkey began the bombing of its Syrian border regions and cities.  The authoritarian and reactionary Ankara government launched another military operation in northeastern Syria.

Northeastern Syria has been  controlled by the Syrian Democratic Forces (SDF), a military alliance of Kurdish, Arab and Assyrian fighters, dominated by the Kurdish forces of the People’s Protection Units (YPG), the military branch of the Kurdish Movement of the Democratic Union Party (known by the Kurdish acronym PYD).  Ankara has  labelled it  a “terrorist” organization because of its links with the Kurdistan Workers’ Party (PKK) of Turkey.

More than 100,000 civilians have already fled the areas bombed and threatened by the Turkish invasion.   200,000 more are  threatened with displacement.

The Turkish army’s offensive is conducted in cooperation with Syrian fighters of the so-called Syrian National Army (SNA), a coalition of reactionary and  Islamic fundamentalist groups financed and led by the Turkish government. The SNA  has already committed numerous violations of human rights, particularly in the Afrin region, currently occupied by the Turkish army.

This military operation is Turkey’s third invasion of Syria since 2016: The first, in August 2016 was titled “Shield of the Euphrates”; the second, in January 2018 was  called “Olive Branch”.  It led to the occupation of the Afrin region in March of the same year, and resulted in the forced displacement of more than 150,000 people, most of them Kurds, with many human rights violations still ongoing.

This Turkish military aggression is a continuation of the Ankara government’s war against Kurdish liberation movements and their representatives in Turkey, including the Democratic People’s Party (known as the HDP), and in neighboring countries, especially Syria and Iraq.

Another objective of the Turkish government in Syria is to forcibly transfer Syrian refugees from Turkey to the areas east of the Euphrates. Since the summer of 2019, Turkey’s government has accelerated campaigns of forced expulsions of Syrian refugees towards Syria. Thousands of Syrian refugees in Turkey have been subjected to mass deportations or forcibly returned to Syrian territories. Turkish  authorities and media agencies controlled by Ankara have also blamed Syrian refugees as the cause of  the socioeconomic and political problems in the country.

A few days ago, Turkish President Recep Tayyip Erdogan  threatened to “send” millions of Syrian refugees from Turkey to Europe in response to European criticism of his military offensive in Syria. Once again, Ankara instrumentalizes Syrian refugees as a political commodity in its relations with the European Union which is also guilty of maintaining  cruel, racist and deadly policies toward refugees.  The European union has closed borders in the face of people desperately fleeing for their lives. The European Union is therefore complicit in the Turkish assault.

Turkey’s aims are to establish a ‘safe zone’ of control and dominance along its border, where it can manage flows of internally displaced persons, forcibly repatriate refugees from Turkey, while also attack the PYD and its Syrian Democratic Forces.

At the same time, the Turkish invasion in northern Syria will most probably strengthen the resurgence of the various jihadist group, notably the so called “Islamic State”.  On October 11, five IS militants escaped from a Kurdish-run prison.  The extremist group claimed responsibility for a bomb that exploded in the city of Qamichli.

The Alliance of Middle Eastern and North African Socialists also condemn the role of the National Coalition of Syrian Revolution and Opposition Forces (known as the Etilaf), composed mostly of liberal and Islamic conservative and fundamentalist groups and personalities, and other Syrian reactionary groups, such as the Muslim Brotherhood, in their support for Turkish plans against the northeastern areas. They are still maintaining their chauvinist and racist policies and statements against the Kurds in Syria.

We express our solidarity with civilians in northeastern Syria and the rest of the country.  The people in the Northern Syrian province of Idlib are continuing  to suffer from indiscriminate bombardments by the Assad regime, the Russian as well as the U.S. governments.

We condemn Turkey’s new military operation and occupation  in northeastern Syria, carried out with the complicity of the Trump administration. We state our full support for the popular and progressive resistance, both civilian and armed, in the Northeast of Syria against the Turkish led military aggression.

We denounce the interventions and the presence of other foreign forces in Syria (Iran, Russia and the United States). All these international imperialist and regional powers are enemies of the liberation and emancipation of the peoples of the region.

The Alliance of Middle Eastern and North African Socialists reiterates its support for the right of self-determination of the Kurdish people in Syria and in other countries in the region.

We also reaffirm our opposition to the dictatorship of the Assad clan-led Syrian regime and  the Islamic fundamentalist movements, which are the two main pillars of the counter-revolution in Syria.

In the face of these enduring and destructive counter-revolutionary offensives, the best defensive is International solidarity. We stand with the communities in Syria and elsewhere in the world struggling for self-determination. The fight is universal!

The Alliance of Middle Eastern and North African Socialists