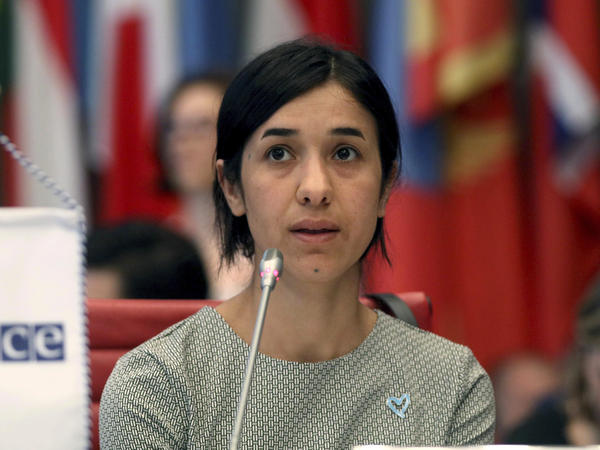 The young Yazidi woman, the victim of horrific crimes, has spoken out worldwide in her campaign to end sexual assault as a weapon of war.

Nadia Murad, one of two winners of the 2018 Nobel Peace Prize, was recognized for her globe-spanning campaign to end sexual violence as a weapon of war. A slender, frail young woman with gentle manners, Murad nevertheless became a forceful advocate for change, speaking to the United Nations and to governing bodies around the world.

In September 2017, as part of the Global Positive Forum, an international debate organized to enhance the positive initiatives that could make tomorrow a better place, she talked with National Geographic Editor in Chief Susan Goldberg, discussing her life under ISIS, the way she escaped, and her life afterwards. Now a United Nations Goodwill Ambassador, she shared her desire of going back to live in Iraq one day, and her dream to become a make-up artist.

As the interview began, a sound technician carefully clipped a microphone to her dress. She said she didn’t mind, but shuddered when being touched. Her gaze still carried the scars of an unspeakable horror. Still, she told Goldberg, “Justice can be achieved.”

Born in 1993 in a poor family in northern Iraq, Murad belongs to the Yazidi community, a religious minority linked to ancient Mesopotamian beliefs. Yazidis are ethnically Kurdish and have been subject to persecution over the years. They were among the 180,000 victims of a campaign of mass terror under Iraqi dictator Saddam Hussein.

In August 2014, ISIS jihadists attacked Sinjar, the largest Yazidi town, which was defended by Kurdish Peshmerga fighters. When the Peshmerga withdrew, the Yazidis were at the mercy of jihadists who told them they would have to convert to Islam to save their lives. During 12 days, a mullah tried in vain to convince them to convert; most Yazidis refused.

That is when the horror took place: the village inhabitants were summoned, and women, girls, and children were separated from men. Murad saw six of her brothers shot dead or decapitated. Two thousand Yazidi men were killed in the massacre.

Murad was abducted, taken to Mosul, and sexually enslaved. For months, she was beaten and raped daily by at least one guard. Eventually, Murad escaped took refuge in a neighboring house. There, an Iraqi Sunni family helped smuggle her to the Kurdistan border.

As a refugee living in a camp, Murad contacted a Yazidi refugee aid organization and was resettled in Germany. Her story attracted international law and human rights attorney Amal Clooney’s attention. Clooney has represented her ever since.

Two years later, Murad mixed seriousness and a lighter approach with a disarming strength as she spoke with Goldberg in her native Kurmanji, waiting patiently for her words to be translated to English to discuss her fight to bring justice to the Yazidi victims.