All or nothing: Erdoğan is going for bust in an attempt to cling onto power, 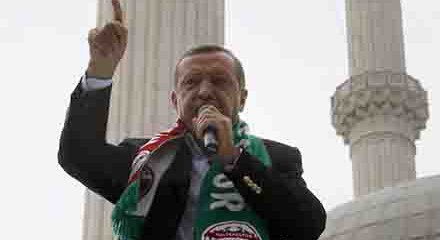 The winds of change sweeping the turbulent waters of Turkish politics have been pounding president Recep Tayyip Erdogan’s rocking and rolling caïque and driving it towards a shipwreck on the Kurdish mountains. Erdogan, the hapless coxswain, has been abandoned by many a supporter and is fully aware that his time is up, but is trying desperately to cling on, doing almost anything to avoid losing power.

Erdogan and his clique within AKP (Justice and Development Party) have enlisted every ally in the wider Islamist political circles in an attempt to curb the powers of the military and civilian bureaucracy over Turkey’s political life. Some liberals have been called upon to support the AKP in its quest to end military tutelage, and even a considerable section of the left has been accommodating to Erdogan’s undemocratic use of the security forces and judiciary.

Erdogan has managed to give the Islamist Gülen movement a new lease of life after years in the wilderness – the militants following founder Fethullah Gülen had suffered regular repression since the formation of the republic. But when the Gülenists were unleashed out of military and bureaucratic tutelage by the AKP, they quickly became the most important group within Islamist politics. This led to a rapid flourishing of their influence within the state security bureaucracy and judiciary, as well as in academia, the media and various municipalities, often through blatant nepotism. For a while they were presented as the role model for moderate Muslims to follow, in an age where ‘Islamist terrorism’ has become the number one enemy for many in the west.

Erdogan has been keenly aware of the allure of a ‘charismatic leader’ – he himself has been described in that way when it comes to the AKP. However, his ‘charisma’ is pale in comparison to that of Fethullah Gülen. Gülen, the Hodja Effendi (respected scholar), has taken over the experienced and well organised Nur (Divine Light) movement of the cold war era, attempting to transform it into a model suitable for the 21st century.

However, the movement’s tightly knit underground organisation was not well suited to open political work. It has no chance of winning over the mass of conservative and centrist Islamists to form an independent political party in a short space of time. Working under the cover provided by an established Islamist party, such as the AKP, seemed to be serving it better.

Erdogan was quick to realise that an eventual showdown with the Gülenists had to come and if he waited too long they would have a better chance of organising as an independent political party. In doing so they would take over at least a sizeable chunk of the AKP organisation, including some MPs. Such a split would be a disaster for Erdogan’s clique, and would surely deprive it of any viable opportunity to hold on to power.

The first veiled contest came in the shape of the famous corruption enquiries. Erdogan was obliged to sacrifice four of his ministers, who resigned after receiving guarantees of immunity from prosecution. Through that sacrifice he prevented the inquiry delving into the murky dealings of members of his own family.

The next episode in the power contest came when members of MIT national intelligence organisation were arrested on charges of aiding and abetting Islamist terrorists in Syria – they were caught red-handed with vehicles leased by the MIT and laden with illegal armaments. The Gülen movement wanted charges brought against the MIT director, but Erdogan resisted. This contest, while sufficient to tarnish Erdogan’s invincible image, failed to dislodge him. However, the writing was on the wall.