“Nothing to lose but their chains” 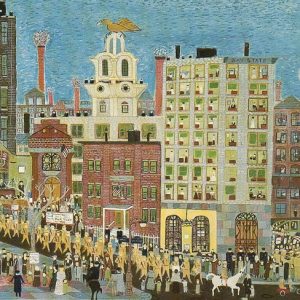 “The proletarians have nothing to lose but their chains. They have a world to win. Proletarians of All Countries, Unite!” These are the final three sentences of the Manifesto of the Communist Party, better known simply as the Communist Manifesto, published in 1848, and written the year before by Karl Marx and Frederick Engels.[1] Karl Marx and Frederick Engels, The Communist Manifesto (New York: Monthly Review Press, 1998). The words are a stirring rallying cry for working men and women to join in revolt against a social order that keeps them in chains, and then collectively build a better, freer world. The year 1848 was one of radical revolt throughout Europe, and the two revolutionaries were hopeful that capitalism would soon end and that upon its ashes a new society could be constructed.

The Rise of the Working Class

Let us examine the famous exhortation penned by Marx and Engels. First, proletarians are wage laborers, members of one of the two great social classes in the capitalist mode of production, the other class being the capitalists who employ them. Because workers own no or insufficient means of production, they cannot survive unless they sell their labor power to employers.

Marx believed, correctly, that as capitalism developed, wage labor would become the overwhelmingly dominant form of work. When capitalism was in its infancy in the sixteenth and seventeenth centuries, there were many other types of work arrangements because several modes of production coexisted: gathering and hunting, slavery, and various tributary systems such as feudalism. All but gatherers and hunters labored under coercive conditions, ruled by slave owners or feudal lords. Capitalism gradually undermined its feudal predecessor, breaking the direct, personal, and highly unequal relationship that existed between the lords who controlled the rural estates and the serfs who did the work. Land became private property, and serfs were forced from the land and into the wage labor force, either in the towns and cities or on sheep farms in the countryside. In both town and country, many former serfs were unemployed.

Although feudalism declined as capitalism grew, the same cannot be said for slavery.[2] It should be noted that feudal entities existed long into at least the nineteenth century—for example, large agricultural estates in Latin America—and these operated much like slavery, though probably not without the same drive to accumulate capital as slave plantations in the United States. As historian Gerald Horne has shown, there was a vibrant market for slaves throughout the Middle Ages in Europe, Eurasia, and the Arab world. And as Horne and others have shown, slavery and capitalism were intimately connected. From the beginning, the brutal treatment of slaves by profit-seeking slave owners was racialized to distinguish those who were slaves and typically of darker skin color from those who were “white.” Capitalism, then, and especially in the Americas and Europe, was a racialized capitalism.

Second, Marx and Engels say that “proletarians have nothing to lose but their chains. They have a world to win.” Here they imply that there is something special about these proletarians. Human beings have existed for at least one hundred thousand years, and perhaps, as some archaeologists now believe, much longer. This means that for probably 90 to 95 percent of our time on Earth, humans lived in relatively small bands, living by gathering nuts, berries, and plants, supplemented whenever possible by meat from hunted animals. The production of life’s necessities, as well as their distribution, was carried out in an egalitarian way, without permanent leaders and without the division of skilled tasks—like making tools or clothing—into unskilled details or subtasks. Remarkably, gatherers and hunters eventually populated most of the earth, an astonishing achievement for those who modernists call “primitive.”

Sharp changes in social organization arose once humans learned to cultivate plants. Over a long period of time, sedentary agriculture began to replace gathering and hunting, and along with it came the division of society into classes. Farming allowed the production of a surplus above basic needs, and this in turn made possible the existence of people who performed a social role but did no work. Feudal lords, emperors, priests, slave owners, and the like marked pre-capitalist class society, and these men (and some women) were able to use their positions of relative leisure and access to the surplus of production to exert power over the peasants, serfs, and slaves who performed the necessary tasks of producing output. Though there was great variability in class structures, the most basic commonality was the direct and personal relationship between exploiters and exploited.

Capitalism radically transformed class society. In place of personal, direct relationships between those who controlled production and those who did not, the new system’s relations of production were mediated by an impersonal market. Today, it is uncommon for workers to know the owners of the enterprises that employ them, not just personally but even to recognize their names, and it is rare for consumers to know who made the things they purchase. What is more, the extraction of the surplus value from the efforts of those who toil in factories, mines, mills, offices, and the multitude of other capitalist businesses is hidden by the market. It appears that we workers are paid a wage determined by the impersonal forces of supply and demand. It is not obvious that we are being exploited, that a surplus created by us has somehow become the property of the owner. We do not appear to be in the same position as a serf who could have been seen delivering part of the family’s crop to the lord. Much less are we similar to slaves, whose very bodies are owned by the masters. We are not tied by the threat of violence or even death to a lord or master but are free to work for anyone who will hire us. How is it, then, that we have nothing to lose but our chains?