One Year after the Lebanese Protests 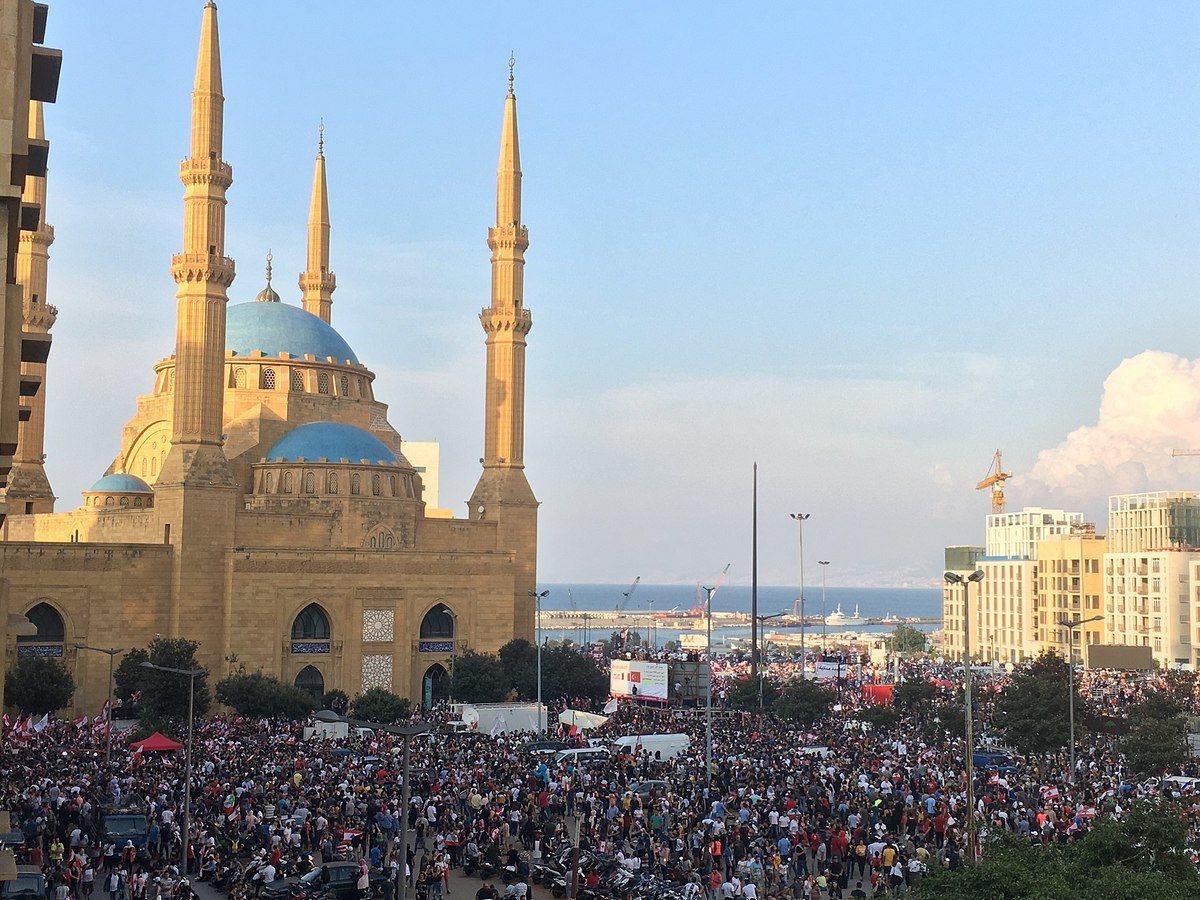 A year after Lebanese ex-Prime Minister Saad Hariri resigned amidst anti-government protests that sparked out of IMF austerity measures, the Lebanese government surprisingly is renewing talks to bring him back to the very position that, in his tenure, engendered years of popular frustration over corruption, privatization, and economic and political instability in the first place.

Hariri, inheriting the same economic regime initiated by his father, Rafic, who oversaw the deregulated real estate development transformation of Beirut through his company, Solidere, that essentially turned the city into his clan’s privatization venture, became the face of corruption and nepotism in Lebanon for very good reasons.

Just weeks before the October 17, 2019 demonstrations, Hariri came under fire following a New York Times story that unveiled his $16 million dollar gift to a bikini model in 2012. The laughable trope, which made its appearance at the demonstration on humorous protest signs, represented the absurdities and

Popular protests were tipped off October 17 in response to IMF-backed austerity measures proposed by a telecommunications minister to tax voice over applications widely used by Lebanese (which were dubbed the “Whatsapp Tax”).

Unsurprisingly, Hariri’s response to crippling austerity measures was…more austerity. His “72-hour plan,” unveiled in the wake of protests to address popular dissent was little more than a laughable repeat of the same policies that pushed people onto the streets in the first place. Hariri proposed further privatization of the electric sector (already a sectoral plan in his domain) and to push for more Western-donor packages (an $11 million pledge) that come with their predictable promise of more public-sector debt.

Of course, the sectarian superstructure that reigns supreme in Lebanon ensured that, just days after his resignation, he was not left without iconoclastic support. Future gang members, perhaps a product of decades of clientelism and sectarian territorialism that transformed otherwise unpopular, corrupt leaders as clan figures–or, as we say in Lebanon, zaims– gatekeeping privileges to communities deprived from an absent state.

This process of rehabilitation of Hariri’s image, that would lead to to his eventual comeback a year later, reveals an unfortunate reality about the nature of political power in Lebanon: the extent to which the material relations between citizen and state (or, lack thereof) in Lebanon has, for too long, been defined by the dependency on the deep-seeded superstructure of clientelism that requires mobilization much deeper than the hope given by the protests.

Mahdi Amel, also known as the “Arab Gramsci,” theorized decades ago that sectarianism in Lebanon is the mask of the “colonial mode of production” where Lebanese capitalism developed as a subordinate to economic imperialism.

Most importantly, the failure of the October 17 ‘hirak,’ lay in the inability for popular protests to change the material and institutional and economic dynamics of citizens to their state, independent of Lebanon’s longtime regime under international finance capital.

And how could there have been? The very institutional mobilization that would have been necessary to force a transfer of power from zaim to citizen had been compromised by privatization and erosion of state infrastructure for decades. Cooperatives, ministries, and municipal councils have been transformed from their intended role as mediators between citizens and workers and their government to mere mediums of finance capital from powerful actors to property. Today, farmers and workers cooperatives do not provide bargaining power or market assistance to farmers, but they act as little more than repositories for petrochemical sales and local sites of embezzlement and nepotism.

In any successful revolution, a successful transfer of power involves the necessary transfer of institutions towards the people, yet it is clear that in Lebanon, the opposite occurred: the “superstructures of society” have, in turn, weaponized their grip over the existing hegemony of finance-capital domination and absent state presence to change the narrative, and thus outcome, of the protests that should have put the architects of the crisis on trial.

The insidious role of international finance capital in Lebanon not only was instrumental in maintaining the material relations of power between a series of Western-backed cronies and the state, but also of the narrative that ultimately determined the outcome of the movement.

From the beginning, the Central Bank funded MTV and al-Jadeed worked to frame the protests as anti-Hezbollah rather than anti-corruption. By painting a narrative not unlike the one promulgated in US media at the time, these narratives, in zooming specifically on protesters in right-wing Phalangite or pro-Lebanese Forces areas deflected the framing of the issue away from its finance-capital origins and onto a sectarian and policized narrative weaponized to service US-friendly outcomes.

While Hezbollah abstained to vote for Hariri in his new designation, they previously supported his designation as part of a unity government formed to quell civil tension.

The source of the issue, manifested in the post Civil-war governmental regime that was ushered in in 1993, consisting of Rafic Hariri, Parliament Speaker Nabih Berri, and Central Bank President Riyadh Salameh, had been the new contractor-clientelist bourgeoise that had effectively maintained the clientelist-capitalist regime that had proliferated in the anarchistic civil war environment.

Salameh’s role in facilitating and prolonging US friendly financial policies, containing embezzlement, and the maintenance of a real-estate centric policies, represents the very heart and source of endemic corruption that has reigned Lebanon for decades.

Under his regime, at least $106 billion have been stolen from the Lebanese people through his oversight of the embezzlement and corruption of small-account dollars. In the last two years, strict capital controls provoked by US and Gulf-backed sanctions, designed to strangle Hezbollah and its constituency in Lebanon, have helped throw off a 23 year stable exchange rate, allowing the lira to plummet to less than a tenth of its stable worth.

Hariri, allied with Salameh, defended the Central Bank governor once again at the beginning of this year, insisting that Salameh had “immunity” and that “no one could sack him.”

In December, as a result of the protests, a new government headed by independent candidate and Hezbollah-approved Hassan Diab sought to depart from the reign of US-backed finance capital to push for a slightly more government-accountable role for the new leader and his appointed ministers.

Two separate and conflicting policies of the Diab government vs Central Bank ensued where, attempts were made to mitigate the impacts caused by the extortionary approach of Salameh with more economic relief and resource distribution from the bank itself were obstructed. The clashes between Central Bank Governer Riad Salameh and Hassan Diab, the latter which accused the former of engineering the crisis, manifested itself in contradictory policies and visions for the role of government in Lebanon that were a contributing figure in Diab and his cabinet’s departure from government after the August 4th blast at Beirut’s port 12.

Just weeks before Diab’s resignation, a Lebanese Court ordered the seizure of Salemeh’s assets, many of which were accumulated by his role in running Lebanon’s banks like a corrupt Ponzi scheme, syphoning money from Lebanese depositors. The demand to seize the Central Bank governor’s assets, as well as that of his cronies, was supported by the “People Want the Reform of the System” movement that mobilized in the wake of the court order.

Even the slightest concession, offered by a proposal for a 400,000 LL a month relief package to hardest hit families and relief towards the economic sector, was battled by the then-government’s political opponents in Parliament, including Walid Jumblatt’s Popular Socialist Party (which is now neither of those things) and Future parties. But either way, the level of hyperinflation that had occurred at that time had rendered the distribution, which had been mishandled and botched, had greatly devalued by the time it did reach families.

With Hariri back, one becomes disappointed, but not surprised, by the difficulties Lebanon has of truly shedding its corrupt elite. Yet, in Lebanon, as with elsewhere, the ultimate repressive regime is once again the dictatorship of finance capital and its agents that have, again, effectively sabotaged the ability of policy and popular will to shape and change outcomes.

Julia Kassem is an organizer with USPCN Detroit.