One year on, has Iraq’s anti-government protest movement changed the country? 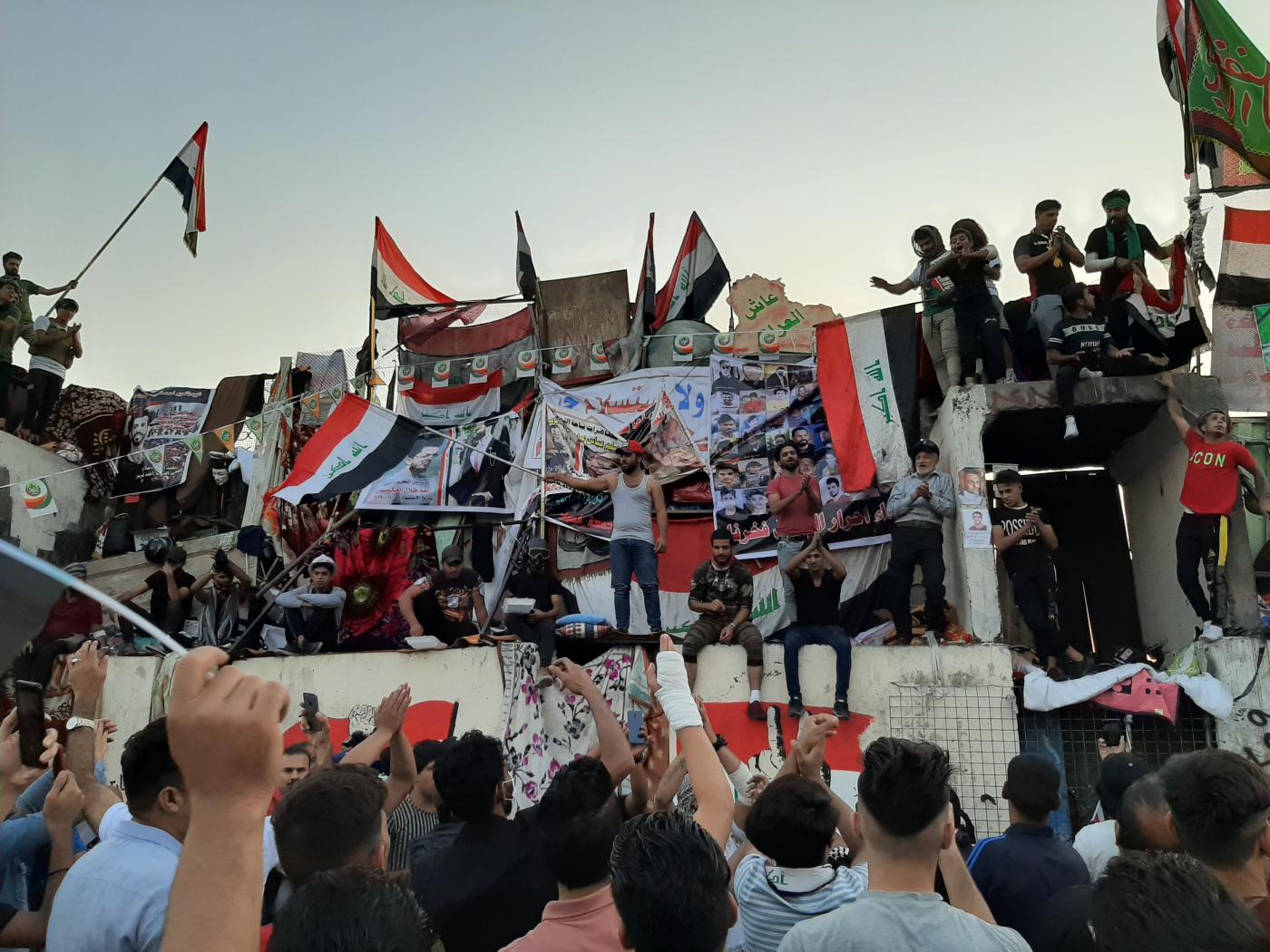 In the year since Iraqis took to the streets en masse to protest against unemployment, corruption, foreign interference and a creaking political system, the country has seen major upheavals and societal change – but not necessarily of the sort that the anti-government protesters were calling for.

The period since the beginning of the demonstrations on 1 October 2019 has seen the ousting of prime ministers and prime ministerial candidates, an international proxy conflict spilling over into assassinations, and the outbreak of a deadly pandemic which has pushed Iraq’s healthcare system to the limit.

In all the chaos, there has been little attention paid to the demands put forward by Iraq’s activists, who continue to demonstrate where they can despite being hobbled by the coronavirus and despite the deaths of more 600 of their number since the start of their campaign.

Ali Khrypt, a Baghdad-based activist who had already been involved in anti-government protests prior to October 2019, said there had been very little in the way of real political change in the last year.

“In my opinion, it did not achieve anything in terms of political reality,” he told Middle East Eye.

“As for the street and the Iraqi youth, it had a great impact. In the past, a small group was rallying to the regime and the devastation that befell the country after the fall of [Saddam Hussein’s] regime – but now every Iraqi home and every young woman and young man rejects and knows what the mistakes are and criticises the work of government.”

On Wednesday evening – as protesters again began to gather in Baghdad’s Tahrir Square to prepare for renewed demonstrations – Iraqi rock band UTN1 released a music video performing the national anthem Mawtini, dedicated to the “memory of the martyrs of the October Revolution”. https://www.youtube.com/embed/Ikw_SsVQK3s?feature=oembed&enablejsapi=1&origin=https%3A%2F%2Fwww.middleeasteye.net

Images and photos in the video depicted Safaa al-Saray, Tahseen Osama, Ahmed Mehenna, Riham Yacoub, Hisham al-Hashimi, along with other activists and figures, who are among the hundreds killed and disappeared since the protests began.

Their pictures have adorned the walls of buildings and tents, clothing and banners since October, with anger only mounting against the security services and militiamen whom the protesters hold responsible for the killings.

The failure, despite repeated promises, of Prime Minister Mustafa al-Kadhimi and other government officials to uncover the truth about their killers and hold them to account has arguably been one of the primary driving forces keeping the protests alive.

“I do not know what the future holds for us and for Iraq in the shadow of the uncontrolled weapons and the militias,” said Khrypt, who was a close friend of Saray, and established a tent dedicated to him on Saadoun Street, outside Tahrir square.

“I think there is no opportunity to improve the situation as long as these fugitives are present.”

Ammar al-Khazaaly, a protest leader in the southern city of Diwaniyah, said it was the “calm before the storm” and that protesters were waiting to see if Kadhimi delivered on any of their demands by a 25 October deadline (a date marking the peak of last year’s protests.)

“Then the protests will return in a strong way if the stated central demands are not implemented,” he told MEE.

The sheer scale of the demonstrations in 2019 came as a shock to many in the political establishment.

Though there had been something of a prelude in Basra the year before, as well as a long established anti-corruption street movement, nothing on this scale had been seen in the country since the overthrow of Saddam Hussein in 2003.

‘We see in these days kidnapping, killing, there are many reports of tracking the activists, trying to kill them, assassinate them. It’s worse than 2019’

The sight of millions of mostly Shia Muslim Iraqis taking to the streets to protest, defying assumed sectarian assumptions about the country, to instead talk about bread and butter issues, was alarming to the establishment.

“For the first time, [we had] the participation of all classes, groups and segments of society, from young and old, women and men of all ages, to demand constitutional political reforms rather than (factional) service demands.”

The response of the state and the entrenched powers was brutal – a combination of violence from the security services and waves of kidnappings and disappearances by shady militia groups aimed at terrifying the protesters, many of whom were new to the street, into submission.

Despite this, one year on, activists are preparing for another big push, their resolve in part strengthened by the loss of their comrades.

Hisham al-Mozani, an activist with the Iraqi al-Amal Association rights group – which has monitored violence and abuses against protesters since 2019 – said threats and mistreatment of protesters had only worsened.

“We see in these days, kidnapping, killings, there are many reports of tracking the activists, trying to kill them, assassinate them. It’s worse than 2019,” he told MEE.

‘Who is killing the protesters?’

The killing of Reham Yacoub, a former protest organiser and women’s rights activist, in Basra in August highlighted the ongoing targeting of activists.

Her death came shortly after the assassination of another activist, Tahseen Osama, while two other prominent activists in the city, Lodia Raymond and Abbas Sobhi, survived attempts on their lives.

Kadhimi has repeatedly pledged to hold those responsible for the killings accountable – the pressure has intensified in part because armed groups (thought by many to be connected) have increasingly been targeting US interests in Iraq.

The fact that on Monday a wayward rocket from a militia, which had been supposedly aimed at US troops in Baghdad airport, ended up killing five children and two women in a nearby village, further fuelled the mounting rage that the state is seemingly unable to rein in rogue elements.

“Because if you get some ordinary soldier or low ranking officer, that will not mean we captured who is killing the protesters. Who is giving the orders? Who made this pattern a part of our political life? We want these guys.”

But despite Kadhimi’s repeated threats, and occasional operations against the militias, he has so far done little to weaken their grip on Iraq’s body politic or hold them accountable.

Last month, his government announced that families of victims could apply for compensation from the state, but so far no funds have been disbursed.

He has also announced the construction of statues in Tahrir Square and the southern city of Nasiriyah to commemorate those killed – but ultimately tackling the power of the armed groups and their affiliated political parties has been beyond his abilities.

One Iraqi official told AFP on condition of anonymity that Kadhimi knew “who and where the killers are, but we cannot arrest them or announce that. It’s too sensitive”.

The demonstrators that first took to the squares of cities across Iraq last years were not a homogenous group, instead ranging from religious conservatives and nationalists to secularists and communists, and a whole range of issues and demands flowed from different corners of the movement.

Nevertheless, there were a number of specific demands common across the movement.

One of these was the introduction of a new electoral law that would allow independent candidates to run in elections, bypassing the political parties who have wielded power in Iraq since 2003.

Kadhimi – who came to power in May after months of wrangling in the wake of the resignation of Adel Abdul Mahdi in December – has pledged to implement the law (which was officially approved by parliament in December) and has set June 2021 for new elections.

But despite being nominally approved, the actual details of the law and its implementation have been subject to heated debate, and many protesters believe it will simply be watered down.

Crucial details around the size of electoral districts and whether candidates would run independently, or on lists, are still being discussed.

Kadhimi has been keen to position himself as being on the side of the protesters, but – regardless of the sincerity of this position – he has had to struggle with an entrenched political establishment who do not want to see their privileges removed, and with few allies in parliament to support him.

“I don’t think it will placate protesters when it is published because people will be looking at what the details are – what is going to change, how will we ensure there are new and better representatives of the people,” said Sajad Jiyad, a political analyst based in Baghdad.

For most of the protesters, the political parties were always the main target, and stripping power away from them, the ultimate goal.

Demonstrations across the country saw party offices vandalised and torched, while many activists told reporters that they sought nothing less than the outright banning of all the post-2003 political parties from future elections.

‘If the election law is passed well and satisfies the mass movement, we will support national figures in the elections’

Kadhimi nominally leads a transitional government that aims to put in place a new system for 2021 elections that will allow it to better reflect the protesters’ wishes.

However, Khrypt said there has been little to suggest that the 2021 elections will differ from those in the past.

“To put it bluntly, until now, there is no clear personality or entity that can politically represent the October youth,” he explained.

Khazaaly said that any support for candidates by the protesters would be based on the final passage of the election law.

“If the election law is passed well and satisfies the mass movement, we will support national figures in the elections,” he explained.

“But if the election law is not passed according to what the street aspires to, there will be a boycott of the elections and a movement to thwart the entire political process.”

A major spark for the uprising was the Iraqi economy, which was already in a dire state prior to October 2019.

Since the outbreak of the coronavirus in March, and the impact of the subsequent lockdown, the situation has become desperate. ‘Man of settlements’: Iraq’s Kadhimi walks the line in anti-corruption drive Read More »

The World Bank has warned that the country’s poverty rate could double to 40 percent this year, and that youth unemployment could rise beyond its current 36 percent.

Kadhimi and his finance minister, Ali Allawi, have proposed a package of privatisations and austerity to combat Iraq’s budget crisis, but nothing has been finalised and, in any case, the proposals are unlikely to be welcomed by an already squeezed populace.

There is, therefore, little to suggest that the widespread anger that first propelled the protest movement will dissipate, even if its achievements have been so far limited.

Jiyad said that, if nothing else, the protest movement changed the way the country viewed politics.

“The current political class is viewed as illegitimate – and that is the great achievement of the protests,” he said.