Palestine and Israel: No self-determination – a reply to Moshé Machover 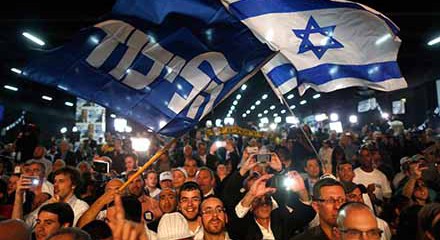 The overthrow of Zionism is incompatible with a Hebrew nation.

Moshé Machover, who I count as a friend and comrade, is a legend in his own lifetime. One of the founders of Matzpen, the Socialist Organisation in Israel, Machover more than any other single person has helped educate a generation of socialists in a Marxist approach to the question of Zionism and Israel.

When I grew up, there was a myth, common amongst the left, that Israel was an example of socialism. The kibbutzim were held out as the socialist ideal – a communal way of living and producing. Little did we know that the kibbutzim were the pioneers of stockade and watchtower colonisation, that they owned industries which exploited the labour of Arab and Misrahi Jewish workers, that they were Jewish-only organisations and that they provided the officer corps for the paramilitary Haganah and Palmach, which spearheaded the massacres and ethnic cleansing of 1948. But, then again, we grew up with the fable that the Arabs in 1948 fled Palestine on instructions from the Arab leaders in order that they could conquer the country and commit another holocaust.

As a teenager groping my way towards a socialist analysis of Zionism, the first thing I read that made sense on the subject was an article in the New Left Review by Moshé, Akiva Orr and Haim Hanegbi, which was reprinted as a pamphlet by the International Socialists (now the Socialist Workers Party).1 It is therefore with some hesitation that I disagree with my teacher.

Moshé argues cogently and forcefully in his article, ‘Palestine and Hebrew self-determination’,2 that without an acceptance by the Palestinians that the Jewish or Hebrew inhabitants of Israel constitute a separate Hebrew nation there can be no resolution of the Israeli-Palestinian conflict. Only by making this concession and accepting the reality of two nations is it possible to find a solution to the existing conflict.

Firstly let me explain that I agree with Moshé and Matzpen that it is impossible for the Palestinians, by themselves, to overthrow Zionism. A solution to Zionist colonisation will not be found within the confines of what was the British mandate territory of Palestine. The balance of forces is such that it would be impossible for the Palestinians to repeat what the black masses achieved in South Africa when they overthrew the apartheid system.

What then is the pathway to a solution? Moshé argues that the only agent for change is the Israeli-Jewish (Hebrew) working class: “… the only social force able directly to achieve this overthrow [of Zionism] is internal: the Israeli masses, primarily the Hebrew working class.” The Israeli-Jewish working class must be tempted into abandoning the advantages that it presently enjoys, or perceives that it enjoys, in a Zionist state based on Jewish supremacy. How is this to be achieved? By granting it the right to form either a separate Hebrew state or, hopefully, it will be enticed to join a wider socialist federation of the Middle East. This is where Moshé and I part company.

My initial response is that of Martin Luther King when remonstrating with white clergymen, who argued that he should have kept quiet over segregation and racism, allowing the law to take its course.

Lamentably, it is an historical fact that privileged groups seldom give up their privileges voluntarily. Individuals may see the moral light and voluntarily give up their unjust posture; but, as Reinhold Niebuhr has reminded us, groups tend to be more immoral than individuals.3

The first thing that should be said is that there is no empirical evidence to support Moshé’s theory. It is based on nothing more than an assertion that, in certain circumstances, the Hebrew or Israeli-Jewish working class will abandon Zionism and act as a revolutionary agent of change. Scientific theories are usually based on existing facts, which they then try to explain. Further observations and predictions based on the theory confirm whether the theory is true or not.

However, there are certain capitalist societies where life is not so simple. In these societies – ethno-nationalist or based on racial supremacy, primarily settler-colonial societies – an alliance forms between the ruling class and its ethnic counterpart in the working class. Such examples include the deep south of the USA, where the white working class saw its main enemy as the black working class. It is a situation repeated over and over again in the white dominions of Canada, Australia, South Africa and New Zealand. In such situations the Marxist theory of the proletariat did not work.

Lenin observed that in imperialist societies, the proletariat shares in the oppression and exploitation of the colonised. It is this which is the material basis of the political backwardness of the western working class to this day and the attraction of national chauvinism. Lenin described how,

If the western proletariat, in the heartland of imperialism, was able to overcome racial/ethnic divisions and extend solidarity to the colonial masses, to at least a partial extent, the settler-colonial working class was totally incapable of reaching out to the working class of the colonised societies. White workers came to the colonies as part of the colonisation process and from the beginning they identified with their own ethnic ruling class rather than the natives. They swapped the oppression they experienced in the mother country for the role of an oppressor in the colonies. Indeed this was the cure for all manner of social ills by colonial reformers such as Edward Gibbon Wakefield, who advocated the emigration of the unemployed to the colonies in order to stave off disorder at home.5 Marx envisaged this when he wrote that “the nation that oppresses another nation forges its own chains”.6 Marx was thinking of Ireland, but what he wrote is applicable to any colonised society. As long as British workers supported British imperialism in Ireland, so long would it be in hock to its own ruling class.

Moshé’s thesis is a utopian fantasy based on a failure to understand the class nature of the settler society. In particular he fails to appreciate that one of the principal characteristics of a settler-colonial society is the intra-class alliance that is formed between the settler bourgeoisie and the settler working class. That is what makes Israel such a stable and reliable state for US imperialism today.

There are, of course, times when the settler bourgeoisie and the settler working class come to blows. This was true of the seamen’s strike in Israel in 1951 and the continued militancy of the Ashdod port workers from the 1960s until today. Indeed the Israeli-Jewish working class has often been a very militant one, even though at the same time it has rejected any alliance with the Israeli Arab working class. The major organisation of the Israeli-Jewish working class, Histadrut, was founded on the rejection of any form of unity between the Jewish-Arab working class and it put this into practice with its destruction of the joint Jewish-Arab railworkers union, which had been formed in 1919.7 Repeatedly Histadrut and the Labour Zionist movement set out to destroy, in the name of Zionism and Jewish intra-class unity, all attempts at Jewish-Arab collaboration.