Palestinian women in the Occupied Territories: an interview with Laila al-Hamdani 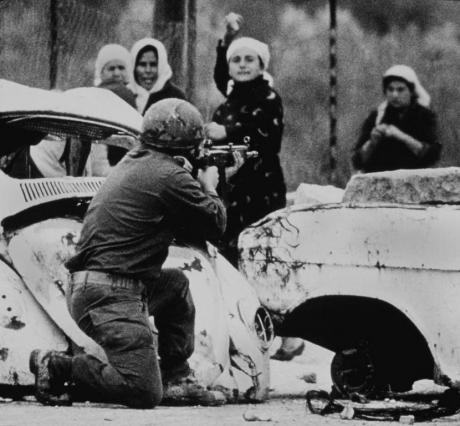 Interview with Laila al-Hamdani describing the role of women in the Occupied Territories as well as the central role they played during the first intifada.

Q. Perhaps we could start by talking about the role of women in the Palestinian national movement in the occupied territories, and especially about their role in the intifada.
A. On the more general point, I will be very brief. Women have been involved in the national struggle since the beginning of the ‘Palestine problem’. They have been active since as early as the 1920s, although until the revolution of 1936, this was confined to urban women who had the opportunity to receive education or who were related in some way to men active in political life, the elite. Rural women did not participate in political life because rural men also did not. In the uprisings of 1921, 1923, 1929 and 1933, women had little opportunity to take part with rural men. The 1936-1939 revolt was the first time that Palestinian women actually went into the mountains smuggling arms or carrying food or water into battlefields. Although the role of women was rather traditionalist in this form, my research has shown that there were women who took up arms just like the men. Women carried the economic burden during the period when the men were in the mountains. It is estimated that some 10,000 men took part in the revolution, out of a total population of less than one million. The economic burden that this entailed has often been ignored.

At this time, urban women were organising strikes, providing aid to prisoners’ families, holding conferences and issuing leaflets which were noticeably more radical than those of male organisations. This was because the men still hoped to be able to persuade the British to renounce their support for Zionism and had not developed a full critique of the mandate system as a whole. With the exile of 1948, women in different areas played different roles which were mainly economic, unlike in the rest of the Arab world where women were more integrated into the national struggle. This point is often ignored. This does not mean that Palestinian women lacked consciousness, but with the creation of 650,000 Palestinian refugees and the economic burden this brought, Palestinian women began going out to work, selling vegetables, cleaning houses-a step towards the proletarianisation of peasant women. Economic life for the refugee women was transformed and this change played a role in developing women’s independence and consciousness in a political, rather than feminist sense.

In the territories occupied in 1967, women were involved in organising before the occupation but, like the men, they tended to favour the wider Arab ideologies like Baathism and Pan-Arabism. Being under backward Jordanian rule did not help West Bank women to advance politically. In this period women in the West Bank were generally confined to working in charitable organisations and other traditional female roles. After ’67, active women gravitated towards the various PLO factions which put no particular emphasis on women’s organisations. Most Palestinian women say ‘Let’s solve our national struggle first and then talk about our situation as women’ . Rightly or wrongly, this has been the state of play for the last 21 years. This said, women have played a role within the organisations, which is important for them as women. People like Rosemary Sayegh have tended to ignore that for an Arab woman to be in a political organisation necessarily means breaking down barriers, being more self aware than women who are not involved in politics. If I might generalise, in conventional society it is possible for man to know about Marxism and to be heavily politically involved but to still confine his wife or his daughter to the house. For a woman to be politicised, she must have fought and she cannot retreat because traditional society will no longer accept her. The only path open to her is to become more revolutionary. This is not because Palestinian women are better than men but because they have no choice.

Q. Are you talking only about urban women now?
A. No. Between 1948 and 1967, it was urban women who worked in charitable societies while rural women worked on the land and in the house. This said, rural women are more economically independent and have more say in the household because they share in production. They do not wear the veil and are more open in their relations with men. From 1967, more rural women became involved. When I was in prison in 1975, almost half the women there were rural. Now rural women are in the majority.

This brings us to the intifada and to the fact that most tasks are being carried out by women.

Q. Let me interrupt for a moment. What proportion of women were involved with the PLO before the intifada?
A. The best I can say is that it was a growing number.

Q. But are we talking about the PLO as a mass movement or as a small organisation with mass support?
A. Until the intifada, thousands of people were enrolled within the PLO, with even greater support outside the organisation. Now, a large percentage of politically active men and women are involved with PLO organisations. Support for the PLO in rural and urban areas, in the 1948 and the 1967 territories, is massive.

To return to the intifada, the long history of women’s involvement and growth in consciousness has not developed into feminism but has produced an increasingly active female role. Without the women, it is debatable whether the intifada would have continued for the last ten months. Women’s involvement in the intifada is on two levels: mass participation and the organisational level. The women’s organisations which have developed over the past 20 years are now geared towards organising for the intifada. The popular committees, for example, are dominated by women. They are active in the medical relief committees which gather information about people’s blood groups and pass the information on to the hospitals. The health committees supervise sanitation to prevent epidemics and check the water in the wells because the Israelis are cutting off supplies of piped water.’ Women form the majority in the education committees which organise alternative studies in houses to substitute for the schools which the Israelis have closed down. The aid committees go to areas which are under curfew or siege and distribute food, money and moral support. The Israelis have difficulty in dealing with these committees because they involve women, not only those who are involved in political groups or women’s organisations but also other women.