Protesters in Iran shout down cleric amid anger over building collapse 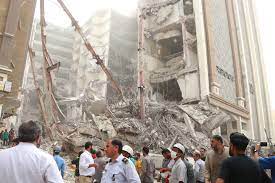 Protesters angry over a building collapse in south-west Iran that killed at least 31 people shouted down an emissary sent by the supreme leader, Ayatollah Ali Khamenei, prompting a crackdown in which riot police clubbed demonstrators and fired teargas, according to online videos.

While the protests so far appear to be leaderless, Arab tribes in the region seemed to join them on Sunday, raising the risk of the unrest intensifying. Already, tensions between Tehran and the west have risen after Iran’s paramilitary Revolutionary Guards on Friday seized two Greek oil tankers.

Ayatollah Mohsen Heidari AleKasir tried to address mourners near the site of the 10-storey Metropol building in the city of Abadan but the hundreds gathered there booed and shouted.

Surrounded by bodyguards, the ayatollah, who is in his 60s, tried to continue but could not. “What’s happening?” the cleric asked a bodyguard, who then leaned in to tell him something.

The cleric tried to address the crowd again: “My dears, please keep calm, as a sign of respect to Abadan, its martyrs and the dear [victims] the whole Iranian nation is mourning tonight.”

The crowd responded by shouting: “Shameless!”

A live broadcast of the event on state television then cut out. Protesters later chanted: “I will kill, I will kill the one who killed my brother!”

The Tehran-based daily newspaper Hamshahri and the semi-official Fars news agency said the protesters attacked the platform where state TV had set up its camera, cutting off its broadcast.

Police ordered the crowd not to chant slogans against the Islamic Republic and ordered them to leave, calling their rally illegal. Video later showed officers confronting and clubbing protesters as clouds of teargas rose. At least one officer fired what appeared to be a shotgun, though it was not clear if it was live fire or so-called “beanbag” rounds designed to stun.

It was not immediately clear if anyone was injured or if police made any arrests.

The details in the videos analysed on Monday corresponded to known features of Abadan, 410 miles (660km) south-west of the capital, Tehran. Foreign-based Farsi-language television channels described teargas and other shots being fired.

Independent newsgathering remains extremely difficult in Iran. During unrest, Iran has disrupted internet and telephone communications to affected areas, while also limiting the movement of journalists inside the country. Reporters Without Borders has described Iran as the third-worst country in the world to be a journalist – behind only North Korea and Eritrea.

After the tower collapse in Abadan last Monday, authorities acknowledged the building’s owner and corrupt government officials had allowed construction to continue despite concerns over shoddy workmanship. Authorities have arrested 13 people as part of an investigation into the disaster, including the city’s mayor.

Rescue teams pulled two more bodies from the rubble on Monday, bringing the death toll to 31, according to the state-run IRNA news agency. Authorities fear more people could be trapped under the debris.

Street protests in several Iranian cities in recent weeks, sparked by the soaring costs of food and other staples, have underscored the challenges facing Iran’s government from global shortages caused by war in Ukraine and the continued imposition of Western sanctions as talks to restore a 2015 nuclear deal remain stalled.

In several places, the protests quickly took a political turn with Iranians chanting slogans against President Ebrahim Raisi and even the country’s highest authority and supreme leader, Ayatollah Ali Khamenei. A violent crackdown by the authorities on the protests has resulted in at least five deaths and scores of arrests, according to human rights activists and posts on social media sites.

Prices spiked two weeks ago after the government cut subsidies for eggs, chicken, dairy products and cooking oil. An increase in the price of bread earlier in the month was caused by government adjustments to wheat prices but is also linked to the worldwide shortage of the commodity because of Russia’s invasion of Ukraine, economists say.

The government had hoped that negotiations to revive the multilateral 2015 nuclear deal between Iran and world powers would lead to the removal of one source of economic hardship: Western sanctions that were reimposed on Tehran after the Trump administration withdrew from the deal in 2018. In addition to the sanctions, though, many Iranians blame government corruption and ineptitude for a growing litany of woes, including high inflation.

The current unrest recalls waves of protests that have broken out in recent years, including in 2019, when demonstrations were sparked by fuel price increases. Hundreds were killed and thousands of people were arrested during the protests in dozens of cities, according to human rights groups. The latest protests have been smaller in size and focused in heavily impoverished areas, including the Khuzestan province in southwest Iran, a frequent site of popular discontent.

Teachers have also been protesting for months to demand an increase in wages, amid complaints that educators work two or three jobs to get by. Security forces arrested at least 14 teachers at protests in early May, according to the Emtedad News site. Senior politicians have warned in recent months that the government could face a backlash because of the increasingly dire economic crisis.

A return to the nuclear deal would lead to the removal of many sanctions in exchange for curbs on Iran’s nuclear program.

Talks in Vienna earlier this year between all the signatories to the deal, as well as the United States, stalled in March due to an Iranian demand that the Islamic Revolutionary Guard Corps, the strongest military force in the country, be removed from the U.S. list of terrorist organizations.

The Biden administration has not replied to the demand, but Israel’s prime minister, in messages posted on Twitter this week, said Biden had confirmed to him in a telephone call late last month that he would “keep … the IRGC” on the list, “which is where it belongs.”

The European Union’s coordinator for the Iran nuclear deal negotiations, Enrique Mora, visited Tehran on May 11 in an attempt to restart the nuclear talks, but Iran’s leaders may have already reached the conclusion that the deal is out of reach, observers say.

“The recent moves of the Iranian government send a very clear message that they’ve lost hope in the nuclear deal or don’t want to enact it,” Saeed Leylaz, an economist and political analyst based in Tehran, said in a telephone interview, referring to the subsidy cuts. “With these economic reforms they’re sending the message that they don’t depend on the deal anymore.”

The United States has also expressed pessimism. At a Senate Foreign Relations Committee hearing on Wednesday, U.S. Special Envoy for Iran Robert Malley said that the chances of reaching a deal are “at best, tenuous.”

Even if the nuclear deal is restored, Iran, like many other countries, is likely to suffer from the global wheat shortage.

“The issue of wheat is tied to issues of food security, international security and the crisis in Ukraine,” Leylaz said. “With the current estimates, it appears that it may be a tough winter in terms of supplying foodstuffs.”

Ordinary Iranians are already feeling the pinch. Atoosa, an unemployed resident of Tehran, the capital, said the prices of milk and eggs have skyrocketed at her local grocery store and that people have taken to comparing prices at different stores to see if they can find a better deal.

“We can’t do anything. Everything is in the hands of the government powers,” she said. “If they wanted to, they could remove this. We’re all just a bunch of slaves.”

Grocery stores are not necessarily benefiting from the price hikes. One worker at a grocery store in Shahr-e Kord, a small town in central Iran that has been rocked by protests in the past two weeks, said that their business has dropped by half since the government slashed the subsidies.

“The milk that we sold has more than doubled in price. Nobody is buying it, it’s just sitting there. Eggs, chicken, it’s all the same,” said the worker, who spoke on the condition of anonymity for safety reasons. “Everyone is complaining about this issue and they’re unhappy about the prices. It would be great if they brought the prices down.”

Security forces appear to open fire on a crowd of protesters in Shahr-e Kord in one video posted on social media. Another video from the city shows a plainclothes security officer dragging a protester off the top of a car amid the sounds of gunshots and screams.

Protesters chant “Death to Khamenei” and “Death to Raisi” while gathered around what appears to be a burning car in the town of Ardal in another video posted online.

Many videos posted on social media in the past two weeks show the heavy presence of security forces in full riot gear in numerous cities, including Tehran. The Washington Post could not independently verify the authenticity of these videos.

Along with deploying security forces, the Iranian government has also tried to curb the spread of videos and information about the protests by slowing down the Internet. NetBlocks, an Internet monitoring group, logged severe disruptions in Internet access in Iran in mid-May.

Iranian officials have said the government will give financial support to low-income families to offset the recent price increases but officials have also not ruled out raising prices on other goods. At a gathering in Tehran focused on privatization on Saturday, Raisi said that the government will be making some “tough decisions” without providing further details, according to YJC, a news site affiliated with Iranian state television.

“These protests and frustrations are not unexpected at all,” said Hadi Ghaemi, executive director of the Center for Human Rights in Iran, a New York-based advocacy group. “This is a culmination of an economic collapse and a complete loss of faith in the political system.”

“The country is very volatile and hungering for change,” he said.