Protesters in Iran express outrage at economic conditions, a testament to a failed domestic agenda of neoliberalism and privatization 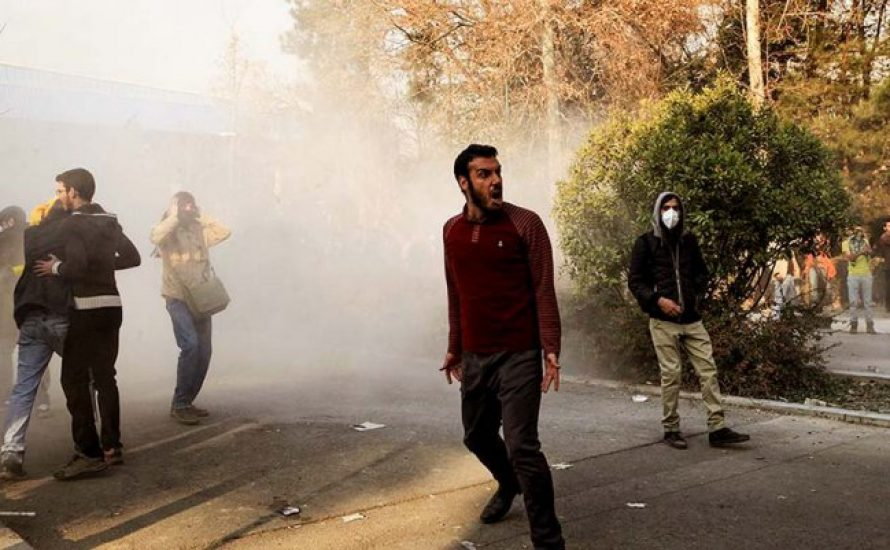 Over the past week, protests have erupted in the streets of Iranian cities. This might not be surprising for the people who follow Iranian politics. The Iranian regime is well known for being repressive and brutal in its suppression of dissidents and this is not the first time Iranian people have taken to streets to defy theocracy.

At the risk of oversimplification, I would propose that the fundamental difference between the recent protests and the Green Movement relates to one classic concept: Class.

The current protests are the result of years of enormous economic pressure on the poor. In the West, it is commonly accepted that the international sanctions are the cause of the impoverishment of Iranians. But relying on external factors solely cannot sufficiently explain why the Iranians have experienced so much economic deterioration. What has been absent in outside analyses of the economic and political situation in Iran, especially by the leftists in the West, is a comprehensive appraisal of the current administration’s economic agenda.

Iranian people are protesting the neoliberal economic plans of the “moderate” administration of President Rouhani, whom many leftists see as a reasonable political figure.

Since the start of the “Reformist Movement” with the presidency of Mohammad Khatami in 1997 to today, the binary of Iranian politics has been Reformist/Principlist. The former refers to politicians who want to push for democratic reforms in the regime, increase political and social freedoms and normalize relationships or at least decrease tensions with the West. The latter, represents the more authoritarian and ideological sections of the regime, which are close to the Supreme Leader and the Islamic Revolutionary Guards Corps (IRGC). In terms of economic policies, the Reformists have always endorsed the neoliberal prescriptions. They inherited this economic ideology from President Rafsanjani’s administration (1989-1998). The Principlists have not been any different. Despite the populist rhetoric of President Ahmadinejad, the biggest privatizations and the harshest crackdown on the unions happened during his term in office. The roots of the Islamic Republic’s seemingly pro-poor discourse, which was present in Ahmadinejad’s campaign promises and later rhetoric, need more extensive investigation. Taking this rhetoric seriously is as naive as thinking that the “Communist” government of China is still Communist. It is true that many poor people voted for Ahmadinejad but it is also important to remember that the poor got nothing in return.

The political binary of Iran, however, has experienced changes and transmutations. After the presidential election of 2009, the reformist candidates (Mir Hossein Mousavi and Mehdi Karroubi) disputed the victory of Ahmadinejad and accused the government of fraud in the election. They then asked their supporters to take to the streets. They founded the Green Movement, with mostly democratic demands. From June 2009 to February 2011, when the leaders of the movement were put under house arrest (which continues to today), Iran experienced its most turbulent days since the early 1980s. The militant reformism of Mousavi and Karroubi was the political response of the “middle class” to its political suppression and economic expropriation.

Ahmadinejad’s second term which started with suppression ended with economic collapse. U.S. and EU’s economic sanctions were imposed to force Iran to drop plans for nuclear proliferation. The enormous economic pressure brought the country to the verge of bankruptcy. In a matter of months, the national currency depreciated to a third of its previous value and prices of goods skyrocketed. Hundreds of firms and businesses were shut down and thousands of people lost their jobs. The Principlists were left with no choice other than retreat.

Hasan Rouhani was elected president in 2013. His administration of “prudence and hope” promised to solve the nuclear issue, open up the political space and absorb foreign investment. The reformists saw him as a mediator coming back to power and overwhelmingly backed him, so did the majority of the Green Movement supporters and enthusiasts.

The discourse of the Reformists changed gradually during Rouhani’s presidency. A minority remained faithful to the democratic demands but the majority shifted to prioritize other issues: the animosity with the West, droughts and ecological disasters, foreign investment and beyond all, the role of Iran in the Middle East and particularly in the Syrian Civil War. Whereas the old Reformists had always criticized political and economic investment in Hezbollah, Syria and other allies, the new Reformism saw Iran’s foreign interventions necessary in maintaining national security, deterring Islamic terrorism and defying Israel, Saudi Arabia and Trump. The Reformists who formerly opposed the IRGC and were even arrested by them during the Green Movement, now sought to merge their ideology with anti-western ideology of the hardliners. The solution could only be based on common grounds: an expansionist nationalism and a brutal capitalist order.

Rouhani’s administration — with support of the Supreme Leader — was successful in reaching an agreement with P5+1 (the permanent members of UN security council plus Germany). But the promised economic growth was never realized. The majority of Western media and political commentators attribute this failure to inability to encourage foreign investment in the country. But the premise of such an evaluation lies in a belief in a “trickle-down economy”: the idea that if foreign capital starts pouring into the country’s bankrupt industry, everyone will benefit. This mindset is shared by the Reformists. But no matter how much capital pours into Iran, the neoliberal economic program of Rouhani will direct the money to the country’s rich elite, who largely have no incentive to invest in production. Corruption, seigniorage, and manipulation of the market (especially the foreign currency market) have helped the rich to find profitable businesses in importing Porsche and Maserati. The poor have become poorer and any call for redistribution of wealth is harshly suppressed. Rouhani has been merciless in suppressing the unions and imprisoning labor activists.

The current unrest is a cry from these very poor and disenfranchised Iranians. After reelection of Rouhani in 2017, he felt confident to further ignore his campaign promises. The electoral strategy of Reformists in the past two elections has been simple: threatening the people. Making a Leviathan-like image of Ahmadinejad, they warned people that not voting for Rouhani will take them back to the “days of sanction.” The Reformists deployed their ideological troops to convince people: Journalists, politicians, academics, artists and celebrities all called for being “reasonable” in elections and to embrace the logic of the lesser evil. They were confident that, in absence of any independent political organization or even discourse, they would capture people’s minds. This is exactly why they, alongside the Western commentators, were “surprised” by these protests. The protests were unexpected because the political elite of the society didn’t know these people existed. The popular classes in Iran have been so voiceless that first signs of their dissidence have made the world puzzled.

No matter how far the unrest develops and no matter what the consequences are, a new era has begun in Iran. The people do not buy Reformism easily anymore. This does not necessarily imply that the Reformists are facing a legitimacy crisis. They — with full support of their opponents — will crush the protests and demonize the protestors. The Islamic Republic is the master of conspiracy theory and they have already started to claim that the hands of the “enemy” (Trump, Israel, the Saudis, the monarchists etc) are behind the protests. The Reformists have so far shown that they will not oppose this narrative, at least not strongly. Lacking any alternative voice, they will be the ones to narrate the story. When the protests are suppressed they will come out of their ivory towers and lecture about the dangers of violence and radicalism, especially when the country is surrounded by enemies. The old trick of suppressing the working class and the poor with the help of the nationalist discourse can be easily used in Iran and it is the urgent duty of the left to obstruct it.

Mohammad PourAbdollah Tootkaboni is a former student activist from Iran. He was a member of a leftist student organization in Iran and was expelled from the University of Tehran, imprisoned for 3 years and then forced to exile. He currently studies sociology at Hunter College, New York.