Redrawing the map: Why is Trump abandoning the nuclear deal with Iran? 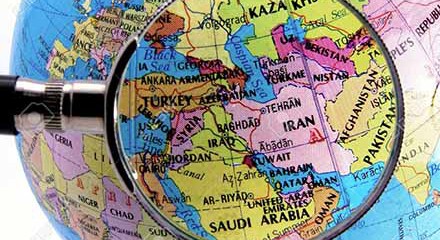 In a single speech on October 13, lasting just a few minutes, Donald Trump managed to succeed in doing what had seemed impossible for decades – uniting the Iranian government and the almost all the opposition to the regime (ironically including sections of Trump’s own ‘regime change from above’ gang), as well as the majority of Iranians inside and outside the country.

Having turned a deaf ear to pleas from European leaders, members of Congress and the Senate, as well as a large chunk of his own administration, the president’s ‘decertification’ of the Iran nuclear deal was, at least in the short term, in effect a gift to the Islamic regime in Tehran. As sections of the Iranian left have maintained, the country’s religious leaders thrive in situations of crises provoked by US threats – it could be argued that they owe their survival to them.

Over the last 16 years the US ‘war on terror’ has provided helpful conditions – not only by getting rid of its main regional enemies, the Taliban in Afghanistan and Saddam Hussein in Iraq, but internationally the Islamic regime loves to present itself as a victim of global injustice. Trump has given Tehran a helping hand on this one, with Britain, Germany and France united in their opposition to the US president’s stance. In the British parliament, condemnation of Trump’s statement united Blairites with Corbyn supporters, pro-Brexit Tories with ‘remainers’, and the Democratic Unionist Party with the Scottish nationalists. Meanwhile, European politicians did not shy away from expressing their disappointment.

A joint statement by British prime minister Theresa May and German chancellor Angela Merkel said the Joint Comprehensive Plan of Action (JCPOA) – the Iran nuclear deal – was “the culmination of 13 years of diplomacy” and “a major step toward ensuring that Iran’s nuclear programme is not diverted for military purposes”.

Of course, the European Union’s main concern is the economic benefits of the Iran nuclear agreement and the possibility of lucrative deals, which they hope will open up new markets. Having said that, many European firms have in the past faced huge penalties for trading with Iran and, at a time when we are witnessing renewed trade wars, Trump’s line on Iran could become a serious matter of contention between the EU and the US – although at this stage, of course, no-one can predict where the UK will stand, if such a situation occurs. However, if the US Congress agrees to new sanctions, it is also possible that European countries – not only threatened with potentially heavy penalties, but also eager to maintain economic relations with the US – would toe the line of the world hegemon.

Can we deduce from all this that there is consensus in opposition to Trump’s position? Not really. As always there are those in the US administration whose only purpose in politics seems to be taking revenge on Iran, and more particularly on the Iranian people, for the 1979 revolution, which saw the overthrow of the US stooge, the shah of Iran. Former chief strategist Steve Bannon may have left the White House, but Trump is surrounded by neoconservatives whose central political ambition seems to be the enforcement of regime change from above in Iran: John Bolton, Rudy Giuliani and even Trump’s main Republican opponent, John McCain, agree with this particular piece of Trump lunacy. And, of course, there remains amongst Iranians a minority under the illusion that regime change from above will bring about ‘civil society’, democracy and the rule of law (presumably with the return of the shah’s son or the rule of the loony religious cult known as the Mojahedin).

Within minutes of Trump’s speech Iranian president Hassan Rouhani appeared on TV with his response: “As long as our rights are guaranteed, as long as our interests require, and as long as we enjoy its benefits, we will respect the JCPOA within the framework of the interests of our nation.” However, Rouhani’s foreign minister, Mohammad Javad Zarif, warned of a different outcome:

If they revive the sanctions and we face an inability to use the deal in oil, gas and shipping arenas, and for bringing our money to the country, we have the right to make a decision about the continuation of our presence in the JCPOA.

If Congress imposes new sanctions, the first victim will be Iran’s multi billion-dollar contract with US plane manufacturer Boeing. On this, Zarif said: “In our view, there is no problem, but if the US government impedes this contract, then they haven’t honoured their commitments under the JCPOA.”

Iran’s supreme leader, Ali Khamenei, confirmed that Tehran would not willingly abandon the internationally backed nuclear deal – he welcomed the reaction of its European signatories to Trump’s decertification.

Iran’s relations with Hamas and Hezbollah are often mentioned as a source of ‘instability’ in the region. Apparently this is what Trump means by claiming Iran is breaching the “spirit” of the deal.

I have been a life-long critic of Hezbollah and I have no illusions about its ‘social’ activities in south Lebanon. I blame it for events that led to Irangate. As far as Hamas is concerned, after the 1967 war with Egypt, Israel hunted down secular Palestinian Liberation Organisation factions, but in Gaza it dropped what had been Egypt’s policy for many years: the imposition of restrictions against Islamist activists. This relaxation played a crucial role in the creation of Hamas (influenced ideologically by the Muslim Brotherhood) and its subsequent evolution into a major political force.

In fact, for many years Israel tolerated and at times encouraged such activists as a counterweight to the secular nationalists of the PLO and its dominant faction, Fatah, and this inevitably strengthened the position of Hamas – although Iran’s own relations with Hamas has had its ups and downs.

We have to remember that, as far as Iran’s Islamic republic is concerned, sending arms to both Hamas and Hezbollah is a form of insurance. Iranian nationalists, who keep telling us that ‘Iran should stop arming these terrorists’ and ‘concentrate on the country’s own interests’, forget that, had it not been for fear of retaliation by Hezbollah, Israel would have bombed Iran’s nuclear installations a long time ago. That would have had disastrous consequences not just for Iran, but for the entire region. Of course, now that Egypt’s Abdul Fattah el-Sisi, not Khamenei, is Hamas’s best friend, Trump claims Iran is supporting the Taliban.

Here a bit of history might help the US president. When the Taliban were in power in Kabul their main religious/political opposition was from Iran’s Islamic Republic. In 2001, as far as the war against the Taliban was concerned, Iran’s then reformist president, Mohammad Khatami, gave all the political and logistic support he could to the US under its neoconservative president, George W Bush. What was Bush’s response? Naming Iran as a “rogue state”. So if there is any ‘cooperation’ between Iran and the Taliban, we know how that came about.

As for the claim that Iran’s Revolutionary Guards (or Pasdaran) are a terrorist organisation, up until a few months ago when Iran was fighting Islamic State in Syria, the Pasdaran were hailed in the US media as the most effective force fighting ‘Jihadi terrorists’ and all this culminated in the Guards’ commander, major-general Qasem Soleimani, appearing on the cover of Time Magazine, which welcomed Pasdaran’s military operations.

Of course, all this is related to the current situation in Kirkuk. As we predicted, while Islamic State is losing territory in Syria as well as Iraq, the battle for the areas ‘evacuated’ by the jihadi group is creating new conflicts. The Kurdish regional government tried to take advantage of all this by organising a referendum on Kurdish independence, but this week Baghdad government troops, accompanied by Shia militias, have moved into Kirkuk.

This is a rather sad end to the silly miscalculation of Kurdish regional president Masoud Barzani, but it also reflects the worries of both the Iranian and the Iraqi governments about the current White House incumbent and his closest ‘advisors’. As Trump keeps saying, they are not into ‘nation building’, so the claim that they want regime change in Tehran is in reality code for their preference to see the destruction of the current states of both Iran and Iraq, and their replacement with smaller, national/regional governments more subservient to US foreign policy.

Of course, as far as economic policy is concerned, both Iran’s Islamic Republic and the Shia government installed in Baghdad in 2003 work entirely within the frameworks of neoliberal capitalism. However, when it comes to politics, Iran is not exactly in the US sphere of influence and current thinking on Iraq in the White House seems to be: ‘Let us get rid of the problem once and for all, by overturning the entire national set-up – Iraq can be divided into three separate entities surely.

In these circumstances one can only laugh at ‘leftwing’ Iranian Kurdish leaders who claim that a future ‘independent’ Kurdistan (‘liberated’ from Iran and Iraq thanks to US military and financial help) will be a step towards socialism. Global capital is already up in arms about the soft anti-austerity economic programme of the Corbyn/McDonnell opposition in the UK, because it challenges neoliberal economic dogma (it definitely does not challenge capitalism, as so many Corbynistas keep telling us). So how can anyone imagine that imperialism would tolerate ‘socialist’ economic policies in a tiny, land-locked Kurdish republic?

The US state department (not just Donald Trump) is the main sponsor of the attacks of the Labour Party right and the UK media on Corbyn’s soft anti-war stance. So are we really saying that it will allow a new ‘independent’ Kurdistan to exercise a ‘socialist’ foreign policy? One that might challenge Israel’s nuclear programme, for example? One that will be in solidarity with the Palestinians? The answer is, of course, in the negative. The Iranian Kurdish groups propagating such ideas have lost touch with reality – they are now part of the problem rather than the solution to the upheavals in the region.