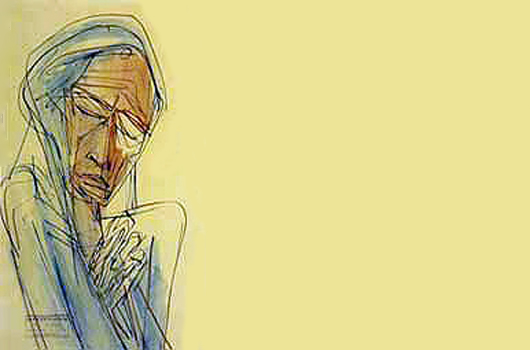 Houshang Pezeshgnia, Iranian artist (1917-1972) was one of the first modernist painters in the country. He attended the College of art in Istanbul studying under professor Leopold Louis. On his return to Iran he worked alongside Ebrahim Golestan at the National Iranian Oil Company Publications. It is in these years that he created his best works. Later he moved to Tehran.

In his painting Houshang Pezeshgnia focused on figures from working class and poor backgrounds.

His works were exhibited in Tehran’s Apadana Gallery alongside other Iranian artists. He also had a number of successful exhibitions in Paris and London.

Pezeshgnia also made a film called Strip based on Laleh, a short story by Sadegh Hedayat.

The last years of his life he lived in relative obscurity and died in poverty of a heart attack in 1972.