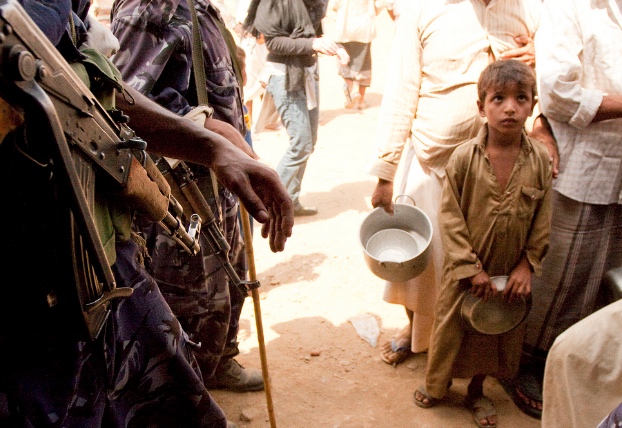 As President Trump tries to ban refugees, he looks poised to create more of them.

The structural logic should be familiar by now — and Iraq is just one example. America and its partners help lay waste to a Muslim majority country and enable the proliferation of armed groups, some of whom terrorize the local population. The military industrial complex gets richer. The targeted society loses its means of reproduction: infrastructure is decimated, social services cease functioning, jobs vanish, prices rise, security dissipates, homes are obliterated, and the death toll swells. Millions of refugees flee, a small portion of them to the West. Meanwhile there are periodic terror attacks in Europe and North America with a tangential relationship to insurgents in places the West attacked and the refugees face racism and legal barriers when seeking new lives in the countries that ruined their old ones.

As soon as Trump was sworn in, the White House’s website posted short overviews of several policy areas. This characteristically bellicose material names two countries that the administration sees as a “threat” to the United States: North Korea and Iran.

A direct US military attack on Iran would be a violation of international law that would endanger thousands of Iranian civilians, destroy social services, make Iranians poorer, and create yet another wave of refugees. The possibility of this happening is real. Trump’s team consists of people with long records of anti-Iran belligerence like CIA director Mike Pompeo, Defense Secretary James Mattis, and former national security adviser Michael Flynn. Recently Flynn put Iran “on notice” and the next day the Trump administration placed new sanctions on the country.

High ranking members of Trump’s NSC raise similar concerns. Retired US Army Col. Derek Harvey, who leads the National Security Council’s (NSC) Middle East team as the special assistant to the president and White House coordinator for the Middle East and North Africa, has a history of focusing on how to “push back” against Iran. Col. Joel Rayburn, who serves as the NSC director on Iraq, Iran, Lebanon and Syria, is an army intelligence officer who like Harvey has a “dim view” of Iran. In a phone call between Trump and King Salman of Saudi Arabia, a key US partner that sees Iran as its main enemy, the two agreed to “address” Iran’s “destabilizing regional activities.”

The latter could be a sign of danger for Lebanon should the administration decide to weaken Iran by going after Hezbollah, its Lebanese ally. The US ruling class sees Iran as a barrier to the American goal of maintaining dominance in the Middle East, a project in which Israel plays a key part.

Both Israeli and American elites have long blustered about Iran’s supposed threat to Israel and the Iran-Hamas alliance. Though Trump criticized Israel’s announcement of its latest round of settlement construction, this statement can be seen as just another instance of a decades-long pattern: Israel builds illegal settlements and American politicians occasionally issue a mild rebuke while giving Israel the political cover, weapons, and money it needs to build them and to carry a vast array of other crimes in which the United States participates.