Revolution in Iran: was it possible in 1921? 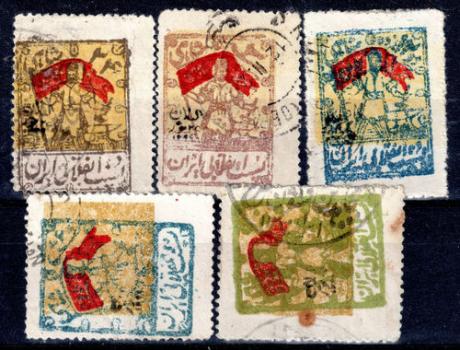 Article discussing the little-known 1920-21 uprising in the Gilan province of northern Iran, and its importance for the workers’ movement in both Iran itself and the wider middle-east.

My “Persian tale’? There were a few hundred of us ragged Russians down there. One day we had a telegram from the Central Committee: Cut your losses, revolution in Iran now off. But for that we would have got to Tehran.’ (Yakov Blumkin, Comintern envoy, quoted in Victor Serge, Memoirs of a Revolutionary, London, 1963, p256.)

Gilan – more than a symbol

The period immediately following the Russian revolution occupies a special, still emotive, place in the European workers’ movement. In the confused conditions following the collapse of the Central Powers, and under the inspiration of events in Petrograd and Moscow, several attempts were made to extend the frontiers of workers’ power – in Berlin, Munich and Budapest in 1919, and in the Turin soviets of 1919-20. All were in the end defeated by the resurgent forces of counter-revolution; and the cost of these defeats was, as we now know, so enormous – not only for the individual movements themselves, but also for the evolution of the post-revolutionary regime in Russia.

Yet, if the Spartakists and the Budapest militia retain a special place in the memory of the European movement, the same cannot be said of an important and in some ways comparable episode in the history of Middle Eastern communism, namely the insurgent republic that was established in the Gilan province of northern Iran in June 1920 and lasted for sixteen months until its destruction by the central government in October of the following year. The history of Middle Eastern communism is too often seen as having begun as an atomised, underground process, far removed from the mainstreams of revolutionary politics in Europe or East Asia. This is in part accurate, and for much of the region the main channel of influence was initially the immigration to Palestine of Jewish militants formed in eastern Europe. But this isolation of the Middle Eastern communist movement was a later development, a product of the earlier defeat of movements that arose in the aftermath of the first world war very much as did those in Europe – amidst the collapse of the old empires and in close connection with the Russian revolution. These movements, in Turkey and Iran, were to some extent comparable in the conditions of their formation to the militant vanguards of communism in Europe; and the Iranian movement in particular mobilised a substantial force of Iranian proletarians in these years.

The Gilan Republic initiated a revolutionary movement in Iran; it saw the establishment of the first communist party in Asia and for the first time planted the red flag in the soil of the Middle East as part of an organised bid for state power. It was its defeat, like that of the insurrections in central Europe, which ushered in a period of defensive clandestinity. It thereby dispersed the potential which had earlier been revealed, contributed to the encirclement of Russia and made the Iranian CP so absolutely dependent on the CPSU. 1

Short-lived and regional as it was, the Gilan Republic is therefore of more than symbolic or antiquarian interest; like its European counterparts it presaged many political questions that were important for the whole later history of the communist movement in the colonial world. Among the questions posed in the Gilan experience were: the place of the agrarian question in the revolutionary struggle, the forms of class alliance appropriate in colonial and semi-colonial countries, the links between anti-imperialist and socially revolutionary struggles, the problem of converting a regional revolt into a nation-wide movement, the relationship to the Islamic religion and to the Muslim clergy. The Gilan experience also raises in a very direct way a problem that goes far beyond the colonial world, namely the relationship between the revolutionary struggle in one country and the policies of an already established revolutionary state. For there is no doubt that the movement in Gilan relied heavily on Russian support, yet that after some time this support was withdrawn and that the Russians reached an accommodation with the central government. This policy shift occurred not in the era of Stalinist degeneration nor in that of Mao’s Three Worlds Theory, but at a time when Lenin and Trotsky were at the heights of their influence in the Russian party. Whilst this does not necessarily mean that the Russian policy was justified, it raises a very interesting example of the links between revolutionary movements and states and is a test case against which to judge any general conception of what an internationalist foreign policy might be.

Despite its brevity, the Gilan Republic is also important for the history of the revolutionary movement in Iran itself. Whilst it provided the context for the establishment of the Communist Party of Persia in June 1920, it was also the first and so far only time in which Middle Eastern communists were active in a radical rural guerrilla movement of a kind more commonly associated with Latin America or the Far East. Both the communists and their radical nationalist allies were products of the left wing of the constitutional movement that arose after 1906. In this sense the Gilan Republic represented the final, socially revolutionary, potential of that upheaval, and its defeat in late 1921 not only marked the end of the movement’s course, but, as in the analogous cases in Europe, it ushered in a new counter-revolutionary regime. For 1921 marked the advent to power of Reze Khan, the military dictator who was encouraged by the British to seize power precisely in order to crush the revolutionary movement in north Iran. Fifty-eight years later, as we live through the aftermath of the Pahlavi dynasty’s overthrow, it is important to remember the proletarian and revolutionary traditions of the Iranian people which the Pahlavi dynasty was created to suppress. Through the suppression of these earlier movements, the Pahlavis not only established their own position but also created a political vacuum in which other, far less progressive opposition currents have been able to grow. Indeed it is an especially important corrective to remember the Gilan Republic at a time when the Ayatollah Khomeini and his associates would have us believe that they represent the sole tradition of valid political opposition in Iran.