Sara R. Farris, In the Name of Women’s Rights: The Rise of Femonationalism – Book Review 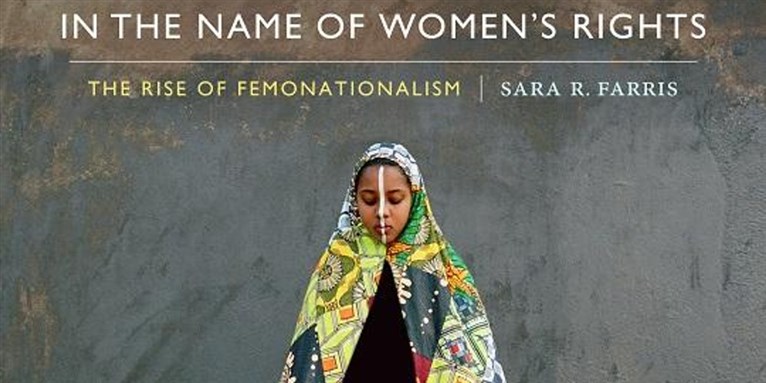 Farris’ new book In the Name of Women’s Rights: The Rise of Femonationalism illuminates the particular ways in which feminist themes have been instrumentalized by right-wing nationalist parties as well as some feminists in Europe in order to further their anti-Islam and anti-immigrant agenda.

In recent years, feminism has been deployed in odd ways. We have witnessed the mobilization of feminist tropes by far-right nationalist parties in anti-Islam and anti-immigration campaigns across Europe. Simultaneously, Muslim men have been stigmatized by a range of feminists and femocrats under the banner of gender equality. In the United States, not only has gender equality been brandished to justify imperialist interventions in countries with majority Muslim populations, but, more recently, high-powered and highly visible corporate women, such as Facebook’s chief operating officer Sheryl Sandberg, have publicly endorsed a form of feminism that is perfectly compatible with neo-liberal capitalism. How can we account for these unsettling alignments between feminism and non-emancipatory agendas? How, in other words, can we account for feminism not only being “mainstreamed” but also its increasing mobilization as part of neoliberal and neo-conservative political projects?

In order to address these urgent questions, Sara Farris and I recently co-edited a new formations issue on “Righting Feminism.” The issue both charts and attempts to theorize the emergence of a complex new constellation across the globe. On the one hand, we have witnessed more women publicly identifying as feminists, suggesting that feminism has become a mark of pride and a source of social and cultural capital.  On the other hand, certain aspects of the feminist project have increasingly become aligned with reactionary xenophobic politics. In my own work I examine the rise of what I have called neoliberal feminism in the United States, while, Farris, for her part, has focused on Europe, offering us a much-needed political economic perspective.

Drawing on the insights of scholars such as Joan Scott and Hester Eisenstein, Farris’ new book In the Name of Women’s Rights: The Rise of Femonationalism illuminates the particular ways in which feminist themes have been instrumentalized by right-wing nationalist parties as well as some feminists in Europe in order to further their anti-Islam and anti-immigrant agenda. The book juxtaposes a range of actors in France, the Netherlands, and Italy: from Marine Le Pen’s National Front and Geert Wilders Party for Freedom through neoliberals involved in implementing civic integration and workfare programs, to a number of high-profile feminists. The convergence of these different actors around the two axes of anti-Islam and gender equality, a convergence Sara Farris aptly terms femonationalism, is puzzling and disturbing precisely because in their Islamophobic articulations of women’s rights, these European actors seem to undermine some of their core ideological commitments: right-wing nationalist parties like the National Front undercut their historically anti-women rights agenda and high profile feminists violate their pronounced commitment to equality and even anti-racism. In other words, a heterogeneous anti-Islam front in Europe has emerged, one that presents sexism and patriarchy as the exclusive domain of the Muslim Other.

Whereas Muslim and non-Western men are portrayed as inherently sexist and thus rendered undesirable parts of the national fabric, their female counterparts have been portrayed as passive victims, who, in the eyes of all femonationalists, are in need of redemption.

In order to account for these unsettling convergences and counter-intuitive alignments—particularly between right-wing nationalists and a number of high-profile feminists—Farris makes a straightforward argument. There has been, she claims, an overlooked splitting in the way in which different French, Dutch and Italian femonationalist actors represent Muslim and non-Western migrant men and women. Whereas Muslim and non-Western men are portrayed as inherently sexist and thus rendered undesirable parts of the national fabric, their female counterparts have been portrayed as passive victims, who, in the eyes of all femonationalists, are in need of redemption.

Farris documents how this femonationalist rhetoric draws on a long history of racist and gendered colonial and imperialist figurations, while arguing that there are underlying economic motivations for the welcoming of migrant women into various European nations alongside the simultaneous—and much more discussed—vilification of Muslim and non-Western migrant men.  It is not only that deflecting sexism onto the Muslim male Other serves to foster a sense of cultural superiority and justification for neo-imperialist projects, but also—and crucially—that migrant women have, today, become the domestic workers and care givers who make possible the maintenance of the heteronormative family structure as native-born European women enter the workforce in increasing numbers. In short, Muslim and non-Western migrant women have, in many ways, become the condition of possibility of what Farris calls “the reproduction of the material conditions of social reproduction” in the three European countries she examines.

This is a crucial insight, and to understand the gravity of the claim one has to follow the many strands informing Farris’ argument, which meticulously reveal the different but converging ways in which femocratic, right-wing nationalist and neoliberal actors adopt the rhetoric of women’s rights as they promote Islamophobia. A particularly provocative discussion, however, is her analysis of the way a number of European feminists and femocrats have formulated their advocacy of Muslim and non-Western migrant women. On the one hand, they adopt second-wave liberal and socialist feminists’ emphasis on the significance of waged-work in the public sphere for women’s emancipation; on the other hand, their advocacy campaigns are littered with racist assumptions about the need of non-Western women—and today, particularly Muslim women—to catch up with their Western sisters.

Thus, a number of white middle-class feminists and femocrats have actively endorsed neoliberal workforce policies that have channeled migrant women into domestic and care work, precisely the kinds of work from which Western feminists have attempted to liberate themselves for several generations. The ideological justification is that waged work—whatever it may be—is a necessary stage in women’s liberation. Farris calls this the teleological narrative of emancipation, which is predicated on a temporal distancing between western and non-western women.  By doing the work that European women do not want to do, Muslim and non-Western migrant women are cast as beginning to catch up with their more enlightened European sisters. Yet, in reality, these migrant women are providing the necessary care infrastructure so that their sisters can claim emancipation.

The Rise of Femonationalism thus highlights that precisely as gender equality increasingly becomes part of Western common sense—think of the #MeToo movement—and is being embraced by a range of unexpected actors, certain forms of feminism have been deployed to reproduce and reinforce racialized and class stratifications. The frame of Farris’s brilliant analysis of femonationalism in Europe can be readily expanded to the US and the UK, where various conservative actors have also embraced feminist themes: from Theresa May who, as Lynne Segal has underscored in her book Making Trouble, has insisted on her feminist credentials even as she has endorsed austerity policies that have disproportionately hurt poor women and women of color, to Ivanka Trump, who has published a bestselling how-to-succeed guide for women, which holds up work-family balance as its feminist ideal.

Family-work balance has indeed become a new feminist ideal for so-called aspirational and upwardly mobile women, and this ideal is engendering a new model of emancipated womanhood in the Anglo-American world: a professional woman able to balance a successful career with a satisfying family life. This ideal has circulated widely in a range of key cultural sites: from the popular television series, “The Good Wife” through Sheryl Sandberg’s New York Times bestselling, Lean In, to Anne Marie Slaughter’s “Why Women Still Can’t Have It All” and her more recent sequel Unfinished Business.  All of these, albeit in different ways, uphold work-family balance as their feminist ideal, while neglecting the issues that have historically preoccupied feminists: i.e., equality, liberation, and social justice. This is not totally surprising considering that the success of privileged women, particularly in the professional world, very often rests on the underpaid, precarious and exploitative work of other women who are less privileged.  Indeed, the reality is that most often, women of color, poor and immigrant women in the US and in the UK, just like the Muslim and non-Western women Farris focuses on, serve as the unacknowledged domestic and care-workers who enable professional women to strive towards “balance” in their lives.

In this way, In the Name of Women’s Rights provides us not only with the political economic framework for exposing the underbelly of this new kind of convergence around Islamophobia in the name of women’s rights in Europe, but it also helps us think about how neoliberal feminism in the US operates through a splitting of female subjectivity: the worthy balanced feminist subject—people like Facebook’s Sheryl Sandberg and Ivanka Trump—and the “unworthy” dispensable female “other” who performs most of the reproductive and care work.  Similar to the effects of femonationalim that Farris tracks, this entanglement between feminist themes and neoliberalism in the US forsakes less privileged women by creating worthy and less worthy female subjects while simultaneously facilitating the creation of new and intensified forms of racialized and class-stratified gender exploitation.

Farris’ book consequently underscores that feminism and feminist themes can always potentially be unmoored from their emancipatory roots. Feminists of color and postcolonial feminists have long underscored that certain strands of feminism have resulted in violent exclusions, while often buttressing imperialist and racist projects. Yet, it is crucial to remember in this context that even classic liberal feminism, arguably the least radical of all feminisms, conceived itself and situated itself as oppositional, offering a critique of dominant society by revealing the gendered contradictions from within liberalism’s proclamation of universal equality. Today, by contrast, the ways in which feminist discourse have been taken up by various mainstream, neoliberal, and conservative actors across the globe is helping to defang feminism of its oppositional potential. As political theorists Nicola Perugini and Neve Gordon highlight in their book The Human Right to Dominate, discourses traditionally associated with emancipation and social justice can (always) be appropriated and mobilized for purposes of domination. And since feminism has no absolute essence or fixed meaning, but, rather, emerges within particular historical political, social and cultural landscapes, it can (always) lend itself to projects of subjugation and domination.

All of which begs the question of how we might continue to reorient and reclaim feminism as part of a wide social justice agenda. Although this question seems particularly urgent given the current political climate and the growing momentum of the #MeToo and #TimesUp movements, unfortunately Farris does not provide us with any answers. Yet, through her careful analysis of the political economic dimensions of femonationalism, certain elements of our contemporary landscape are illuminated with startling and disturbing clarity.