Siege and resistance in Gaza: an interview with Toufic Haddad 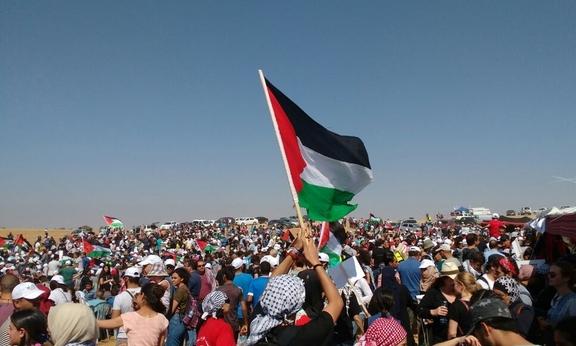 For more than 10 weeks, Palestinians have gathered in protest every Friday at the Israeli-Gaza Strip buffer zone, located in the perimeter of the 1949 armistice lines. Called by organisers the Great March of Return, the mobilisations have demanded an end to the crippling Western state-Israeli economic and political blockade of the Gaza Strip and that families expelled for generations from their homelands be allowed to return.

In response, the Israeli military has unleashed waves of violence on unarmed demonstrators. At least 110 have been killed and more than 12,000 wounded since the protests began on 30 March, the bloodiest day occurring at demonstrations on 14 May commemorating the Nakba (catastrophe), the original ethnic cleansing of Palestinians in 1948, when the state of Israel was formed.

Toufic Haddad, an activist, academic and author of Palestine Ltd: Neoliberalism and Nationalism in the Occupied Territory, spoke to Omar Hassan about the meaning of the protests – and what next in the struggle for the liberation of Palestine.

What is the background to the protests?

The regime of control Israel imposes over Gaza is unprecedented globally, some academics calling it a “digital occupation”. Remote control machine guns and drones monitor and police this tiny territory, which is 360 square kilometres, while Gaza’s access regime is so sophisticated that Israel counts every calorie and controls every chemical compound that enters the territory.

It would be imprecise, however, to reduce the protests to purely humanitarian questions. Gaza has been under siege because the international community and Israel want to prevent an alternative political model emerging within Palestinian politics. Hamas has led this alternative political project, and could again legitimately take power if elections took place.

But the issue is far larger than Hamas.

The Gaza Strip exists only because of the 1948 war. It is a rump territory where the victims of the Zionist campaign to ethnically cleanse Palestine ended up. Three-quarters of residents are refugees originating from the coastal and southern regions of Palestine. This is, demographically, the reverse of the West Bank, where refugees constitute only a quarter of the population.

The collective experience of displacement and harsh living conditions transformed Gaza into the crucible of Palestinian nationalism and the refugee return movement. The territory gave birth to the most significant vanguard political tendencies – from the Communist Party in the 1950s and 1960s, to Fatah in the late 1960s and Hamas and Islamic Jihad more recently.

The protests are the latest incarnation of these dynamics. We are witnessing yet another popular uprising launched around all the historical issues of the Palestinian movement (for return, self-determination, liberation etc.), and seeing all the new means that Israel and the international “community” have used to try to control and subvert Palestinian rights.

There is yet another important factor. Hamas, which won the 2006 elections [for the Palestinian Legislative Council] and attempted to reform the Palestinian national movement through the Palestinian Authority’s state-like institutions, eventually concluded that Gaza is ungovernable within existing constraints.

Self-governance – the crowning achievement of the Oslo Accords signed in the 1990s – became a way to alleviate Israel from the most “burdensome” elements of its occupation, while leaving it in ultimate control.

Hamas is abandoning civil governance and service provision because it understands, correctly, that it is a trap. The Palestinian Authority cannot manage Gaza and its contradictions without sovereignty and freedom of movement and goods.

When we add that the Fatah government in Ramallah, in the occupied West Bank, has cut spending on Gaza in recent years to pressure Hamas, we see that the protests are both a popular rejection of the occupation, the siege and the political crisis of Palestinian politics, and a way for Hamas to kick the “problem” of Gaza back to its rightful place – Israel and the international community, which are the main parties responsible for the perpetuation of the problem of Palestine for 70 years.

Who is leading the new movement?

With Hamas’ decision to abstain from governance, the path was opened for popular forces, and particularly a younger generation of activists, to take the initiative and see what could be done to change the situation.

Having said this, the traditional structures of the Palestinian national movement – the Palestine Liberation Organisation factions, and Hamas and Islamic Jihad – have gathered around the new mobilisations and their organic leadership to form the Higher Committee for the Great March of Return, which oversees the movement and protests. So it is a combination of new and old actors, experimenting with new and old tactics.

Hamas is still the dominant political player in Gaza, and its ability to mobilise forces is unmatched there. Its decision to abstain from governance essentially green-lighted its members to join popular mobilisations, providing numerical and logistical weight. This should not be confused with Hamas being the organisers of the demonstrations. Hamas is an organic actor in Gaza, and it is and will be a part of any mobilisation against the occupation there – whether it initiates these movements or follows them.

The base of the movement comprises what can be termed “the Oslo generation”. These are youth, mainly up to 30 years old, who grew up in Gaza during the Oslo years, who have never left the Gaza Strip and had minimal opportunities for a decent living.

Remember that Oslo was a cover for Israel to implement apartheid. Israel used the peace process to impose “closure” on the West Bank and Gaza to pen Palestinians in, particularly Gaza residents, and to take their lands.

The majority of Gaza’s workers used to work inside the Israeli labour market, and almost everyone was thrown out of work and imprisoned in the economically unsustainable Gaza Strip because of “peace”. A fence was built to hermetically seal the area in 1995 – at the height of the peace process – seven years before Israel built its apartheid wall across the West Bank.

So youth in Gaza have grown up isolated from the rest of the world, without opportunities for normal living, with a historical understanding of their refugee status and its causes and with the dashed hopes of the peace process.

Their parents would have witnessed or participated in the first (1987) Intifada (uprising), but have since witnessed the drastic deterioration of life quality because of the “peace process”. These older people have also been protesting because the siege means that they cannot take care of their families; it is crushing new and old generations alike.

An Arabic news correspondent went to the buffer zone where the demonstrations were taking place and interviewed an elderly woman there. He joked that most women of her generation would be at home making bread, and asked her what she was doing. With cold resolve, she responded, “My husband has been killed, two of my sons have been killed, another is in a wheelchair, and I don’t care if a bullet hits me through the forehead”.

People feel they have little to lose. Non-action is a form of certain slow death. Under these conditions, why not risk an active/fast death if there is at least a chance something can change?

Protests in the West Bank seem to have been more subdued. Is there a reason for this?

Israel has different interests in different parts of historic Palestine and therefore implements different strategies to realise its goals.

Gaza is the most intense of the theatres because it is the least important for Zionist aspirations. Gaza is the territory that former Israeli prime minister Yitzhak Rabin – the Nobel Peace Prize winner – wished would “sink into the sea”.

But the West Bank is different. Israel has key strategic interests there: the territory is much larger and contains strategic high grounds, important water reserves and the historical sites important for the Zionist movement to assert its mythology of “returning the Jewish people to the land of Israel”.

This is why Israel used the peace process to “separate” from the Palestinians across the 1967 occupied territory, while investing in massive colony construction projects in the West Bank, tripling the number of settlers since 1993. Israel aims to annex these territories, uniting the conquests of 1948 with those of 1967.

In more recent times Israel and the Western states have tried to make the West Bank seem more prosperous compared to Gaza, to lessen the anti-Oslo political tendency manifested most coherently in Hamas.

The West Bank was given a carrot while Gaza was given the stick. But the logic of the arrangement was aimed at getting Palestinians to believe that resistance was futile. While there were nominal improvements to economic conditions in the West Bank after 2007, the situation remains unstable. In recent years, economic conditions have worsened, and there is a no less brutal occupation regime, albeit administered differently.

The West Bank is also more difficult to organise. Israel is on the ground there and daily enters Palestinian cities and towns to conduct arrest campaigns. This does not happen in Gaza, which helps resistance experience and leadership to accumulate.

Israel holds around 7,000 Palestinian prisoners; the overwhelming majority of these are the political leadership of the West Bank. If they could organise, the West Bank would look different. Israel well understands this.

On top of this is the dynamic of Fatah, and in particular the majority branch of the party, which is loyal to Abu Mazen [Palestinian president Mahmoud Abbas] and nominally in control of Palestinian governance in the West Bank.

As far as Fatah is concerned, the Palestinians have paid the price of armed resistance (winning recognition through it) while Palestinians should avoid a damaging frontal confrontation with Israel. Fatah believes this strategy will ultimately defeat Zionist ambitions because, if Palestinians survive and remain in Palestine, organised as self-identifying Palestinians, they will remain “the non-Jews” within the “Jewish democratic state” from an Israeli perspective. Fatah believes that this contradiction will eventually force either statehood or the collapse of Zionism.

Where do you see the Palestinian movement in the broader context of Middle Eastern politics?

Historically, Palestine has been touted as the “cause of the Arabs”. But it’s been obvious to most that this hasn’t been the case for decades, if it ever was. Palestinians have been left to their own fate, especially after Oslo. With the Arab uprisings of 2010-11, the limited support the cause received further deteriorated in light of local revolutionary dynamics becoming more important.

The Palestinian movement was fracturing internally around the same time, between the West Bank and Gaza, which created a crisis of representation and leadership. Popular forces across the Arab world remain in solidarity with Palestine. However, this solidarity cannot actualise in a context marked by the extreme counter-revolutionary forces and dynamics unleashed.

The counter-revolutionary waves unleashed have understandably preoccupied Arab revolutionary actors, further isolating the Palestinian theatre from its natural periphery. But this is temporary; it will not last indefinitely. Eventually revolutionary dynamics will reignite across the region because the old regimes have no answers to the questions the revolutions posed.

Meanwhile, we are witnessing unprecedented Arab state collusion with Israel – represented most vividly in Saudi-Israeli rapprochement, but also unprecedented Egyptian-Israeli collusion. Egypt has even invited Israel to bomb the Sinai with its fleet of drones to squelch the local opposition movements there.

The Arab states seek to team up with Israel and the Trump administration to counter Iran – but also any perceived local opposition to their rule. These dynamics are debilitating for the Arab revolutionary currents, particularly without a larger progressive movement and network to sustain it.

The Middle East and Palestine feature within a central axis of world trade, energy and political conflicts. This means that any genuine democratic forces in the area must counter a substantial number of reactionary elements of the world order, with their local manifestation. The stakes in this respect couldn’t be higher.

A longer version of this edited transcript will be published in the forthcoming Marxist Left Review.