Posted by Editor on Wednesday, September 13, 2017 · Leave a Comment 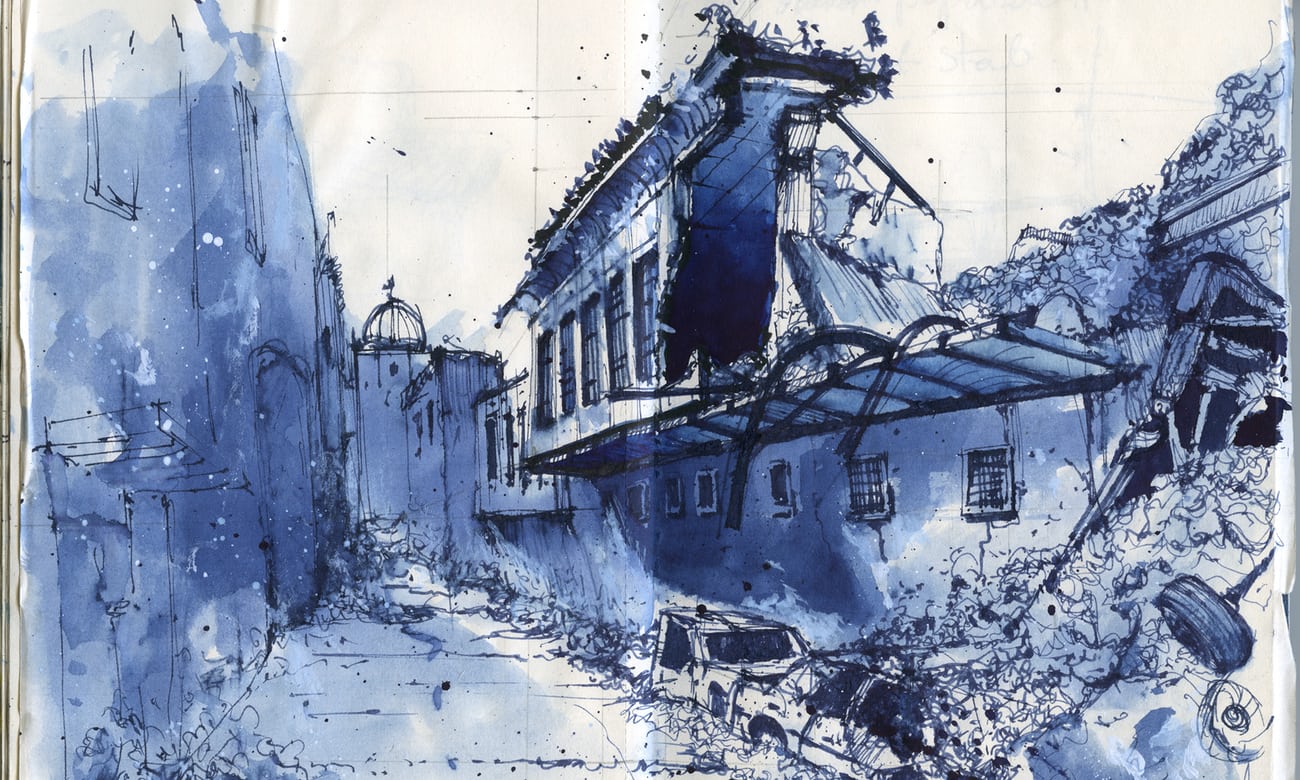 Posted on The Guardian/Observer on September 10, 2017

Guardian journalist Ghaith Abdul-Ahad’s drawings have helped him cope with reporting from the frontline. Now they will illustrate a book of his experiences.

Last July, as the Iraqi army was liberating Mosul after nine months of catastrophic fighting against Isis, the Guardian journalist Ghaith Abdul-Ahad found himself in a makeshift military post in the old city. The building was so badly damaged, it was hard to tell what it had been before – a shopping centre, perhaps, or a hotel. “The floor had collapsed so you had to walk on the joists,” he recalls. “Soldiers were sleeping there and manning positions with bodies rotting around them. There was faint Isis resistance from a couple of streets two blocks away. There were still airstrikes happening. You could hear snipers shooting.”

Outside, the old city lay in ruins. Abdul-Ahad had never witnessed a scene of such total devastation. “I’ve been covering wars for 14 years in Syria, Yemen, Iraq,” he says, “and I’ve never seen anything like the old city of Mosul. You don’t see streets any more. You can’t distinguish where the buildings stood. It’s all one sea of concrete and rubble.”

Abdul-Ahad works with a camera as well as a notebook: his vivid, nuanced dispatches for the Guardian are illustrated with his own photography, and in Mosul he also shot video footage for a documentary to accompany his report. But for the past couple of years he’s been using another medium to make sense of what he sees: a sketchbook with watercolours and pens. At the military post in Mosul, he noticed a pair of windows looking out on to the ruined city, which he had visited many times before Isis seized it in 2014, and was struck by the scene. He took a photograph as an aide-memoire and later, when his assignment in Mosul was over, he set about drawing it.

This process wasn’t entirely new to Abdul-Ahad. Before he became a journalist in 2004, he was an architect in Baghdad and making sketches was something he did all the time. “I went into architecture because I loved drawing,” he says.

It was the US-led invasion of Iraq in 2003 that triggered his move into journalism. After the American tanks rolled into Baghdad, Abdul-Ahad worked first as a translator for the Guardian, then as a fixer for the New York Times. A year later, he became the Guardian’s Middle East correspondent. As his new career took off – he won a British press award in 2008 and the Orwell prize for journalism in 2014 – his drawing stalled. “My head went somewhere else,” he says, “and I couldn’t actually hold a pen for eight or nine years.”

Now his enthusiasm has returned. The impetus came from Jamie Wilson, head of international news at the Guardian, who noticed Abdul-Ahad doodling at a conference and commissioned him to write and sketch a story about Syrian refugees in Turkey – it ran in April 2016.

Before long, Abdul-Ahad was taking his sketchbook with him on assignments, though he’s quick to emphasise that he doesn’t draw while bullets are flying. “I wouldn’t take my watercolours and sit in the middle of a war zone,” he says. “That would be crazy.” Rather, he does quick pen-on-paper sketches during quieter moments and elaborates them, using watercolours, when he’s back in his hotel room or at home in Istanbul.

This serves several purposes, he tells me. “I realised that if I start sketching a scene when I’m on the ground, later, when I come to write it, I have it better in my mind than if I’d taken a photograph.”

He likens the difference between sketching a scene and photographing it to taking notes in an interview versus using a voice recorder. “Recording the conversation, you lose focus. I don’t pay much attention to what the person is saying because I know I’m recording everything.” It’s the same with cameras, he says: you observe your surroundings less if you know you can replay the scene on your laptop later on.

The boxes upon boxes of notebooks and sketchpads piled up in Abdul-Ahad’s home are coming in handy now – he’s in the process of writing a book about his experiences as a reporter, mostly focusing on assignments in Iraq, Syria and Yemen. Many of his sketches – he estimates he’s done more than 100 – will be reproduced in the book.

Drawing has another benefit too: it helps him deal with the traumatic situations he has encountered around the Middle East (he has been detained twice as a reporter, once by the Taliban in Afghanistan in 2010, and a second time by Gaddafi loyalists during the 2011 conflict in Libya). “When you’re in a difficult place, a war zone, I find drawing such an amazing therapeutic exercise,” he says. “It’s a process of cleansing. It is so relaxing.”

I mention that I find his drawings, even those scenes of terrible destruction, strangely beautiful to behold.

“When you look at the ruins of these beautiful buildings in Yemen – 500-year-old houses sheared in half, the insides spilling into the rubble – beauty becomes a very difficult word,” he says. “But I guess it’s beautiful in its own way: it definitely touches you, it definitely talks to you.”

It’s notable that the majority of Abdul-Ahad’s sketches are cityscapes, focusing on buildings in various stages of disrepair and ruin. If human beings feature at all, they are often reduced to a blur. “It’s mostly the architect in me trying to crawl back,” he admits.

But these are very different prospects confronting him now. “When you draw as an architect, you want to have these clean edges and lines that are pure. Then you go into journalism and you realise that in reality there are no pure and simple lines, especially in the Middle East.

“Even if the buildings are not destroyed, they are a composite of different layers and metal sheets on top of bricks, and when they are destroyed they are even worse, the organic form of a concrete building spilling and twisting.”

Is the old architect in him wondering, how do we sort this out?

“Of course,” he says. “I remember once I was with the Iraqi army on the outskirts of Mosul. Every building was a military target. As a journalist, I was trying to record what was going on. But then, going through these urban tunnels with the soldiers, you notice, oh my God this is an old Ottoman courtyard with beautiful arches and it’s falling apart. Or, this is an old church or mosque and it’s destroyed. I can’t describe to you standing on the ruins of this minaret in old Mosul, 1,000 years old and it’s a pile of bricks in front of me.”

He pauses. “Of course, who cares about the buildings when people are dying? But then there’s this other person inside you looking at these scenes and wondering, who is going to rebuild these buildings?”