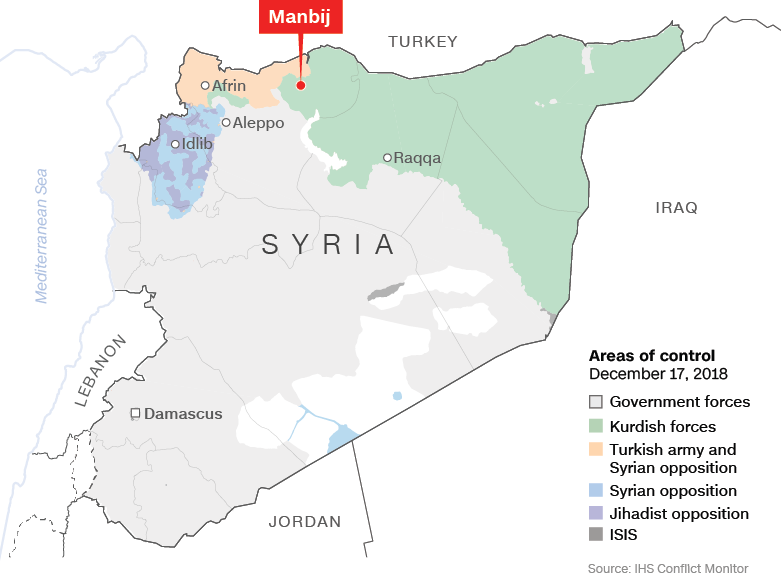 Syria’s army said Friday it had entered the northern city of Manbij for the first time in years after Kurdish fighters called on Syrian forces to protect the area from the threat of a Turkish attack. Syria’s military command announced in a televised statement that its troops had raised the Syrian flag in Manbij following what it described as an appeal by people in the area. The US military rejected the Syrian claims Friday, describing them as “incorrect.” One US official with knowledge of the situation told CNN that there were no Syrian regime forces Friday in Manbij, but that the US assessment was that Syrian troops were moving closer to the city. The United States has Special Forces on the ground in the area, according to the US official. One Manbij resident told CNN he had seen a US patrol near a mosque Friday in the city center, and a Syrian opposition group told CNN that US forces still controlled Manbij. Syria’s announcement came after the Kurdish People’s Protection Units, or YPG, issued a statement urging President Bashar al-Assad’s forces to “assert control over the areas our forces have withdrawn from, in particular Manbij, and to protect these areas against a Turkish invasion.”The YPG is the backbone of the Syrian Democratic Forces, the Kurdish-led fighting force that is the main US partner on the ground in the battle against ISIS. The development comes more than a week after President Donald Trump blindsided allies in the region by announcing that US troops were withdrawing from Syria and declaring that the war against ISIS had been won. US Defense Secretary James Mattis resigned last week in disagreement over Trump’s decision, which could leave the Syrian Kurds, whom the United States has assisted and armed, at risk from both ISIS and Turkey. The United States has about 2,000 troops in Syria, and no specific date for their withdrawal has been given. John Bolton, the US national security adviser, said in a tweet Friday that he will be visiting Israel and Turkey next month to discuss “security challenges” amid the withdrawal.”Looking forward to visiting Israel & Turkey in January. We will discuss our continued work confronting security challenges facing allies & partners in the region, including the next phase of the fight against ISIS, as the U.S. begins to bring troops home from Syria,” he said.

US forces’ vehicles and structures are seen Wednesday on the outskirts of Manbij, Syria.Turkey, a NATO member, also has forces in the area and considers the Syrian Kurds a terrorist group linked to a Kurdish insurgency inside its country.Turkish President Recep Tayyip Erdogan expressed skepticism over the Syrian claims Friday, saying he had not heard “anything conclusive” from intelligence or Russia, a key backer of Assad.”We know that Syria is in a psychological action toward Manbij, we know they are waving their flags, but there is nothing conclusive or certain,” Erdogan told journalists Friday. He reiterated that Turkey’s goal in Syria was for “the terror organizations to leave. If they leave, we will have nothing to do there.”Russian government spokesman Dmitry Peskov welcomed the developments Friday, describing them as “a positive step toward stabilization of the situation.””Expansion of the government control zone is a positive trend,” Peskov said, adding that Moscow and Ankara would discuss the situation in Syria in a ministerial meeting Saturday.

Trump is leaving the fight against ISIS (and influence in the Middle East) to Russia and IranKurdish forces have maintained control over swaths of northern Syria over the past few years. But in January, Turkey launched an operation targeting Kurdish groups in northwest Syria to clear the border area of militias it considers to be terrorist organizations.Clashes between the Turkish military and Syrian Democratic Forces have intermittently plagued and delayed the final operations against ISIS.The YPG said Friday that following its withdrawal from Manbij, it would be “focusing on the fight against ISIS on all fronts in the east of the Euphrates.”The YPG had some small skirmishes with Syrian government forces earlier in the war, but it allowed the Syrian military to maintain footholds in its areas of control.