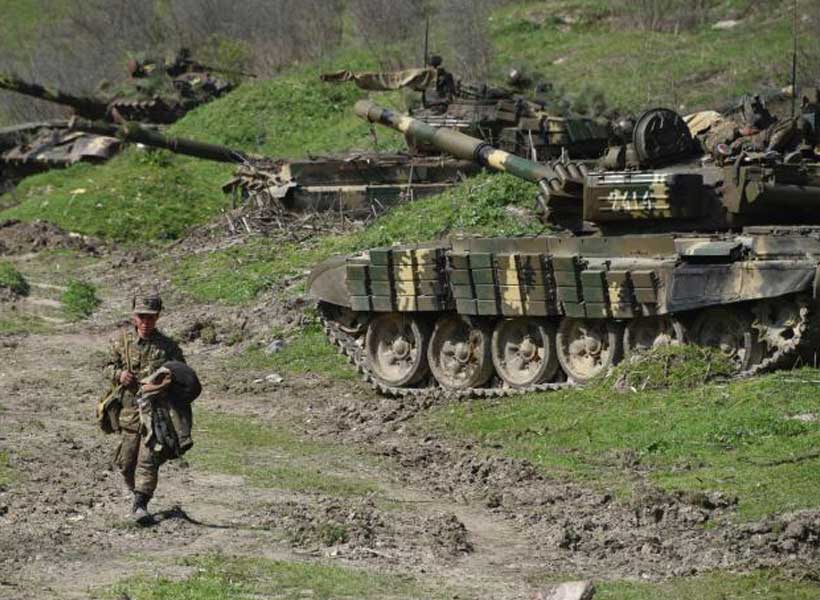 Desperate to help his family displaced by Syria’s war, pro-Turkey rebel fighter Abu Ahmad is waiting to be deployed to Azerbaijan, hoping to earn almost 80 times his current salary.

“I signed up to fight more than a week ago to go to Azerbaijan… in exchange for $2,000 a month,” the 26-year-old told AFP via phone, using a pseudonym for his safety.

Baku and Yerevan, the capital cities of Azerbaijan and Armenia respectively, have traded accusations over which side initiated the latest round of fighting. Almost 200 deaths have been reported, making it the deadliest round since the all-out war.

Turkey is backing its longtime ally Baku in the clashes and has been accused by Armenia of sending its Syrian proxies to bolster Azerbaijani troops, allegations backed by France, despite Azeri denials.

Turkey supports Azerbaijan, not least because of cultural and linguistic ties between the two countries. Ankara was the first to recognise Azerbaijan after its independence from the Soviet Union in 1991.

On the other hand, Turkey has strained relations with Armenia, rooted in Armenian genocide accusations against the Ottoman empire. The two countries have no official diplomatic relations.

During the war between Armenia and Azerbaijan over Nagorno-Karabakh in 1993, Turkey closed its borders with Armenia in support for Baku.

Turkish President Recep Tayyib Erdogan and senior officials in his government have expressed their country’s support for Baku following the recent escalation.

‘We have no other option’

AFP spoke to Syrian opposition fighters from Aleppo and Idlib preparing to set off for the Caucasus, and one already in the conflict zone.

From a camp for the displaced in the north of Aleppo, a province controlled by Turkey-backed rebels, Abu Ahmad said he was heading to Karabakh hoping to better provide for his wife and children.

“We lost our villages and our homes, and we have nothing left to eat,” said Abu Ahmad, who has been a rebel fighter for five years.

“I’m waiting for my turn to go to Azerbaijan to save up some money, to come back and start up some sort of business,” he said.

Abu Ahmad and his family had fled their home earlier this year during a devastating onslaught by Russia-backed government forces, before a ceasefire in March stemmed the fighting.

He said his income had been reduced to a pittance now the battles had largely stopped, receiving just 200 Turkish lira (around $25) from his rebel group last month.

He said it was not enough to support his family in a country ravaged by nine years of war, and where food prices had soared in recent months.

With reports of Syrians killed in Nagorno-Karabakh, Abu Ahmad realises he is taking a risk.

“We have no other option,” he said. “We’ve reached the point where we’re ready to sacrifice ourselves to provide for our children.”

The Syrian Observatory for Human Rights says 1,200 Syrian fighters have already headed to Azerbaijan via Turkey, and hundreds more are preparing to follow suit.

The fighters – from pro-Ankara armed opposition groups – were being promised a monthly salary of between $1,500 and $2,000, the Britain-based war monitor said. The first among them arrived in Azerbaijan before the fighting started, thinking they would be guarding oil fields and the frontier, it said.

A fighter from the town of Atareb in Aleppo province told AFP that he was on the frontline.

“Yes, I am in Azerbaijan,” he texted, but declined to give any more details.

A source in his hometown said he was in a unit whose commander, Mohammad Shaaban, had died.

Shaaban was among four Syrians whose pictures were shared on social media after they were reported to have been killed.

‘Not enough to buy bread’

The Observatory said at least 64 pro-Turkey Syrian fighters had died in the clashes since Sunday. The relatives of three of them confirmed to AFP they had been killed.

They were among the 1,200 combatants from pro-Ankara Syrian factions that Turkey has sent to fight for the Azeris since last week, the Syrian Observatory for Human Rights said, updating its earlier figure of 850. Turkey backs Azerbaijan against Armenian ‘invasion’: Erdogan Read More »

At least 36 of them have been killed in clashes in the past 48 hours alone, the Observatory added.

French President Emmanuel Macron on Friday demanded that Turkey explained what he said was the arrival of jihadist fighters in Azerbaijan.

Intelligence reports had established that 300 Syrian fighters drawn from “jihadist groups” from the Syrian city of Aleppo had passed through Gaziantep in Turkey en route for Azerbaijan, Macron said.

In a statement on Saturday, the Syrian foreign ministry warned of “blatant Turkish interference” in the conflict.

“It aims to inflame the situation in a manner that is consistent with the Turkish regime’s behaviour in more than one country, where it has created tension and fuelled the fire of sedition,” said the statement, carried by the official SANA news agency.

Turkey has admitted to sending Syrian fighters to conflict-wracked Libya as part of its support since late last year to the UN-backed government in Tripoli, but has not officially commented on Syrian mercenaries being sent to Azerbaijan. Baku says Armenians from the diaspora have enlisted on the side of the separatists.

In Syria’s northwestern province of Idlib, opposition fighter Abu Adnan, 38, however, said he had been approached about signing up as a combatant in the Caucasus.

“Our turn didn’t come to go to Libya, so we were told to prepare to head to Azerbaijan,” he said using a fake name for fear of repercussions.

Abu Adnan said he arrived in the country’s north in 2017, having fled his hometown. He joined a rebel group and had moved from one town to the next with his family until ending up in a camp.

“Here we’re posted on the front for 200 Turkish lira and it’s not enough to buy bread, but over there we do it for $1,500,” he said. But he said money wasn’t the only reason.

“We stand with our ally Turkey because it stood with us against Russia and is fighting for Syria, and we need to stand with it at all times,” he said.

“If Turkey loses any battle, it will become under pressure and forced to surrender our areas to the regime. And then we’ll never, ever go home.”