Posted by Editor on Thursday, February 9, 2017 · Leave a Comment 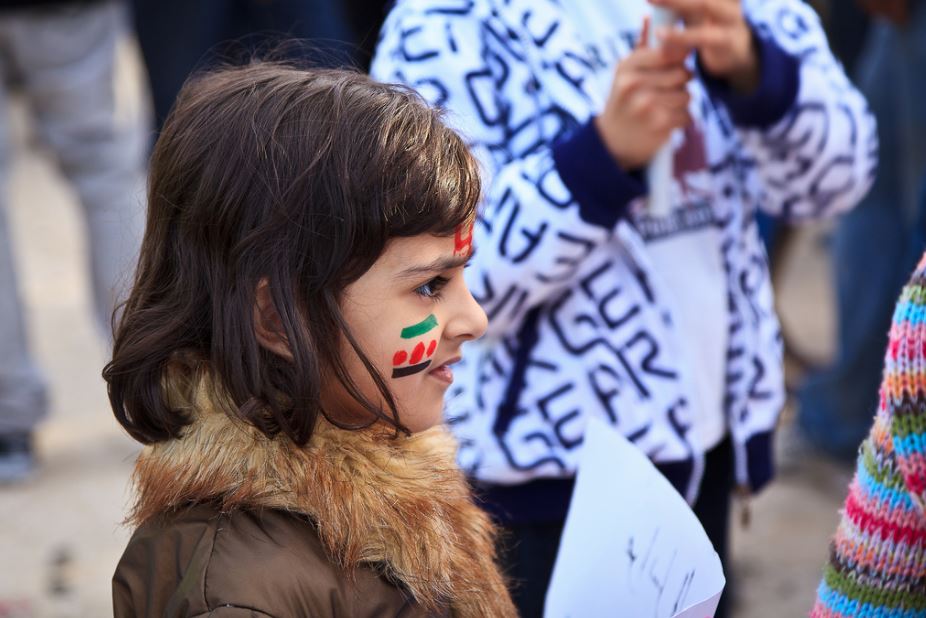 In a few weeks, many Syrians, Syrian-Palestinians, and their supporters will be commemorating the sixth anniversary of the Syrian uprising. Amid ongoing diplomatic talks that expose just how much of Syria’s future is in the control of outside powers, it’s an important time to assess the challenges and debates facing ordinary Syrians.

Razan Ghazzawi participated in the 2011 protests in Syria and was detained twice by the Assadist state; the threat of a third detention forced her to escape the country. Still, in 2013 she returned to live in Kafranbel, a town outside government control, before entering the PhD program at the University of Sussex. Here, Ghazzawi interviews American grassroots activist Ramah Kudaimi on questions of grassroots activism, transnational solidarity, American politics, and the Left on Syria. They discuss the need to rethink mobilization and advocacy strategies in the service of people’s protection, justice, and accountability in Syria.

Trump’s first weeks in office have been eventful, as he has signed extremely worrying executive orders. Two in particular will have an immediate impact on Syria: the so-called “Muslim ban,” which includes an indefinite denial of Syrian refugees, and the one calling on the Pentagon to present a plan to escalate the war against ISIS. What does this signal in terms of US policy towards Syria moving forward?

There was a lot of fear from communities across the globe following Trump’s election and all that fear has been proven legitimate as these racist, right-wing orders are being signed. The administration continuing to peddle the Islamophobic narrative that Syrian refugees are terrorists combined with its eagerness to expand the “war on terror” in partnership with Putin does not bode well for ending the war in Syria, let alone in a manner that guarantees freedom and dignity for the Syrian people, especially for refugees being able to return home.

There is going to be a lot more bloodshed and while under Obama there was for a while at least a pretense that the US government supported the revolution, that is not at all the case with Trump. His priority is to defeat “radical Islamic terrorism” as he declared during his inaugural speech and he will work with anyone to do that, including Assad, who claims to have the same priority. So the US will continue the same course of war on terror strikes in Syria but much more intensely and in a manner much more openly supportive of Assad.

The Assadist state media and their apologists at the end of 2016 depicted Aleppo as a symbol for “victory” against the “terrorists.” How do you think we should see Aleppo, especially considering that the area of Wadi Barada is currently under heavy state bombardment, as well?

What happened in Aleppo has been years in the making. The regime and its backers have been using this tactic of siege and mass expulsion of opposition fighters and civilians to regain control with other parts of the country like Homs and Daraya. The United States has for a while given up pretending it supports the aspirations of the Syrian people to live free from an oppressive regime and has stepped aside to let Russia and Iran do what they want in Syria.

And we are now in an era of warfare in which there is not even an attempt to abide by any basic international humanitarian law standards, as evidenced by for example the increased number of attacks on hospitals not only in Syria, but in Yemen and Afghanistan as well, and the continued use of chemical weapons by Assad in Syria with no accountability.

We saw all these realities come together in Aleppo. It is quite damning of the international community that what saved Syrians from mass killing in Aleppo was mass expulsion from their homes, which itself is a war crime. So one war crime is used to alleviate people from facing another war crime.

The atrocities that took place in Aleppo and the complete lack of any accountability have given Assad and his allies the green light to continue these tactics to regain control across the country and already we are seeing the result of this in Wadi Barada. The immediate future does not bode well for Syrians as it seems like the regime is going to be staying in power for the time being and the entrenched role of Assad’s backers in determining the future of Syria.