Tehran’s little secret: Cafe where disability is no barrier to talent – and serving tea 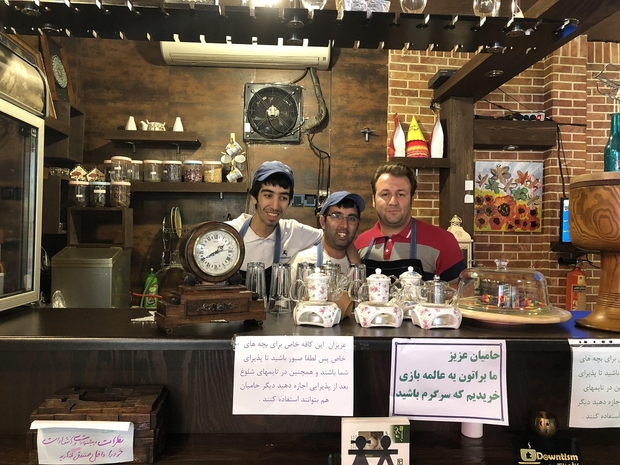 TAs Mehdi Khakyan’s hands move skilfully across the piano keys, the soft chatter in the room subsides to hone in on the melody of a well-loved Iranian classic, Sultan-e-Ghalbha.

The live music creates a warm ambience and people are excited to be in Cafe Downtism.

Salar Mohammady, the manager, trainer and head barista, is managing orders behind the coffee bar, whilst 19-year-old Ariya Azad, wearing a beaming smile, carefully serves steaming, aromatic cups of rose-infused tea to a table of customers.

From the outside, this scene could be mistaken for being typical of the cafes in Tehran’s affluent north, but Cafe Downtism is far from it.

Mehdi Khakyan plays the piano at Downtism cafe in Tehran, where the musical talents of staff are encouraged (MEE/Sahar Esfandiari)

Located in a quiet mall in the otherwise busy area of Vanak in the north of the capital, Cafe Downtism opened its doors in May 2018, and in a short time, it has captured the hearts and minds of many Iranians.

As the name suggests, the day-to-day running of this small cafe is handled almost exclusively by young people with disabilities such as autism and Down’s syndrome. They carry out an array of tasks ranging from taking and serving orders, to playing gentle piano music for customers.Pay for staff differs month to month, as all of the money gathered in each month is first used to pay bills, rent, and upfront costs. Any profit after this is split equally amongst the employees.  Most employees are supported by their families.

The initial idea for Cafe Downtism came from Aylin Agahi, a 37-year-old musician and teacher with 17 years of experience working with people with autism and Down’s syndrome.

In her work as a private music teacher to children and young people, Agahi has always encouraged her students to take part in professional concerts and competitions. However, she noticed that they would get increasingly upset and unsettled in the run-up to a show.

“I discovered that they were feeling anxious because they were so afraid of not getting through to the next round of the shows. It wasn’t so much about the music or the concert, it was the interaction with other people that made them so happy.

“They enjoyed being encouraged and cheered for by the audience. They loved showing their talents to the world, but most of all they enjoyed being seen. It was after this that I decided to do something for them.”

The facade of the Downtism cafe in Tehran (MEE/Sahar Esfandiari)

According to figures, in 2017 one out of every 150 babies was born with autism in Iran. Although this figure is not as high as other countries when compared to global numbers, it amounts to what is a sizable and vulnerable section of Iranian society, justifying a real need for institutions and establishments such as Cafe Downtism that cater to their needs.

In January last year, Iran’s then health minister, Hassan Qazizadeh-Hashemi, announced that some 30,000 children are born with Down syndrome per 1.5 million births in the country, or one in 50.

The customers are wonderful. They bear with us if the service is delayed or the quality is lower. They are always understanding of the circumstances and they support us

With this in mind, the importance of the cafe goes far beyond financial support and employment. The cafe combats prejudice and discrimination and gives valuable members of society a chance to contribute their talents.

‘These guys learn so fast’

Mohammady is a trained barista who, aside from managing the cafe, is training the staff in how to run it themselves – everything from how to make tea and coffee to how to welcome customers, serve drinks, clean tables, prepare bills and so on.

The working day is split into morning and afternoon shifts. On a given day, there are approximately 10-12 people working, with a total of 38 people currently employed at the cafe.

Mehdi Khakyan, 31, and Ariya Azad, 19, were diagnosed with autism at the age of three and four. Smart, young, and polite, both men are eager to work hard and show passion in what they do.

“These guys learn so fast,” says Mohammady. “They help me a lot. Mr Mehdi is a professional at cheese and crackers. He’s great. They are so talented and more importantly, they really want to learn.”

Azad happily chimes in at this remark and speaks of his own progress. “I’m learning new things,” he says, “like how to wash dishes and clean the doors.”

Agahi tells MEE that financial difficulties have been the cafe’s biggest setback since the idea for its opening first emerged.

The start-up costs amounted to around 70 million rials ($1,668) and included rent for space, furniture and equipment for making coffee and drinks. The cafe is still waiting for a possible grant from the Iranian Social Welfare Organisation, which has so far not been forthcoming following some initial interest in supporting the project.

The organisation is the main government agency tasked with providing services to people with disabilities. In HRW’s report, however, some of the people with disabilities interviewed said that on occasion the employees of the agency did not provide essential information about services and equipment available to them, and that its procedures were lengthy and complex.

“When I first took my business plan to the Iranian Social Welfare Organisation, I told them that I wanted to open this cafe but needed some financial support, and they agreed to do so on the condition that I was open and vocal about their help,” she says. However, no funding has been pledged so far.

Instead, Agahi has personally funded large amounts of the costs herself, as well as borrowing money from 15 of the families of the children she has taught music to. They have been supportive and shared her hope that the cafe would benefit not only their own children but all young people and adults with autism and Down’s syndrome.

If this wasn’t difficult enough, the sudden drop in the value of the Iranian rial, exacerbated by the recent re-imposition of US sanctions, meant that fewer ordinary Iranians now have the luxury of spending their money on cafe excursions. The cafe’s costs have also increased, from their monthly rent to the raw materials they purchase for making coffee and tea in the cafe.

Another big obstacle for the cafe is its location, as it is hidden away on the top floor of a small and deserted mall named Ayneh Vanak. Unlike cafes located elsewhere in the city which stay open until 11pm or midnight, Cafe Downtism is forced to close before the mall closes at 9pm, limiting their customer intake on a daily basis.

They have also been prohibited from advertising the cafe at the entrance of the mall, which has made it almost impossible to attract new customers unless it is through advertising on social media or by word of mouth.

As is typical of many big cities, in Tehran any true sense of community is becoming hard to find. In today’s modern world of fast communication, there is often very little discourse or connection between servers and customers in cafes and restaurants.

However, at Cafe Downtism, staff are eager to connect with customers by engaging in conversation and going out of their way to ensure that everyone leaves with a smile on their face.

We want all people around Tehran, Iran and from around the world to come to us and see us, to see how we work

According to Mohammady, the clientele is very supportive and come with a genuine appreciation of the establishment. “The customers are wonderful. They bear with us if the service is delayed or the quality is lower. They are always understanding of the circumstances and they support us.”

Aside from a large variety of hot drinks and snacks available on the menu, the space is also used to showcase the talents and skills of staff.

Live piano music is played by Mehdi and other employees whenever there is a spare moment throughout the day, and an array of artworks painted by staff members decorate the cafe’s walls.

Handicrafts such as beaded jewellery and wall hangings are also available for sale, the profits of which all go towards paying the costs of running the cafe.

Music has formed an important part of the cafe from its inception, with the influence of Agahi and the musical talents of many of the employees. In addition to the piano, some also play the organ, and the tonbak, a traditional Iranian drum.

Unfortunately, Mohammady tells MEE that due to budget restrictions, not all of the instruments the staff can play are currently available at the cafe, but there is hope that one day all of them will have the opportunity to show their talents to the world.

Hopes for the future

In the future, the team hopes to find a bigger and more open space, expand facilities, and increase their capacity to serve more customers. Financially this dream is a long way off, with no plans currently set in motion to do so.

“We would love to get to the point where we can set up different branches elsewhere in Tehran, in other cities like Karaj and Qazvin – for these guys, for their future so that they can be self-sufficient,” Mohammady says.

According to Mohammady and Agahi, people with special needs are often secluded from society in Iran, since families fear that the public will treat them with prejudice.

However, the irony is that the more they are secluded, the more misunderstanding and prejudice this breeds. It is this isolation from the rest of society that the cafe aims to combat.

Mehdi is enthusiastic about working here and is looking forward to the future and the possibility of getting more experience.

“We want people to support us,” he says. “We want all people around Tehran, Iran and from around the world to come to us and see us, to see how we work.”

Despite the odds working against this small cafe, the team continue to work hard, serving customers with much care and attention. They want to show the world they are more than able to give something unique to their community.