The new Middle East revolutionaries share this one fatal flaw 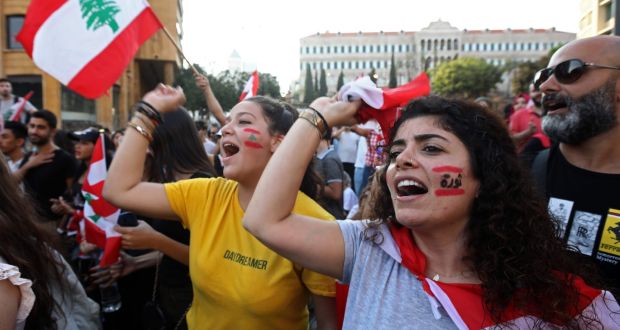 Revolutions are like electricity. An electric shock of the most unexpected kind. The victims think at first it must be a powerful wasp sting. Then they realise the entire house in which they live has been electrocuted.

They react with howls of pain, promises to move home or to rewire the entire place, to protect the occupants. But once they realise that the electricity can be tamed – however ruthlessly – and, most important of all, that it has no controlling element, they begin to relax. It was all a faulty connection, they say to themselves. A few tough and well-trained electricians can deal with this rogue power surge.

That’s what’s happening in Iraq and Lebanon and Algeria. In Baghdad and Kerbala, in Beirut and in the city of Algiers – and, once again, in miniature and briefly, in Cairo. The young and the educated demanded an end not just to corruption but to sectarianism, to confessionalism, to religious-based mafia governments of immense wealth, arrogance and power.

But they have all made the same mistake that millions of Egyptians made in 2011: they have no leadership, no recognisable faces of integrity. And – the greatest tragedy of all – they don’t seem to be interested in finding any.

Bring down the regime, the government, the masters of deceit, the cancerous centres of power: that is their only cry. The Lebanese protestors, in their hundreds of thousands, are demanding a new constitution, an end to the confessional system of government – and to abject poverty. They are absolutely right; but then they stop. The cheats must leave forever. Whether these men – for they are all men, of course – are nepotistic, thieving or rely on armed power, their departure is enough for those who must inherit the future of Lebanon.

It’s as if the revolutionaries of Beirut, Baghdad and Algiers are too pure to dip their fingers in the glue of political power, their goodness too heavenly to be contaminated by the dirt of politics, their demands too spiritual to be touched by the everyday hard work of future governance that they believe their courage alone will ensure victory.

This is nonsense. Without leadership, they will be overwhelmed.

This is nonsense. Without leadership, they will be overwhelmed.

The elites and kings who govern the Arab world have sharp claws. They will offer derisory concessions: a promised end to corruption, the abolition of newly imposed taxes, a few ministerial resignations. They will also praise the revolutionaries. They will describe them as “the real voice of the people” and “true patriots” – though if the revolutionaries then persist they will be called “unpatriotic” and, inevitably, traitors who are doing the work of “foreign powers”. The resigning government will even offer fresh elections – with, of course, the same old and infamous faces leaving and returning on the confessional roundabout when the poll is held.

Not all these new revolutions are the same. In Algeria, a newly educated (and unemployed) class have grown weary and hopeless beneath the pseudo-democracy of the army. They got rid of the comatose Abdelaziz Bouteflika, only to be confronted by a new army leader and the famous promise of elections in December (on the same day, by chance, that Downing Street’s Toytown version of an elitist leader intends to divide the British people) – a preposterous offer since the newly elected president will continue to nestle in the arms of the corrupt generals whose bank accounts are currently active in France and Switzerland.

Algeria is owned by the army. It’s what in the Middle East I sometimes call an “econmil”: an economy virtually embedded inside the barracks, an economic-military complex, which means that patriotism and personal wealth are regarded by the leadership as indivisible. Their opponents are poor. They want for food in their oil-soaked, immensely profitable country. But that’s not how the generals see things. When the people demand change, they are trying to take the army’s money away.

The system is very similar to al-Sisi’s army in Egypt – another “econmil”, with its control of real estate, shopping malls, banks. The US pays more than 50 per cent of Egypt’s defence budget but the country’s tanks and fighter jets are not intended to be used against Egypt’s traditional enemies. Their duty is to protect Israel, to crush Islamism, to maintain “stability” for America’s allies and for its investments. The millions of protestors of 2011, disillusioned by the shallow, frightening months of Morsi, were ready to be re-infantilised by the army. They had no leaders to warn them of their folly.

Egypt’s television journalists, so brave on the frontlines, reappeared on the day of Sisi’s coup, presenting their shows in military costume. The opposition became “terrorists” – which is what Iraqi and Lebanese politicians are now beginning to call their young political opponents – and the few newly named revolutionaries who might have created a new Egypt were quickly thrown into the darkness of the Tora prison complex.

When hundreds of infinitely brave Egyptian men and women dared to recreate their protests in Cairo this month, they were snatched off the streets.

When hundreds of infinitely brave Egyptian men and women dared to recreate their protests in Cairo this month, they were snatched off the streets.

And who are the new leaders in Iraq? There are none that we know of. Thus the tired, poor and huddles masses who want to own their own country and taken it away from the pompous ministers who have mismanaged its wealth are now treated as a security risk, a mob, an anarchic rabble (for sure, in the pay of the usual “foreign agents”) and whose demands must now be shot down with live fire.

Iraq has given more martyrs in its current revolution – 200 and climbing – than other Arab nations. And now the militias have arrived to suppress them; 18 murdered Shia protestors in Karbala were victims of a Shia militia – its Iranian provenance, much publicised in the west, still unclear – proving that those who were prepared to fight and die against Iraq’s American occupation are nonetheless still prepared to gun down their co-religionists in order to crush an Iraqi revolution.

In Lebanon, this phenomenon is less bloody but potentially even more shameful.

When hundreds of thousands of protestors in central Beirut are assaulted by gangs of Hezbollah members belonging to Sayed Hassan Nasrallah, it marked, perhaps, the first truly shameful act committed in Lebanon by these courageous men – fighters who actually drove the Israeli army out of Lebanon in 2000. The “heroes” of the south were prepared to attack their fellow Lebanese in order to preserve their political power alongside the corrupt and wealthy old men of Beirut. Nasrallah should have aligned himself with these young Lebanese and the Palestinians who joined them, and stood firmly at the side of the “people”. That would have been a profound and historic political act.

Instead, Nasrallah warned of “civil war” – the ghastly alternative used by the Sadats and the Mubaraks and other dictators to keep their impoverished people in fear. Power and privilege – their power and privilege – was more important, in the end, to those whose brothers fought and died for freedom against the Israeli occupying power.

So the question is now being asked, however unfairly, whether the existence of Hezbollah all along has been more about political self-preservation than liberation.

I don’t think so. Hezbollah is one of the few militias that has some integrity in Lebanon. But unless Nasrallah tells his people to stand alongside the Lebanese of all sects rather than attack them, then Hezbollah is going to find it difficult to wipe off the shame of the last few days.

Revolutionaries, especially the armed variety, are meant to defend all of their people, not stand to attention at the beck and call of corrupt men, the military arm of a decayed middle class government, some of whose members do indeed have allegiance to foreign powers. Is Hezbollah – and its venal Amal ally, controlled (of course) by the speaker of parliament, Nabih Berri – working for the Shia of southern Lebanon, some of whom are now opposing its tactics? Or for Syria? Or for Iran? What happened to the “muqawama”, the justly legendary resistance movement to Israel’s aggression?

Now, I know, the Beirut protestors are debating who their leaders might be. It’s the old problem. Those outside the country are not part of the struggle. Those who might – in Europe, perhaps, in the old eastern Europe – have been the intellectual backbone of a real political revolution in Lebanon, are too closely touched by the sectarianism of government.

In a different world, a different age, there’s one man who might have become the most charismatic leader of the “new” Lebanese: Walid Jumblatt, the Druze leader. He’s brave, charismatic in the most literal sense of the word, a true intellectual, a socialist by nature (even though he lives part of his time in a magnificent castle at Moukhtara in the Chouf mountains). I once called him the world’s greatest nihilist.

But, as a Druze leader, he represents only 6 per cent of the Lebanese people – see how a sectarian system defines your ambitions by percentages? – and as a revolutionary leader in a new Lebanon, he would inevitably be accused of trying to hold political power for his sect rather than his people.

That’s the true cancer of confessionalism. You cannot “cure” the disease of sectarianism. That is Lebanon’s tragedy. But leadership there must be if Lebanon’s protestors are to survive their struggle. Otherwise they will be divided. And they will fail.

Which is what Hezbollah and Amal are trying to do now. If they can beat the protestors, drive away the women and the children, turn the demonstrators into the infamous “mob” and “rabble”, frighten the Shia away from their brothers and sisters in the centre of Beirut, then the authorities – despite the admirable restraint of the army this month – will have a duty to crush violence. And that will be the end of another bright candle of opportunity to end the inherent curse of Lebanese history.

Perhaps the Lebanese protestors should take a moment to use their mobile phones for a little reflection on Hollywood. In the movie version of Dr Zhivago, revellers in a sleazy Moscow nightclub fall silent as they hear the drumbeat and singing of Bolshevik demonstrators in the snow-covered streets outside. Among the guests is Viktor Komarovsky (played by Rod Steiger); no revolutionary, no intellectual he.

Komarovsky is perhaps the most interesting and credible figure in the film, a dangerous, corrupting cynic who will move effortlessly from bourgeois businessman to Bolshevik minister as the revolution crushes the Tsarist armies who have ruled Russia for generations. But in the nightclub — aware that the Bolsheviks are leaderless and naive – Komarovsky leans towards the window and says loudly: “No doubt they’ll sing in tune after the revolution.”

The audience in the nightclub laughs. Then the demonstrators are cut down by the sabres of the Tsar’s cavalry.

Image: Lebanese protesters take to the streets of Beirut on Monday during demonstrations to demand better living conditions and the ousting of a cast of politicians who have monopolised power and influence for decades, on October 21, 2019 at Riad al-Solh Square in Beirut. Photograph: Anwar Amro/AFP via Getty Images)

Robert Fisk, Middle East correspondent of The Independent, is the author of Pity the Nation: Lebanon at War (London: André Deutsch, 1990). He holds numerous awards for journalism, including two Amnesty International UK Press Awards and seven British International Journalist of the Year awards. His other books include The Point of No Return: The Strike Which Broke the British in Ulster (Andre Deutsch, 1975); In Time of War: Ireland, Ulster and the Price of Neutrality, 1939-45 (Andre Deutsch, 1983); and The Great War for Civilisation: the Conquest of the Middle East (4th Estate, 2005).