The Shia Shift: Why Iran and Hezbollah Abandoned Suicide attacks 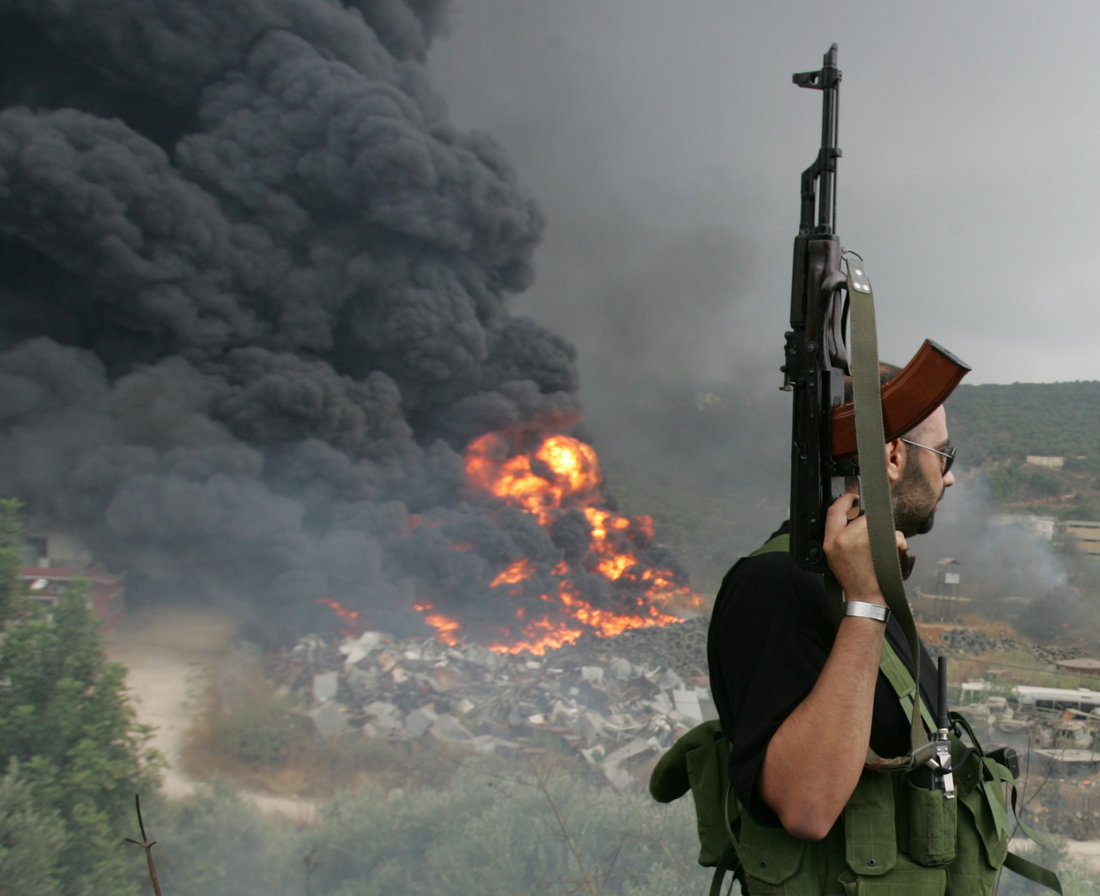 Thirty-five years ago last month, a Hezbollah suicide bomber drove a delivery van packed with explosives into the U.S. embassy in West Beirut. The explosion collapsed portions of the building and killed sixty-seven people, including seventeen Americans. Later that year, Hezbollah, with Iranian backing, conducted simultaneous suicide bombings of U.S. and French military barracks that collectively killed nearly three hundred soldiers. These attacks were part of the opening salvo of Hezbollah and Iran’s campaign of suicide operations that drove the West and eventually Israel out of Lebanon.

Since that time, suicide terrorism has spread across the globe as a diverse array of terrorist organizations, both secular and religious, have embraced the tactic in pursuit of their various causes. Curiously, even as new groups embraced martyrdom operations, the pioneers of the tactic—Iran and its Shi’a proxies—have quietly abandoned it. This shift reveals Iran and Hezbollah’s brutally pragmatic rationale for suicide operations, strongly challenging the popular notion that Tehran is a “martyr state” or irrational actor.

In the modern era, the emergence of martyrdom as a routine battlefield tactic can be traced back to the Iran-Iraq War of the 1980s. In the chaotic aftermath of the 1979 Islamic Revolution, Saddam Hussein, hoping to exploit the weakness of his long-time rival, invaded Iran in September 1980. As part of its haphazard response, the Iranian regime employed human-wave attacks—frontal assaults conducted by masses of unarmed soldiers—to stall and ultimately turn back Iraqi advances. The Islamic Revolutionary Guard Corps (IRGC) repeatedly resorted to these human-wave assaults during the remainder of the war.

A few years after Saddam’s invasion, a small IRGC contingent established itself among the Lebanese Shi’a community. The Iranian cadre found willing students in a group of disaffected Shi’a that had split from Amal, which was the most powerful Shi’a party in Lebanon at the time. This group would label itself Hezbollah in 1985. Its members espoused not only the ideology of their Iranian mentors, but also readily adopted their military tactics. Realizing the efficacy of martyrdom operations in the Iran-Iraq War, Hezbollah turned the weapon against Israeli and Western forces in Lebanon.

Although Iran pioneered these martyrdom operations, Hezbollah refined them to lethal effectiveness. Hezbollah conducted a total of thirty-six suicide bombings between 1982 and 1986. After 1986, however, the pace of these suicide operations slowed dramatically. According to Robert Pape and James Feldman, Hezbollah conducted no suicide attacks in 1987 and a couple suicide operations occurred each year between 1988–1990. After that, Hezbollah’s next suicide operation didn’t occur until 1995. Another followed in 1996, at which point they ceased altogether until a single one took place against Israel Defense Forces (IDF) troops in December 1999.

Since that time, Hezbollah has not carried out a single suicide terrorist attack—with the probable exception of the assassination of Rafik Hariri in 2005—despite continuing to engage in non-suicide terrorism. Nor is this limited to Hezbollah; in fact, Iran itself has also abandoned suicide terrorism, as have its other Shi’a allies. Most notably, in Iraq and Syria, where nearly half of all suicide operations have occurred, the bombings have been carried out almost exclusively by Sunni groups. Neither Syria’s Alawites nor Iraq’s Shi’a militias—many of which count Iran as their patron—have adopted suicide operations in any systematic fashion.

This stands in stark contrast to global trends, which show that such attacks have metastasized since 9/11. According to the Chicago Project on Security and Terrorism, there were 378 suicide terrorist attacks worldwide between 1982 and 2003. Between 2004 and 2015, however, that number rose to 4,436 such attacks.

The shift in the source of suicide terrorism has gone almost entirely unnoticed in the West, where Iran is still often regularly portrayed as a martyr state led by religious fanatics. This isn’t entirely surprising. For one thing, some attacks like the Burgas bus bombing in Bulgaria in 2012 initially appeared to be a suicide attack. It was only later that investigators determined the bomb had gone off prematurely. There is also the 2005 assassination of Rafik Hariri, which was carried out by a Sunni-Palestinian allegedly at the direction of Hezbollah. Moreover, neither Iranian leaders nor their Shi’a allies appear to have acknowledged this change in tactics. In fact, they seem quite content, even eager, to encourage the prevailing Western perception. Iranian and Hezbollah leaders still regularly praise martyrdom in the most public of settings and mediums. Each November, for example, Hezbollah celebrates “Martyr’s Day” in honor of those who have sacrificed their lives for the organization’s cause. As late as 2006, the IRGC was still touting the creation of “martyrdom brigades” to respond to any Western attacks.

So what explains the Shi’ites’ abandonment of suicide bombing even as Sunnis have adopted the tactic in droves?

Religion itself cannot fully account for this shift. Indeed, if anything, theology would predict that Shi’ites would be at the forefront in terms of using suicide bombings. After all, there is a strong tradition of martyrdom in Shi’a Islam dating back to the seventh century. Ashura, the anniversary of Imam Hussein’s martyrdom, remains one of the most important holidays celebrated by Shi’a communities throughout the world. Moreover, certain Iranian clerics, including the late Grand Ayatollah Fazel Lankarani and hardliners like Ayatollahs Misbah Yazdi and Ahmad Jannati, continue to defend martyrdom operations in principle.

The decision Iran and its Shi’a allies have made to abandon suicide terrorism is better explained by pragmatic considerations. These groups have always viewed the use of “martyrdom operations” as a tactic of last resort only to be used against conventionally superior enemies. Now that Shi’ites across the region are powerful enough to fight their adversaries conventionally, they no longer turn to suicide operations.

This is best demonstrated by looking at how Iran and Hezbollah previously employed martyrdom operations. When Saddam Hussein first invaded in 1980, Iran’s military was in a perilous state. After assuming power, Iran’s revolutionary regime began cleansing the armed forces of high- and mid-ranking officers suspected of harboring loyalties to the Shah. According to some estimates, as many as twelve thousand officers had been purged by the start of the war. Iran’s arms, most of which were supplied by the United States, also atrophied under the country’s newfound international isolation. As a result, Iran’s military was largely unable to combat Iraq’s better-trained and armed military using conventional tactics.

Severely outgunned, Ayatollah Khomeini turned to the one weapon he had in abundance: people. While Iran lacked sufficient numbers of tanks, artillery, aircraft, and trained soldiers, its population was roughly three times that of Iraq’s. Drawing upon the powerful imagery of Imam Hussein’s martyrdom at Karbala in 680 A.D., Khomeini called upon citizens to sacrifice themselves in defense of Islam and the revolution. He issued an unprecedented religious justification for the use of martyrdom as a weapon and succeeded in mobilizing tens of thousands of young Iranians. Without the time or the resources to provide its conscripts with military training. Instead, these zealous volunteers served as cannon fodder in the infamous human-wave assaults.

The effectiveness of this tactic was undeniable. Repeatedly during the war, but especially during the initial campaign to run Saddam’s army out of Iran, human-wave attacks helped overrun Iraq’s front lines. Although Iran sustained extensive casualties, it had little hope of otherwise overcoming Iraq’s quantitative and qualitative military advantages. As Pierre Razoux explained of Iranian leaders at this time, “Their limited financial resources prevented them from following Iraq in the frenetic race for armaments, and they were cynically aware that one hundred men would always come cheaper than a tank or an airplane.”

Over time, however, Iraq’s military became better able to counter the human-wave assaults. Consequently, near the end of the war, Iran’s leaders began openly questioning their utility. “When the enemy is alert . . . and brings his firepower to bear, the casualties will go too high,” Hashemi Rafsanjani, Iran’s top military commander at the time, said in July 1987. He added: “When, for example, we suddenly want to bring several thousand human crusaders to the war zone . . . there must be a relative consensus of victory.”

Hezbollah’s use of suicide terrorism follows a similar trajectory. In the early years of the Israeli occupation, the nascent Hezbollah, despite Iranian support, had little ability to resist the IDF through the use of conventional or guerrilla military tactics. Suicide terrorism was therefore an enticing option. As Grand Ayatollah Mohammad Hussein Fadlallah, who many consider the “spiritual leader” of Hezbollah, has argued, “If an oppressed people does not have the means to confront the United States and Israel with the weapons in which they are superior,” then they “fight with special means of their own.”

Similarly, Sayyed Hassan Nasrallah, Hezbollah’s Secretary General, noted that even after extensive “training, equipping, observations, frontier groups, rockets, explosives,” guerrilla attacks would only kill three or four Israeli soldiers. “On the other hand,” Nasrallah explained, “one single [martyr] without any training or experience . . . was able to kill eight or nine, wound twenty-one, and scare the entire ‘Israeli’ entity.” This may be an understatement: according to some estimates, suicide bombings are ten times as lethal as non-suicide terrorist attacks.

However, Hezbollah only approved such operations when they met two criteria: a high probability of success and a large number of enemy casualties. Thus, Fadlallah stated, “suicide operations should only be carried out if they can bring a political or military change in proportion to the passions that incite a person to make of his body an explosive bomb.” For Fadlallah, some of the earlier suicide bombings, such as the ones against Israeli intelligence centers in Tyre or Metulla, met these criteria. Over time, however, the Israeli military improved its defenses against such attacks, thus decreasing their lethality. At the same time, Hezbollah increased its conventional capability—especially in the form of Katyusha missiles—and no longer needed to resort to such desperate tactics. Consequently, Hezbollah’s leadership gradually turned to other methods.

This growing strength is almost certainly the reason other Shi’a populations across the Middle East have not embraced martyrdom operations, even as they have become the targets of Sunni suicide bombings. In Iraq, Shi’ites make up nearly two-thirds of the population and, following the overthrow of Saddam Hussein, controlled the state apparatus. They therefore confronted the Sunnis from a position of strength, and it was the latter group that turned to suicide attacks.

While many point to Iran’s human-wave attacks and Hezbollah’s suicide bombings to argue that they are irrational, religious fanatics, a closer look suggests the opposite is true. They appear to have adopted these tactics for brutally pragmatic reasons—namely desperation—and abandoned them once other options were available.

Zachary Keck (@ZacharyKeck) is a former managing editor of the National Interest.

Matthew Sparks is a member of the Board of Directors of the International Counter-Terrorism Youth Network, an organization committed to the promotion of counter-terrorism studies across the globe.

Image: A Lebanese Hizbollah guerrilla looks at a fire rising from a burning object in a Beirut suburb July 17,2006. Israeli Defence Minister Amir Peretz said on Monday that no Israeli jet or helicopter had been shot down over Lebanon but did not rule out that a drone many have been downed. REUTERS/Issam Kobeisi (LEBANON)
Tweet