The Syrian Revolution: A History from Below 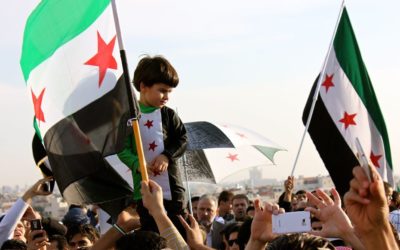 Syria has been the focus of much regional and global attention following the massive eruption of popular revolt in mid-March 2011. The Syrian revolution gradually developed into a war involving multiple local, regional and international actors. As a result, the revolution and its massive protest movement, as well as the resistance from below that have sustained them, has been mostly ignored or silenced. Hegemonic narratives centered around geopolitical rivalries and sectarian conflicts have dominated much of international and Western discourse stripping the Syrian popular classes of any social, political or revolutionary agency.

Against these narratives, the organizers of this webinar series propose a radically different approach. The Online Summer Institute titled “The Syrian Revolution: A History from Below” is a webinar series about grassroots politics, class struggles, and state violence in Syria since the 1970s up until the present. The 12-part series (June 20th – August 5th) includes presentations from activists, organizers, academics, and writers, who will discuss an array of topics ranging from grassroots movements, imperialism and anti-imperialism, political economy, international solidarity, feminist struggles, the prison system, healthcare weaponization, Palestinian solidarity, Kurdish self-determination, refugees, revolutionary art, and the future of the Syrian and regional uprisings (2011 and today). The Online Summer Institute highlights local struggles, lived experiences, and the expertise of Syrians with diverse backgrounds (political prisoners, doctors, activists, intellectuals, artists, students, refugees, academics, etc…). Participants will discuss the history of violence in Syria, the pitfalls of a besieged revolution, and the future of a country in ruins. We are proud to say that more than half of our panelists are Syrians. (More Syrian voices would have been included but that would have meant a longer webinar series and translation from Arabic, both of which would have postponed and extended the series further.)

This webinar will challenge the mainstream, orientalist, and manichean perspectives that have come to dominate narratives surrounding the events that have transpired in Syria since 2011. That includes a mainstream perspective that often ignores the revolutionary dimension of the revolt focusing instead on what it perceives and presents as “irrational violence”. This orientalist narrative reduces all struggles in the region to supposed millennium old conflicts between various sects, religions, tribes, and ethnicities. Left-wing orientalists, dismissive of any struggle that doesn’t speak the language of social movements in the West or that deviates from the Western history of labor organizing, are in turn complicit in this narrative silencing. The manichean or campist viewpoint we are combating suggests that the world is composed of imperialist and anti-imperialist countries and thus one need simply support so-called anti-imperialist countries while ignoring class conflict and state violence within those very same societies. Needless to say, all these narratives work to deny the role of the Syrian people as actors in their own popular struggle. The webinars propose an alternative to these hegemonic narratives; a people’s history of the Syrian revolution. This type of history provides an entry point to understanding the Syrian revolution, its popular protests and local struggles. The curriculum webinar will work to center the interests of popular classes, subjugated communities and marginalized groups while providing an alternative analysis of the revolution by emphasizing progressive and internationalist perspectives.

Program (June 20 – August 5th)
The links to the webinars will be posted below.

Webinar 4: Wednesday July 8th @ 2pm EST
From BLM to Palestine and Syria: The Politics of Revolutionary Solidarity
Participants: Khury Peterson-Smith, others will be announced soon

Webinar 7: Saturday July 18th @ 2pm EST
From Syria to Mexico: The Fight for a World without Borders
Participants: Omar Dahi, Senay Ozden, Others will be announced soon
Moderator: Danny Postel