The Viral Emergency in Palestine 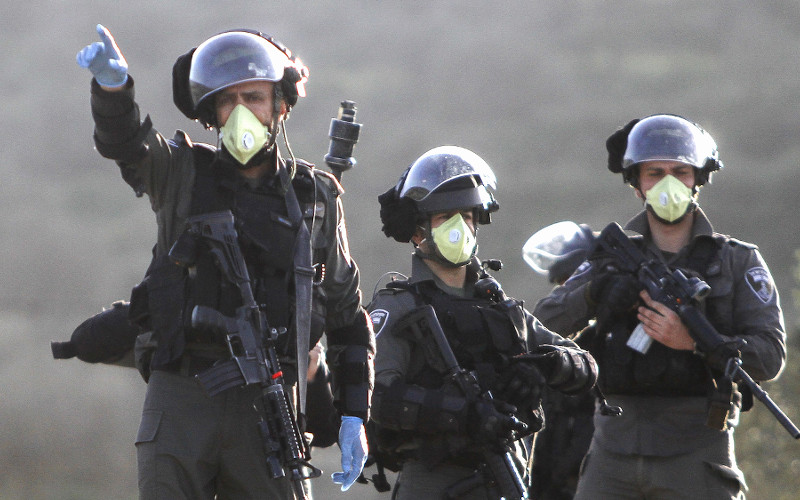 Over a dozen states, including Hungary, Ethiopia, Japan, Canada, and Botswana, have recently declared a “state of emergency” giving governments sweeping powers to combat the COVID-19 pandemic. Israel did not have to do so, having incorporated emergency regulations into domestic law upon its establishment in 1948. Israel’s radical response to the global pandemic were thus built upon the powers and infrastructure designed for settler-colonial expansion and military occupation.

These measures covered a full lockdown with an intercity travel ban enacted this Passover, including closure of the entire ultra-Orthodox city of Bnei-Brak near Tel Aviv that was experiencing one of the highest rates of infections; covert operations by the Mossad spy agency to obtain medical equipment; and attempts to deploy “digital techniques used in the fight against terror” – designed to dominate and regularly violate the privacy of millions of Palestinians – to the task of monitoring carriers of the virus.

As a sovereign power, Israel has a “legal duty” and ultimate overall responsibility for the healthcare of around seven million Palestinians, whether they are citizens or subjects living under occupation in Gaza, Jerusalem or the West Bank. It has one of the most advanced health care systems in the world, but its drastic measures are prioritizing the security Israeli-Jewish citizens. A petition by the legal rights group, Adalah to the Israeli High Court showed that real-time coronavirus updates were not made available in Arabic for its Palestinian citizens. Not coincidentally, several Palestinian localities such as Umm el-Fahm, the coastal town of Jisr Al-Zarqa and Daburiyya near Nazareth – now under virtual siege – in the north were among the most infected with testing for the virus among Arab citizens at only around 10% of the total testing done by the state, despite forming one-fifth of the total population.

Having spent the past seven decades dividing Palestinian communities into segregated enclaves, and devising legal structures of racialized domination, it already has the architecture in place for a mass ‘lockdown’. But under the guise of emergency, Israel has also used the global shift in attention to continue creating new facts on the ground.

During the height of the ‘health emergency’ the government undertook house demolitions in the Palestinian city of Kafr Qasem. On March 12th, the Israeli army escorted a visit by settlers to the Sebastia archeological site in Nablus – a mythical site for the settler movement which they are still seeking to illegally annex – in defiance of the Palestinian Authority’s efforts to prevent large gatherings. On March 26th, army bulldozers arrived to the town of Khirbet Ibziq in the Jordan Valley to destroy and confiscate materials to be used for a field clinic meant for its Palestinian residents. A few days later, on March 30th, and wearing hazmat suits, the army used the lockdown to raid Palestinian homes in Ramallah. The United Nations reported that settler harassment against Palestinians has amplified during the pandemic.

As we write these words, negotiations toward a new coalition government are underway, composed of the rightist, messianic, and pro-settlement bloc of Likud led by Prime Minister Benjamin Netanyahu and Kachol Lavan (Blue and White) headed by Benny Gantz. Seeking to present an emergency coalition purportedly to “fight the virus,” its only major planned policy is the largest land-grab in a generation – unilaterally annexing up to 30% of the West Bank, including all illegal settlements and the Jordan Valley, and citing the Trump Peace Plan as support. While the state has yet to announce its plans for the millions of Palestinians whose lands will further be lost as part of this illegal annexation, its record of forced population transfer of Bedouin Palestinians there and in the Naqab may serve as a blueprint.

Furthermore, the Israeli security apparatus has also worked to limit Palestinian attempts to take measures to combat the spread of COVID-19 in their neglected and policed communities. In the early hours of Friday April 3rd, Israeli police violently arrested Fadi al-Hadami, the Minister of Jerusalem Affairs for the Palestinian Authority, in his family residence in the Suwana neighbourhood of occupied East Jerusalem. His supposed ‘crime’ was setting up disinfection stations and acting to instruct people to remain home. Two days later, on April 5th, the Palestinian Governor of Jerusalem, Adnan Ghaith was arrested in the early hours by Israeli police officers decked in protective surgical masks and plastic gloves from his home Silwan, also in East Jerusalem, for similar ‘crimes’. Though they were combatting a health crisis affecting the whole country, their official charge was ‘Palestinian activity in Jerusalem’, considered ‘illegal’ by Israel as it seeks to keep Jerusalem under its exclusive control.

In Gaza, where three decades of isolation and multiple major Israeli military incursions systematically eroded essential health infrastructure, the Israeli Ministry of Defence decided earlier this month to restart spraying toxic herbicides using crop-dusters along the border. At Forensic Architecture, we have already documented the ways in which this destructive practice weaponizes the wind to carry herbicides hundreds of meters deep into Gazan lands, devastating the livelihood of farmers and potentially causing major health risks to nearby communities.

As the Israeli siege in Gaza has led to the socio-economic suffocation of its almost two-million residents, recommended practices of self-isolation, social-distancing, and access to clean drinking water, are near-impossible.

While so many around the world are starting to imagine ‘end-of-times’ scenarios gearing up to a radical transformation of liveable conditions – in particular for working-class, racialized and indigenous communities – the situation already on the ground in various parts of Palestine shows us what such scenarios may look like. Indeed, the United Nations had already warned that Gaza will be “unlivable” this year.

The pandemic sharpens the demands of the Palestinian anti-colonial struggle, making it increasingly relevant to other societies worldwide. That it exposes, more than ever, the interdependencies of all people, our collective health and well-being, means that, rather than being grounded in domination and surveillance, effective responses to this pandemic must involve dismantling racialized systems of inequality. •

This article first published on the Verso Books website.

S. C. Molavi is the dedicated Israel-Palestine researcher for Forensic Architecture and Associate Professor of Political Science at the American University in Cairo, Egypt. She is author of Stateless Citizenship: The Palestinian-Arab Citizens of Israel (Brill, 2013), which explores the dynamics of Israel’s multifaceted legal, political and structural system of control through the lens of citizenship.

Eyal Weizman is the founding Director of Forensic Architecture and Professor of Spatial and Visual Cultures at Goldsmiths, University of London.