The Women of the Revolution: inside the Kurdish Rojava Revolution 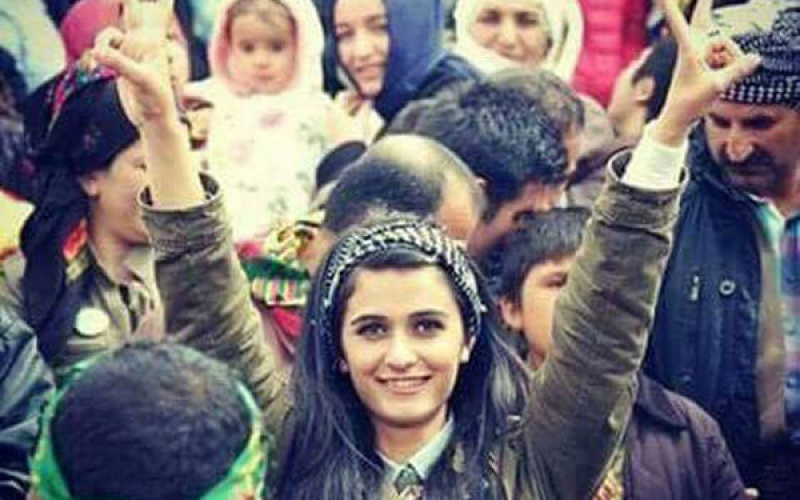 A remarkable story is unfolding that defies the usual narrative about Syria.

In contrast to the misogyny and anti-democratic values of the jihadists of the Islamic State group, an extraordinary egalitarian and pluralist engagement is under way.

Foreign Editor David Pratt goes to the heart of the Kurdish Rojava Revolution and meets some of the women making it happen.

As befitting such a memorial to great sacrifice, it’s a solemn place. To wander its avenues flanked by 1,300 headstones one can only but ponder on the lives of those buried there. Sometimes though there are clues in the faces that peer out from the glass mounted framed photographs left by relatives and loved ones.

Most of those depicted are young, in their late teens and early twenties, and rather uncommon for a cemetery dedicated to fallen soldiers, many are women.

It was grey and overcast with brooding storm clouds scudding across the sky like giant Zeppelins, the day I visited the Martyr’s Cemetery in the northeast Syrian town of Kobane.

Almost four years have passed since that bitter siege in 2014 when Islamic State (IS) jihadists overran most of this city near the Turkish border, only to be beaten back by the determined and near legendary resistance of mainly Kurdish fighters.

Today many consider the battle for Kobane to be a key turning point in the war against IS in Syria.

Since then something equally extraordinary too has happened in this remote corner of northern Syria a place the Kurdish name for which is Rojava or quite literally Western Kurdistan.

It’s a story that defies the usual narratives about Syria and the Middle East. One totally at odds too with the reactionary, hierarchical, misogynistic and vehemently anti-democratic diktats espoused by the jihadists of IS.

It was six years ago when the Syrian government regime of President Bashar al- Assad found itself embroiled in a civil war. It was at that moment too that Kurdish political parties in Rojava declared autonomy and began their extraordinary project of self-government and equality for all races, religions, women and men. Out of this was born the Rojava Revolution as it has now become commonly known.

With gender and religious equality enshrined within the revolution’s constitution, women, especially, play a crucial role in shaping the political direction of this remarkable movement.

All too often in the course of the revolution women or their loved ones have also made the ultimate sacrifice for a cause in which so many here passionately believe.

Women’s People Protection Units (YPJ) were formed that fought alongside their male counterparts in the YPG, both forces being under the command and control of the leading political party of the Rojava Kurds, the Democratic Union Party (PYD).

“We came to plant flowers, we do it once a week or whenever he comes to our mind,” Zuleyxa Bilad tells me while standing in the Martyr’s Cemetery with her daughter Gardenia alongside the grave of her husband who was killed in the bitter battle for Kobane.

It was at the height of the fighting that the YPG fighter was shot by an IS sniper in the city on a day that also saw 27 of his comrades killed, many women among them.

I asked Zuleyxa if her daughter Gardenia now five years old knew what had become of her father?

“Gardenia knows everything because I explained everything to her and sometimes she cries,” Zuleyxa replies.

“Later she will understand that her father along with his brothers and sisters died defending the revolution for all of us, so that life will be better for her and the next generation when they are adults,” Zuleyxa added, before both mother and daughter continued adorning the grave with the flowers and plants they had brought from the market in Kobane.

Women have borne the brunt of the fight against IS and shouldered the responsibility of defending and shaping the Rojava Revolution in so many ways. Some like Zuleyxa have lost husbands, sons and daughters. Others themselves have served and perished on the frontlines.

So many of the graves in Kobane’s Martyr’s cemetery have the names of young women inscribed into the marble of their headstones or have pictures of them smiling and dressed in the khaki military fatigues of the all-female YPJ People’s Self-Defence Units.

As well as resisting IS in Kobane, women were also involved as part of the umbrella Syrian Democratic Forces (SDF) that comprises both Kurds and Arabs, in the fierce fighting that culminated in October last year in the ousting of IS from its self-proclaimed capital Raqqa, most of which now lies in bomb blasted ruins.

More recently women have fought and died too on the battlefields surrounding the city of Afrin. There Turkish forces and their militia allies who have much in common with the jihadists of IS, have advanced forcing many Kurds and others to flee eastwards to Kobane.

“Our family’s ancestors have been living in Afrin for over 200 years,” says Nuri Urik, a 45-year-old Kurd who, along with his family and thousands of others, was forced from Afrin by the fighting.

Today, he and his wife, children and grandchildren have taken up home in Kobane.

“The whole journey was traumatic with the constant bombing, but the moment that we left Afrin was the worst, nobody remained in the village, everyone left,” Mr Urik recalled, of the day just a few months ago when he and his family fled.

During the journey, his daughter-in-law Hemide Dede was pregnant. Once in Kobane, she gave birth to his granddaughter Xedice, who when we talked was just weeks old.

Tough as life is in Kobane the womenfolk of Mr Urik’s family now find themselves in a very different environment to the one they would have been subject to had they stayed in Afrin at the mercy of the occupying Turkish forces and their Islamist militia allies.

The beating political heart of the Rojava project is generated by communal assemblies, in which local people take decisions for themselves, be it about jobs, the environment, healthcare, literacy, the rights of the displaced or whatever. In every sphere women are scrupulously given an equal voice to men and women co-chair every meeting and every assembly.

Emina Bekir and her colleagues Almaz Rumi and Heval Heyad run the Kobane Women’s Board, the sharp end of an administration that deals with the day-to-day work of providing facilities to help women, ranging from creches to literacy project for the elderly.

“Things are far from ideal and basic resources remain out biggest problem, but we have every right to be proud of what we have achieved so far and with adequate overseas support who knows what we are capable of,” says Emina Bekir head of the Kobane Women’s Board. She has a point. From local defence groups and Women’s Academies’ to advance equal opportunities in education to ‘Women’s Houses’ where those who have experienced domestic violence can find shelter, support and legal representation there is much to admire.

For their part critics have claimed that the Rojava revolution is ‘cultish,’ ‘communist’ or ‘pseudo Marxist’ to mention just some of the negative observations cast its way. But while there are elements of such characteristics, up close the Rojava Revolution remains democratic in a way many in the West would be envious of.

Real people by and large govern here, not the career and opportunist politicians that have come to plague so much of governance in the West.

The real internal hands-on workings of this system became clearer one afternoon while in Kobane when I visited a cultural centre where hundreds of local women and others displaced by the fighting from the city of Afrin had gathered for a conference. Young and not so young, all were members of the local ‘Parastina Jin’ a local community defence group.

“Right now here in Rojava there is a revolution within the revolution,” insisted Ayse Efendi, who is co-chair of the Movement for a Democratic Society and was presiding over the conference.

Married to former co-chairman of the PYD, Salih Muslim Muhammad, she like many women of the revolution I encountered was keen to stress that what is underway in Rojava is not just a fight for the rights of Kurdish women but also for non-Kurdish minorities, mostly Arabs but also Syriacs, Turkmen and Assyrians.

This is not just wishful thinking but implemented at the most basic level. If for example language difficulties arise during meetings or conferences then interpreters are provided as I myself witnessed.

No distinction on the basis of ethnicity or background is made and it doesn’t stop there. Beyond the region too what the Rojava experience represents says Ayse Efendi is “the fight for women’s rights internationally”.

This global outlook and senses of solidarity was something I was to hear time and again from women’s representatives in Rojava.

To date the Rojava womens’ achievements are nothing short of remarkable in a region traditionally very conservative and home to rural and peasant norms. Here the ‘old ways’ included prevailing attitudes that saw the existence of child marriage and keeping women at home.

Many women made the point that historically the problems they faced derived mainly from two sources, the family and the state. Intimidation and arrest were for a long time common in this part of Syria for those women who did not toe the established line.

“Historically there were certain people in both these sections of society who believed that if women became educated and emancipated, they would become a source of problems for wider society and the then existing political infrastructure,” says Nejbir Teyar a 24 year old spokeswoman for the Kongreya Star (Star Union of Women).

Kongreya Star is a confederation of Rojava women’s organisations whose guiding principle is that “without the liberation of women, a truly free society is impossible”. It has been pivotal in the significant advances made in gender relations in the region.

“When you look at Kurdish history, women have always been a powerful influence in the family but we have taken that influence and emphasised its positive rather than negative factors,” Ms Teyar explained.

I put it to her that the Middle East was a challenging place to say the least for anyone seeking to enhance women’s rights and asked where might the Rojava women’s revolution be in say five years time?

“We are not daunted by such challenges, women have been suffering for thousands of year, but if we organise to get there then nothing can stop us,” came her reply adding again too the importance of global solidarity.

“We do not see ourselves detached from other women’s struggles internationally, when we see a single women suffer we feel the pain,” she told me.

On the morning that I left Kobane to begin my journey home it was an early start. In the dawn light we pulled up at the first of many checkpoints where a young women YPJ member dressed in camouflage fatigues and carrying a Kalashnikov rifle checked our ID. A short time later on the city’s outskirts we passed the Martyr’s Cemetery shrouded in drizzle, but I could just make out the figures of other women YPJ members laying flowers on another grave. The Rojava Revolution goes on.