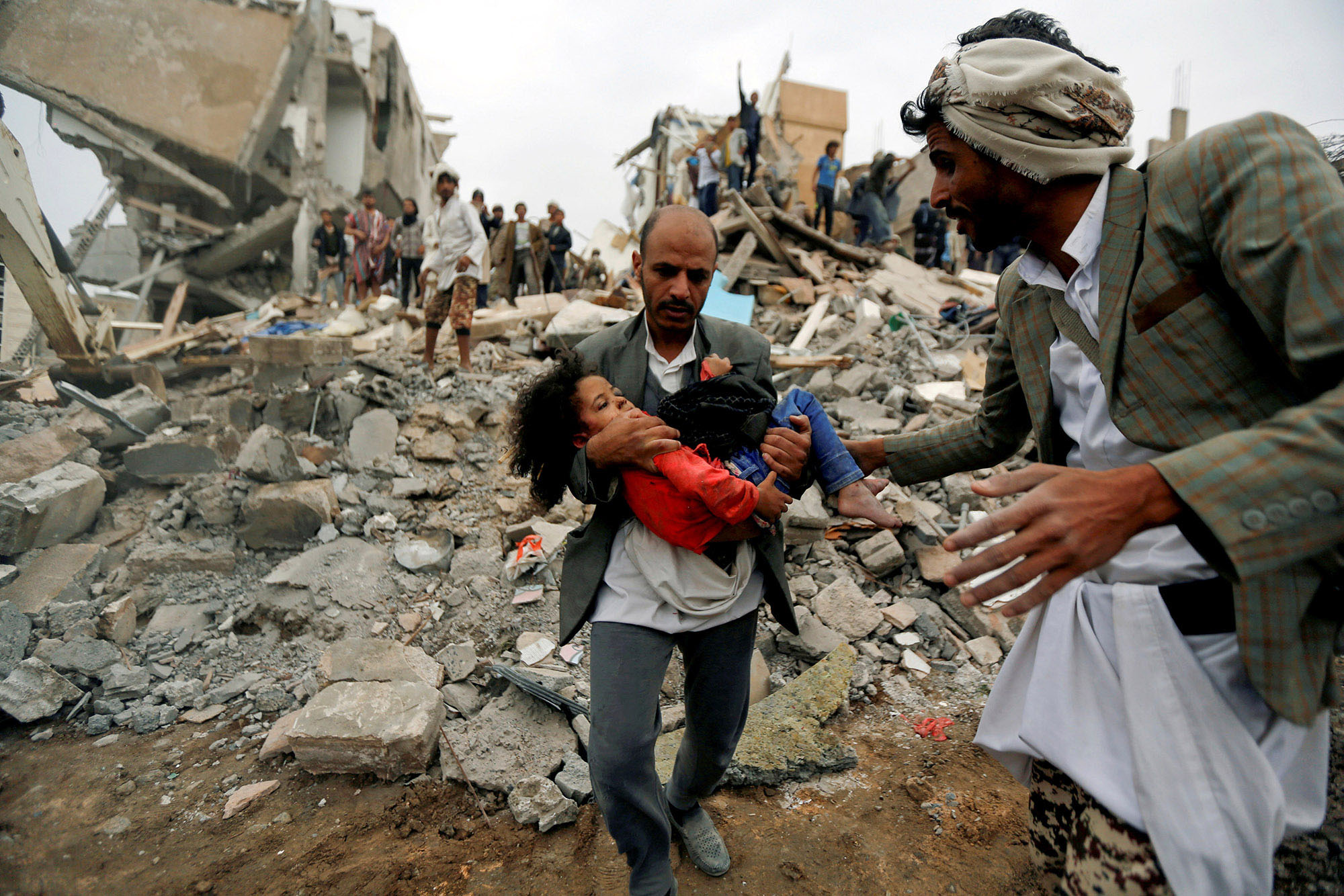 “Making billions from arms exports which fuel the conflict while providing a small fraction of that in aid to Yemen is both immoral and incoherent.”  So thundered Oxfam’s Yemen Country Director, Muhsin Siddiquey after consulting figures from the Stockholm Peace Research Institute (SIPRI) showing that members of the G20 have exported over $17 billion worth of arms to Saudi Arabia since the Kingdom entered the conflict in Yemen.  “The world’s wealthiest nations cannot continue to put profits above the Yemeni people.”

They do, and will continue to do so, despite the cholera outbreak, coronavirus, poorly functioning hospitals, and 10 million hungry mouths.  The latest illustration of this is the Trump administration’s hurried $23 billon sale of 50 F-35 fighter aircraft, 18 MQ-9B Reaper drones, air-to-air missiles and various other munitions to the United Arab Emirates.  The UAE used to be a more enthusiastic member of the Saudi Arabian-led coalition that has been pounding Yemen since 2015.  Despite completing a phased military withdrawal from the conflict in February 2020 to much fanfare, Abu Dhabi remains involved in the coalition and an influential agent.  Amnesty International has issued a grim warning that such weapons might well be used in “attacks that violate international humanitarian law and kill, as well as injure, thousands of Yemeni civilians.”

With the imminent change of administration in the United States, there is a moral flutter in Congressional ranks, though much of it remains meek and slanted.  Democratic Senators Bob Menendez (NJ) and Chris Murphy (Conn.), along with Republican Senator Rand Paul (Ky) intend introducing separate resolutions disapproving of President Donald Trump’s sale. Menendez felt morally mighty in warning the Trump administration that “circumventing deliberative processes for considering a massive infusion of weapons to a country in a volatile region with multiple ongoing conflicts is downright irresponsible.”

Murphy expressed his support for “the normalization of relations between Israel and the United Arab Emirates (UAE), but nothing in that agreement requires us to flood the region with more weapons and facilitate a dangerous arms race.”

The US President-elect, Joe Biden, has thrown a few titbits of promise to critics of the US-Gulf States circle of love and armaments.  During the Atlanta Democratic debate held in November last year, he entertained a departure from a policy embraced during the Obama administration, certainly with regards to Saudi Arabia.  “I would make it very clear that we were not going to in fact sell more weapons to them.”  A Biden administration would “make them pay the price, and make them in fact the pariah that they are.”  Specifically on the Yemen conflict, he promised to “end the sale of material to the Saudis where they’re going in and murdering children.”  Fighting words, easily said when a candidate.

This view was reiterated to the Council on Foreign Relations in August this year.  “I would end US support for the disastrous Saudi-led war in Yemen and order a reassessment of our relationship with Saudi Arabia.”  The Trump administration had issued the kingdom “a dangerous blank check. Saudi Arabia has used it to extend a war in Yemen that has created the world’s worst humanitarian crisis, pursue reckless foreign policy fights, and repress its own people.”

Progressive groups have picked up a scent they find promising.  Policy director for Win Without War, Kate Kizer, expressed hope “that [Biden] starts by immediately undoing as many of the just-notified sales to the UAE as possible, and by putting the brakes on transfers that Congress has previously tried to reject under Trump.”

The moral wash on this is, however, thin.  Menendez, for instance, is hardly giddy about the fate of Yemeni civilians in the context of such arms sales, citing “a number of outstanding concerns as to how these sales would impact the national security interests of both the United States and of Israel.”  Priorities, priorities.

Biden’s top foreign policy advisor, Tony Blinken, seems less concerned about who will be the target of the weapons in the UAE sale than any upset caused to that most unimpeachable of allies, Israel.  Sales of the F-35, for instance, were intended as a US-Israeli preserve.  Selling it to other powers in the Middle East might well compromise the “qualitative military edge” doctrine Washington adopts towards the Jewish state.  “The Obama-Biden administration made those planes available to Israel and only Israel in the region,” explained Blinken in an interview with the Times of Israel.  The new administration would have to “take a hard look” at the F-35 sale.  Was it, he wondered, a quid pro quo for the normalisation deal between Israel and the UAE?

Mammoth arms sales continue to remain matters of business and politics, with business tending to be the crowing representative.  Halting or curbing arms sales is only ever trendy and never permanent.  Oxfam reminds us of that blood-soaked truth.  “When arms exports by G20 nations to other members of this [Arab] coalition are included, the figure of $17 billion rises to at least $31.4 billion between 2015 and 2019, the last year for which records are available.

”Binoy Kampmark was a Commonwealth Scholar at Selwyn College, Cambridge. He lectures at RMIT University, Melbourne and can be reached at: bkampmark@gmail.com. Read other articles by Binoy.