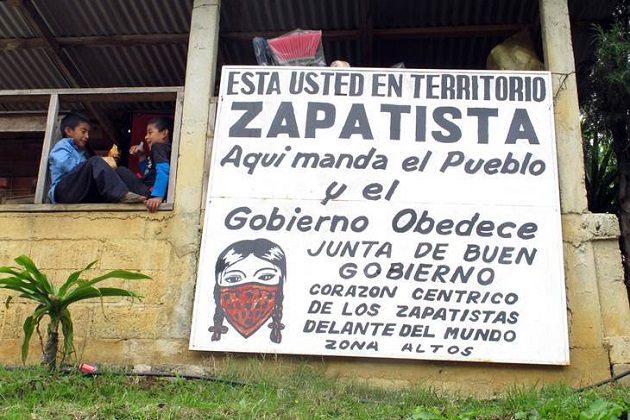 Beyond the city streets and markets of San Cristóbal de las Casas, steep roads wind into the misty mountains of Chiapas, past the Mexican state’s military outposts, and toward the autonomous communities of the Zapatistas, a movement which erupted onto the world stage on January 1st, 1994. That day, they proclaimed their resistance to centuries of exploitation and abuse, and denounced Mexico’s entry into the North American Free Trade Agreement (NAFTA).

As Zapatista Subcommandante Marcos explained then, “NAFTA is a death sentence for the indigenous people.”

Fourteen years later, in one of Marcos’ final public speeches, he said “we ask those who look up” to those in power for answers, “at least for a moment, to put aside your readings of The Economist, The New Yorker, People, and Al Gore’s keynote speeches; to put to rest for a few minutes your ghosts of the Gulag and the Berlin Wall; to put out for a moment the candles lit for the ‘lesser evil’ former candidate…”

These words are a fitting invitation to step outside of capitalism and politics as usual and into The Zapatistas’ Dignified Rage: Final Public Speeches of Subcommander Marcos, a new collection of the pipe-smoking rebel’s thoughts on social theory, Mexican politics, Zapatista history, and anti-capitalist organizing from below. Of course, scattered throughout the book are Marcos’ jokes, anecdotes of life in La Realidad, and children’s stories with hidden revolutionary meaning, such as The Pedagogy of the Machete and other anti-patriarchal parables.

The bulk of Marcos’ speeches gathered here are from international gatherings and conferences in 2007 and 2009 in San Cristóbal de las Casas, Chiapas at the Indigenous Center for Integral Training-University of the Earth, a grassroots educational center with long-standing ties to the Zapatistas. The Center promotes ecological sustainability, self-sufficiency, and community empowerment.

Marcos presented his speeches at these gatherings alongside other notable intellectuals such as world-systems analyst Immanuel Wallerstein, Mexican social scientist Carlos Antonio Aguirre Rojas, British art critic John Berger, Canadian journalist Naomi Klein, prominent leftist Mexican thinkers Gustavo Esteva and Pablo González Casanova, and many others from around the world. The introduction to the book helpfully contextualizes Marcos’ speeches alongside those of other presenters, as well as introduces the Zapatistas and their struggle, from the initial uprising in 1994, through the “Other Campaign” to Marcos’ farewell speech in 2014, when he stepped down from the public role as Zapatista Subcommandante.

A rich vein of thought and analysis coursing through the pages of this book deals with Marcos’ views on the relationship between theory and reality, and how it applies to the Zapatista struggle.

At a 2007 conference in San Cristóbal, Marcos begins one of his speeches on theory by referencing music he had heard the night before, music which had a “corrido-cumbia-ranchera-norteña beat.”

“If that is not theoretical defiance, then I don’t know what is,” Marcos says. “And do not ask me how they play that or dance to it, because I can’t even knock on a door right.”

The reference to this music is linked to Zapatista theory, he explains, because “the seriousness with which the Zapatistas approach theoretical issues is known to all, so I will only say that you’ll have to find a way of connecting theory to love, music, and dance.”

He speaks of the distance in academia between theory and reality, and “the sad spectacle of self-proclaimed social scientists dragging themselves with remarkable joy into a conceptual void.”

To illustrate his point, Marcos describes commercials selling products that promise to help you lose weight. For example, advertisements for a “cookie that will give you a spectacular figure all without doing any exercise other than lifting the product into your mouth and chewing it.”

“In the same vein,” he continues, “in the past few years an idea has gathered momentum in Mexico’s progressive-intellectual circles: the idea that social relations can be transformed without a fight and without touching the privileges that the powerful enjoy. All you need you to do is fill out a ballot and violá! The country transforms…”

Subsequent discussions on Zapatista theory are grounded in specifics about the corrupt Mexican political class, Zapatista solidarity for abandoned rural towns during massive floods in Chiapas, and the long memory of indigenous communities.

Marcos discusses the reasons behind the 1994 uprising, and how in 1993 one rancher and large landowner named Constantino Kanter coined the phrase, “In Chiapas, a chicken is worth more than an indigenous person’s life.”

That phrase represents the system the Zapatistas rebelled against, and their Revolutionary Agrarian Reform Law from that year is published in this book in full. It begins with “Poor peasants in Mexico continue to demand that the land be for those who work it.”

When the rebels gained control of land in Chiapas in 1994, Marcos continues, this law was implemented, the ranchers were expelled from their property, and the land was divided among the indigenous people. “[T]he first thing they did was tear down the fences that protected the estate owner’s houses.”

One day before dawn, the rebels, “these men, women, children, and elderly uncovered their faces and sang and danced, always with rhythms that have no known categorization. They say that they were not less poor than before and that problems of all sorts were upon them – death being one of these problems – so we do not know the motive, cause, or reason for their joy. According to the latest information, they have kept dancing, singing and laughing for fourteen calendars…”

It’s this blending of theory and reality – in revolutionary action and organization – that is at the heart of Marcos’ philosophical explorations, jokes, and stories presented here. As he elaborates toward the end of another speech:

“I know that feelings do not fit into theory, at least into the kind of theory that is now stumbling around. That it is very difficult to feel with your head and think with your heart. […] Because for us Zapatistas, the theoretical problem is a practical problem. It isn’t about promoting pragmatism or about returning to the origins of empiricism, but about clearly indicating that theories not only must not be isolated from reality but also must look within it for the sledgehammers that are sometimes necessary when one comes across a conceptual dead-end. Rounded, complete, finished, coherent theories are good for taking a licensing exam or for winning prizes, but they tend to shatter at the first gusts of reality.”

In the introduction to this book, Nick Henk writes that Marcos’ speeches provide “vivid snapshots” of the impact of global capitalism. “Crucially, it is a picture produced by those situated at the sharp end of capitalist exploitation,” he explains. The profound history and lived experience of the Zapatista struggle weaves throughout Marcos’ speeches, making his critiques of capitalism and analysis of how to overcome it all the more powerful and illuminating.

For example, in a presentation of “Some Theses on Antisystemic Struggles” Marcos outlines how “capitalism dispossesses, exploits, represses, and discriminates. In the neoliberal-globalization stage, capitalism wages war on all of humanity.” To increase profits, capitalists have to open new markets, and produce new commodities, he explains, which leads to the “conquest and reconquest of social territories and spaces that before were of no interest to capital.”

Forests, natural resources, water, ancestral knowledge – these are all commodities, he continues. “People found in spaces and territories with these and other commodities are, whether they like it or not, enemies of capital.”

Dispossession of indigenous land and territory, and violence against anyone who stands in the way, are part of capitalism’s war. For example, last year 207 land and environmental defenders were killed in 22 countries around the world. Most of them were linked to conflicts around agribusiness and mining. Chiapas has been on the front lines of such resource and land conflicts for centuries.

For Marcos and the Zapatistas, the hope in overcoming capitalism lies with people’s movements.

“Great transformations do not begin from above nor with monumental and epic deeds,” Marcos explains, “but with movements small in size and that appear irrelevant to politicians and analysts from above. History is not transformed by packed squares or enraged crowds, but, as [social scientist] Carlos Aguirre Rojas points out, by the organized conscience of groups and collectives that know and recognize one another, below and to the left, and build another politics.”

Marcos’ rich history lessons, political theory, and analysis of globalization and Mexican society fill these pages. Alongside them are illuminating bits of humor, children’s stories, and moments of poetic insight which point to why Marcos, and the Zapatistas in general, have opened up the world’s political imagination for so long. For example, the Subcommandante tells us:

“Sometimes, in the predawn hours when they find me wandering around without possibility for rest, I am able to climb up on a wisp of smoke and, from very high up, I look at us. Believe me that what can be seen is so beautiful that it’s painful to look at. I’m not saying that it’s perfect, nor that it’s finished, nor that it has no gaps, irregularities, wounds to close, injustices to remedy, spaces to liberate. Eppur si muove. And yet it moves. As if everything bad that we are and carry were mixed with the good that we can be, and the entire world redrew its geography and its time were remade with another calendar. Well, as if another world were possible.”

Benjamin Dangl has a PhD in Latin American history from McGill University and has worked as a journalist throughout Latin America for over a decade, writing for outlets such as The Guardian, Al Jazeera, The Nation, and Vice. He is the author of the books The Price of Fire: Resource Wars and Social Movements in Bolivia, Dancing with Dynamite: Social Movements and States in Latin America, and the forthcoming The Five Hundred Year Rebellion: Indigenous Movements and the Decolonization of History in Bolivia, all with AK Press. Dangl edits TowardFreedom.org, a progressive perspective on world events, and teaches journalism at Champlain College in VT. Email BenDangl(at)gmail.com. Twitter @BenDangl

Feature image:“You are in Zapatista rebel territory. Here the people command and the government obeys. Council of Good Government, Central Heart of the Zapatistas Facing the World. Highlands Zone.” Zapatista zone of self-government, the Highlands Chiapas.