Think we should be at school? Today’s climate strike is the biggest lesson of all 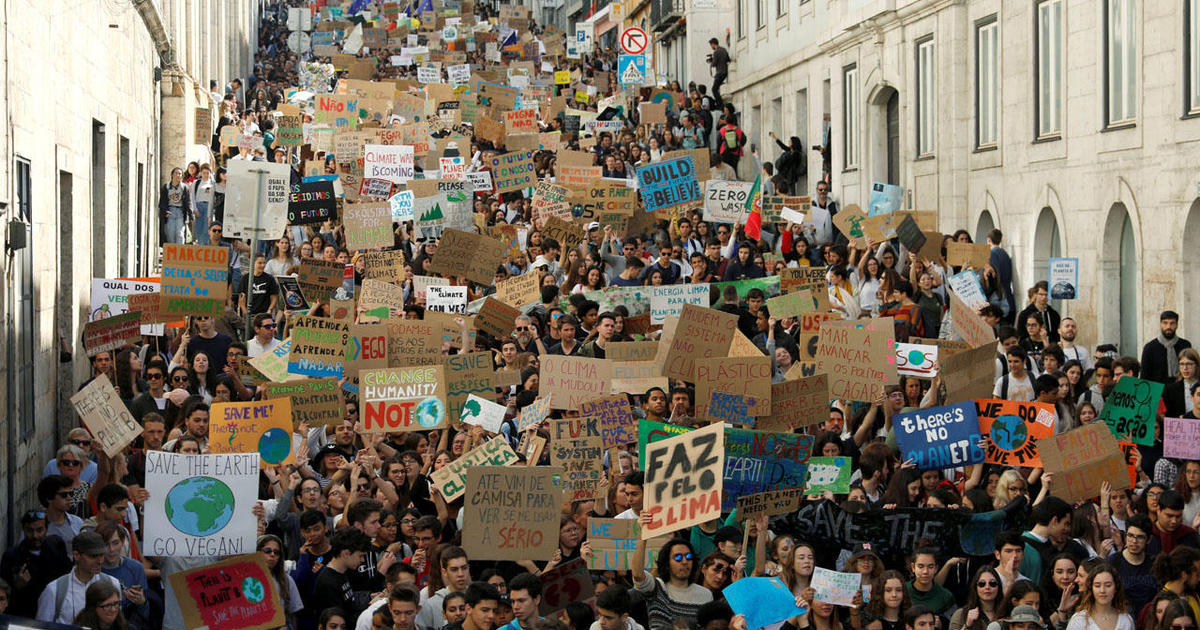 It started in front of the Swedish parliament, on 20 August – a regular school day. Greta Thunberg sat with her painted sign and some homemade flyers. This was the first school climate strike. Fridays wouldn’t be regular schooldays any longer. The rest of us, and many more alongside us, picked it up in Australia, Germany, Belgium, Switzerland, New Zealand, Uganda. Today the climate strike will take place all around the world.

This movement had to happen, we didn’t have a choice. We knew there was a climate crisis. Not just because forests in Sweden or in the US had been on fire; because of alternating floods and drought in Germany and Australia; because of the collapse of alpine faces due to melting permafrost and other climate changes. We knew, because everything we read and watched screamed out to us that something was very wrong.

That first day of refusing to go to school was spent alone, but since then a movement of climate strikers has swept the globe. Today young people in more than 100 countries will walk out of class to demand action on the greatest threat humankind has ever faced.

These strikes are happening today – from Washington DC to Moscow, Tromsø to Invercargill, Beirut to Jerusalem, and Shanghai to Mumbai – because politicians have failed us. We’ve seen years of negotiations, pathetic deals on climate change, fossil fuel companies being given free rein to carve open our lands, drill beneath our soils and burn away our futures for their profit. We’ve seen fracking, deep sea drilling and coalmining continue. Politicians have known the truth about climate change and they’ve willingly handed over our future to profiteers whose search for quick cash threatens our very existence.

This movement had to happen, we didn’t have a choice. Last year’s UN Intergovernmental Panel on Climate Change’s special report on global warming could not have been clearer about the extreme dangers of going beyond 1.5C of global warming. To have any chance of avoiding that extreme danger emissions must drop rapidly – so that by the time we will be in our mid- and late-20s we are living in a transformed world.

The students who are striking in cities, towns and villages around the world are uniting behind the science. We are only asking that our leaders to do the same.

If those in power today don’t act, it will be our generation who will live through their failure. Those who are under 20 now could be around to see 2080, and face the prospect of a world that has warmed by up to 4C. The effects of such warming would be utterly devastating. Rivers would flood, storms would wreak havoc on coastal communities and coral reefs would be eliminated. Melting polar ice caps would lead to dramatically higher sea levels, flooding coastal areas. Places on Earth will become uninhabitable. Advertisement

Scientists have also shown us that burning fossil fuels is “the world’s most significant threat to children’s health”. Nine out of every 10 children around the world are breathing dangerous air. Our lives are being compromised before we are born. Toxic particles from exhaust fumes pass through the lungs of pregnant women and accumulate in the placenta. The risk of premature birth, low birth weight and cognitive dysfunction this causes is a public health catastrophe. Pollution from diesel vehicles is stunting the growth of our lungs, leaving us damaged for life. Toxic air from burning fossil fuels is choking not only our lungs but our hopes and dreams.

And the worst effects of climate change are disproportionately felt by our most vulnerable communities. This is not just about cutting down emissions, but about equity – the system we have right now is failing us, working only for the rich few. The luxury so few of us enjoy in the global north is based on the suffering of people in the global south.

We have watched as politicians fumble, playing a political game rather than facing the facts that the solutions we need cannot be found within the current system. They don’t want to face the facts – we need to change the system if we are to try to act on the climate crisis.

This movement had to happen, we didn’t have a choice. The vast majority of climate strikers taking action today aren’t allowed to vote. Imagine for a second what that feels like. Despite watching the climate crisis unfold, despite knowing the facts, we aren’t allowed to have a say in who makes the decisions about climate change. And then ask yourself this: wouldn’t you go on strike too, if you thought doing so could help protect your own future?

So today we walk out of school, we quit our college lessons, and we take to the streets to say enough is enough. Some adults say we shouldn’t be walking out of classes – that we should be “getting an education”. We think organising against an existential threat – and figuring out how to make our voices heard – is teaching us some important lessons.

We’ve relied on adults to make the right decisions to ensure that there is a future for the next generation – surely we don’t have all the answers. But what we do know is that we need to keep fossil fuels in the ground, phase out subsidies for dirty energy production, seriously invest in renewables and start asking difficult questions about how we structure our economies and who is set to win and who is set to lose.

And we are no longer alone. Tens of thousands of scientists from around the world have released statements in support of the strikes by children. The scientists have been very clear about what we need to do to tackle climate change. We are uniting behind the scientists. We are only asking that our leaders do the same.

It is so important that this happens now. The kind of changes that need to happen mean everyone recognising that this is a crisis and committing to radical transformations. We strongly believe that we can fight off the most damaging effects of climate change – but we have to act now.

There is no grey area when it comes to survival. There’s no less bad option. That’s why young people are striking in every corner of the globe, and it’s why we are asking that older people join us on the streets too. When our house is burning we cannot just leave it to the children to pour water on the flames – we need the grownups to take responsibility for sparking the blaze in the first place. So for once, we’re asking grownups to follow our lead: we can’t wait any longer.

This movement had to happen. And now, you adults have a choice.

Anna Taylor is a UK leader of the youth climate strike