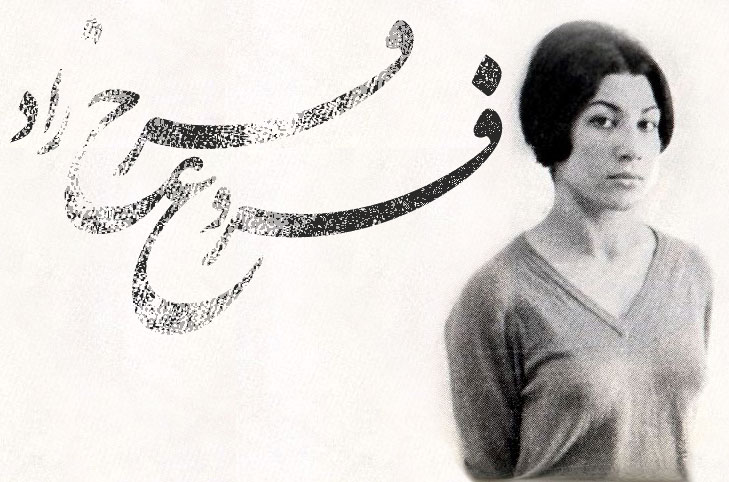 Forugh, one of the most famous Persian Women poets died in a car crash February 13, 1967 at the young age of 32. Poems such as “Reborn”, “The Wind Will Take Us”, “Sin” and “Let us believe in the dawn of the cold season” left an unmistakeably unique and indelible mark on Middle Eastern literature.

My entire soul is a murky verse
Reiterating you within itself
Carrying you to the dawn of eternal burstings and blossomings
In this verse, I sighed you, AH!
In this verse,
I grafted you to trees, water and fire

Perhaps life is that blocked moment
When my look destroys itself in the pupils of your eyes
And in this there is a sense
Which I will mingle with the perception of the moon
And the reception of darkness
In a room the size of one solitude
My heart
The size of one love
Looks at the simple pretexts of its own happiness,
At the pretty withering of flowers in the flower pots
At the sapling you planted in our flowerbed
At the songs of the canaries
Who sing the size of one window.
Ah
This is my lot
This is my lot
My lot
Is a sky, which the dropping of a curtain seizes from me
My lot is going down an abandoned stairway
And joining with something in decay and nostalgia
My lot is a cheerless walk in the garden of memories
And dying in the sorrow of a voice that tells me:
“I love
Your hands”
I will plant my hands in the flowerbed
I will sprout, I know, I know, I know
And the sparrows will lay eggs
In the hollows of my inky fingers
I will hang a pair of earrings of red twin cherries
Round my ears
I will put dahlia petals on my nails
There is an alley
Where the boys who were once in love with me,
With those disheveled hairs, thin necks and gaunt legs
Still think of the innocent smiles of a little girl
Who was one night blown away by the wind
There is an alley which my heart
Has stolen from places of my childhood
The journey of a volume along the line of time
And impregnating the barren line of time with a volume
A volume conscious of an image
Returning from the feast of a mirror
This is the way
Someone dies
And someone remains
No fisherman will catch pearls
From a little stream flowing into a ditch
I Know a sad little mermaid
Dwelling in the ocean
Softly, gently blowing
Her heart into a wooden flute
A sad little mermaid
Who dies with a kiss at night

“Of course we compose poetry out of personal need, an irresistible calling…but what happens after we commit our poems to the page? We must be judged and feel that we have made a difference, made a connection, and that we are responsible. But how can one look fondly at, or even expect an answer from a society that is shapeless, without an ideal, refusing any sort of responsibility, its only movement being from a season of mating to a season of grazing? In this field, an artist’s work is private and individualistic. How long can he or she survive this isolation, conversing only with the door and the four walls? This is a question, the answer to which lies in the capacity and forbearance of each individual artist. Those who grow silent or have nothing more to say, had better keep thier peace, otherwise their ability to cope with this frightful sewage becomes impossible, and they find themselves abandoned and useless. The only way to survive is that one shoud reach such a state of detachment and maturity that he or she can become both a builder of and a mouthpiece for her world, both an observer and a judge.” Forugh Farrokhzad

Conquest of the garden: فتح باغ

The crow that flew over us and sank-
in the confusion of a vagabond cloud;
The crow that swiftly crossed-
the extent of the sphere-
like a short arrow-
will tell about us-
in the town.

For you and I,
it is not about a frail union of two names-
in the aged pages of a registrar notebook.
It is about my fortunate locks-
and the burning stroke of your kiss.

For you and I,
it is about the imminence of our skins-
in the sacred wellspring of lightly streams,
swiftly sliding -over the waterfalls and the hills.

And,
it is about the fountain’s songs-
its fleeting flight, its short, silvery life.

You and I,
in the core of a darkened night,
in the fluid freshness of forests,
on the peak of shielding mounts,
and in a freezing fearful sea-
asked young, golden eagles-
what we ought to do.

Everybody knows.
Now, everybody knows that you and I,
in an endless instant, conquered the entirety of Eternity.

It is about burning every futile piece-
in the garnet core of the flames.

And it is about our hands-
that contrived a bridge,
concrete and bright,
over the tear of night.

The shades of dusk-
are floating in their veiled sorrow.

And doves,
from the windows of their white tower-
are looking at Earth.

Come to the turf!

It is only sound that remains تنها صداست که میماند

Why should I stop, why?
the birds have gone in search
of the blue direction.
the horizon is vertical, vertical
and movement fountain-like;
and at the limits of vision
shining planets spin.
the earth in elevation reaches repetition,
and air wells
changes into tunnels of connection;
and day is a vastness,
which does not fit into narrow mind
of newspaper worms.

why should I stop?
the road passes through the capillaries of life,
the quality of the environment
in the ship of the uterus of the moon
will kill the corrupt cells.
and in the chemical space after sunrise
there is only sound,
sound that will attract the particles of time.
why should I stop?

what can a swamp be?
what can a swamp be but the spawning ground
v
of corrupt insects?
swollen corpses scrawl the morgue’s thoughts,
the unmanly one has hidden
his lack of manliness in blackness,
and the bug… ah,
when the bug talks,
why should I stop?
cooperation of lead letters is futile,
it will not save the lowly thought.
I am a descendant of the house of trees.
breathing stale air depresses me.
a bird which died advised me to
commit flight to memory.
the ultimate extent of powers is union,
joining with the bright principle of the sun
and pouring into the understanding of light.
it is natural for windmills to fall apart.

why should I stop?
I clasp to my breast
the unripe bunches of wheat
and breastfeed them

in the land of dwarfs,
the criteria of comparison
have always traveled in the orbit of zero.
why should I stop?
I obey the four elements;
and the job of drawing up
the constitution of my heart
is not the business
of the local government of the blind.

what is the lengthy whimpering wildness
in animals sexual organs to me?
what to me is the worm’s humble movement
In its fleshy vacuum?
the bleeding ancestry of flowers
has committed me to life.
are you familiar with the bleeding
ancestry of the flowers?

One Comment on “Three poems by Forugh Farrokhzad, a woman alone”